Over the last two days, hundreds of thousands again took to the streets in support of the sit-ins in Khartoum and various cities in Sudan calling for justice and the handover of power by the Interim Military Council. In Khartoum today, thousands massed at the site of the sit-in outside the military headquarters for Friday prayers.

Protest marches took place in Khartoum and other cities in the country “to guard and protect the gains of the revolution” and demand the Interim Military Council to hand power to a civilian government as stated in the Declaration of Freedom and Change, a broad coalition of opposition parties and the major force behind the Sudan uprising.

The sit-in outside the general command of the Sudanese Armed Forces, that has been sustained since April 6, continues to swell, and witness an outpouring of community mutual help and cohesion, coupled with creativity from artists, who are turning the walls and streets around the sit-in into a living art exhibition honouring the history of revolutionaries in Sudan.

Again, many officers and non-commissioned officers of the Sudanese army were seen mingling with the protesters and carried shoulder-high, indicating growing support among army personnel for the popular uprising. 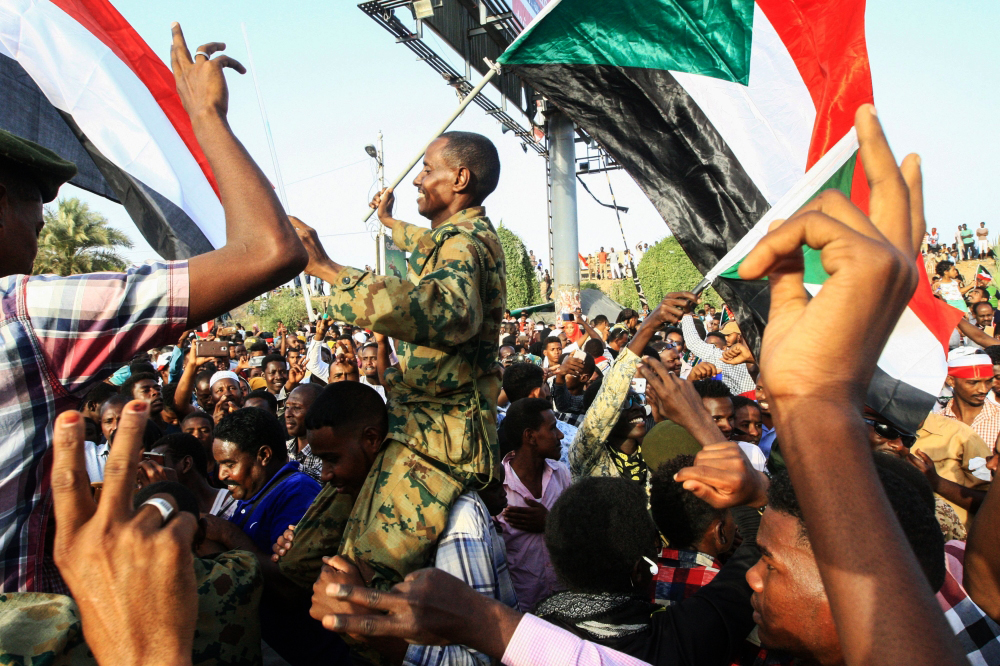 Today, thousands once again stood shoulder to shoulder at the downtown Khartoum site to turn towards Mecca in massed Friday prayers.

El Obeid in North Kordofan, El Fasher, El Geneina, Nyala and Ed Daein in Darfur, Singa, Ed Damazin, El Gedaref, Port Sudan in eastern Sudan, and El Gezira state witnessed marches by all segments of society to sit-ins in front of army units to demand the handing of power to the people, the arrest of all the symbols of the former regime who were involved in corruption, the dismantling of all the joints of the ‘deep state’, and bringing those accused of crimes to justice. 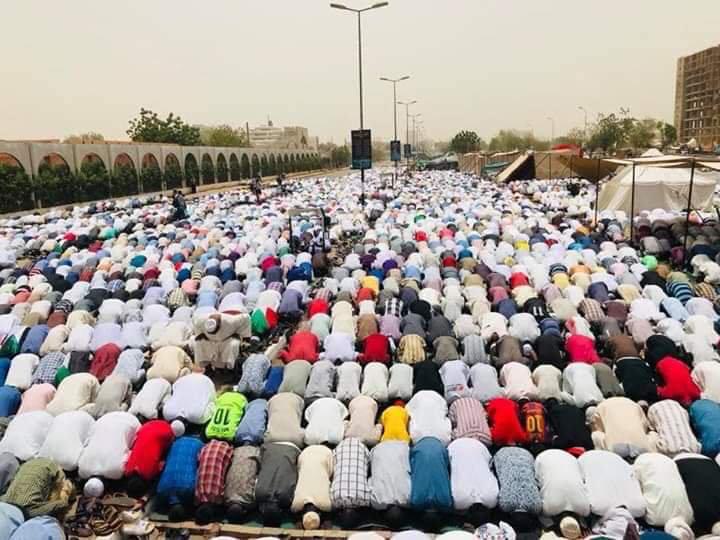 Lawyers in El Geneina, capital of West Darfur, marched from the courts complex in the city to the government secretariat, where leading members of the West Darfur Bar Association handed a memorandum to Acting Governor Maj Gen Abdelkhalig Badawi, demanding the implementation of all the demands agreed upon by the Sudanese in the Declaration of Freedom and Change.

Lawyer Feisal Abdallah said that the memo also called for the need to legalise the state’s justice systems, the arrest of the corrupt and those suspected of corruption, bringing them to justice and dismantling the interfaces of the former regime and the subsidiaries of the National Congress Party.

He said that lawyers in West Darfur are an integral part of the revolution and eager to achieve their demands. 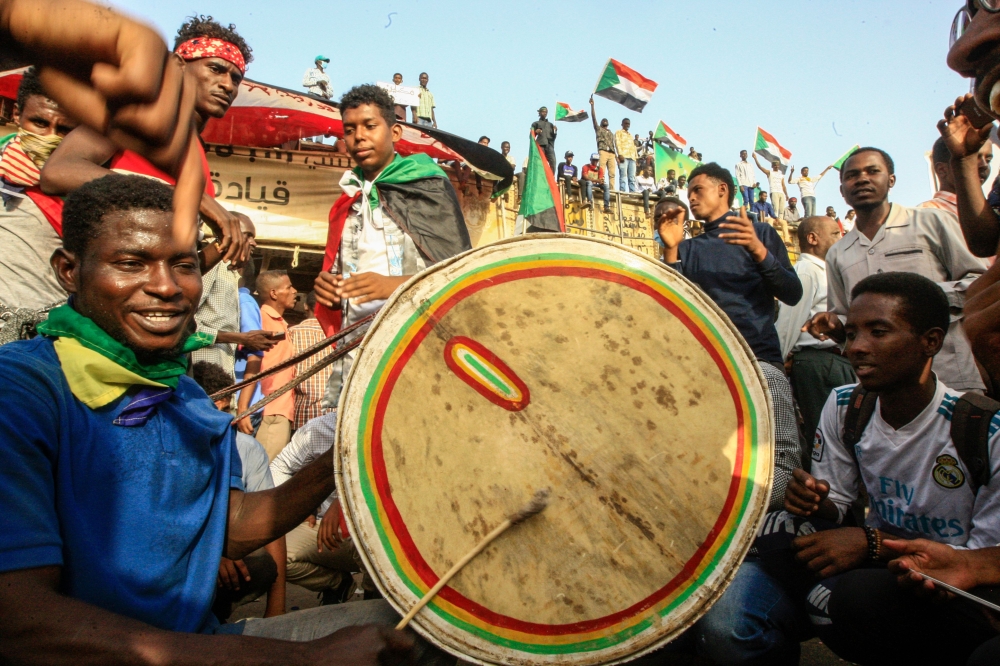 On Thursday afternoon, professionals and families of the people killed during the 2005 massacre of Beja members in Port Sudan marched in support of the steadfastness of thousands of protesters at the sit-in in front of the 101st Marine Command. The voiced support of their legitimate demands of prosecuting the corrupt and forming a civilian government in accordance with the Declaration of Freedom and Change and the vision presented to the Interim Military Council.

The marches, in which tens of thousands of people participated, demanded that power be handed to a new transitional civilian regime, using loudspeakers on cars that repeated national songs.

The marches moved through the streets of the main market in Port Sudan until the demonstrators merged into the sit-in crowd in front of the 101 Marines Command in Port Sudan.

El Fasher in North Darfur witnessed a march that arrived at the sit-in in front of the Nabdelhaya Hospital near the Grand Market demanding the Sudan’s Military Council to hand power to civilians according to the Declaration of Freedom and Change.

Fatima Fadul told Radio Dabanga that the protesters demanded the handover of power to civilians, the dismantling of the ‘deep state’, the need to enable a delegation of professionals and Declaration of Freedom and Change to see Al Bashir and the figures of the regime in detention. The protesters also demanded the handover of Al Bashir and others accused war crimes, genocide, and rape in Darfur to the International Criminal Court.

She also demanded a speedy stop and halt of the crimes according to a special programme for displaced people and refugees, helping them to return to their villages and land and empowering them.

In Nyala in South Darfur thousands of people demonstrated in support of the demands of the Sudanese revolution.

The protest march arrived at the police station near the military garrison, announcing the joy of the fall of the regime and its figures.

Activist Ahmed Mustafa told Radio Dabanga that the protesters handed a memorandum to the commander of the military garrison in which they demanded the Military Council to hand power to civilians, dismantle the deep state and arrest all figures of the former regime in accordance with the Declaration of Freedom and Change.

El Obeid, capital of North Kordofan, saw three marches in which thousands of people participated in the sit-in in front of the military garrison where the protesters presented memos to the leadership of the garrison demanding the handover of power to civilians, and the seizure of the National Congress Party offices, terminating the service of the undersecretaries of ministries in the state, arresting of leaders and figures of the political and military regime and the freezing of their assets and funds.

On Wednesday, residents of El Gedaref staged a mass demonstration demanding retribution against the killers of more than 23 peaceful protesters in the town in December.

Demonstrators told Radio Dabanga from El Gedaref that the demonstration moved from the El Gedaref Teaching Hospital until the sit-in in front of the command of the second Infantry, carrying banners with pictures of martyrs, slogans calling for retribution, freedom, justice and peace.

On Thursday, tens of thousands of people marched in Singa, capital of Sennar, and Ed Damazin, capital of Blue Nile state in support of the sit-ins and to demand the revolution to be fully implemented calling on the Interim Military Council to hand power to a civilian government as stipulated in the Declaration of Freedom and Change and the arrest of all figures of the former corrupt regime who looted public money and bring them to trial.

Yesterday, thousands of people marched in the Blue Nile state in support of the demands of the revolution starting from the Blue Nile University and arrived at the army headquarters of Ed Damazin.

The Chairman of the Political Committee of the Transitional Military Council (TMC), Lt. Gen. Omer Zainal-Abidin, met at the Republican Palace Thursday with a delegation of the National Change Front, headed by the front’s Presidential Council, Dr. Ghazi Salahuddin.

The National Change Front was involved with the Natioal Dialogue under the former regime, and should not be confused with the Declaration of Freedom and Change forces who are the organisers of the current campaign of popular poritest.

In a press statement vis the official Sudan News Agency (SUNA), Dr. Ghazi said that the meeting has reviewed the front’s vision on the political and security situation in Sudan, affirming that The change brought about by the Armed Forces is a bias to the people was necessitated by the need to overcome the crisis and to take the country to safety.

He said that the current stage requires moving to re-build the state in consultation with civil forces and to fight the trend of exclusion among political forces.

He said that the Front has pledged to prepare a written vision on the structure of the state and reform and promote peace through dialogue with the Armed Forces.

Dr. Ghazi pointed out that the National Change Front also gave a proposal on formation of the government system and establishment of a legislative body with powers and jurisdiction to create a balance between the presidential and parliamentary system.

Hassan Osman Riziq and a number of the front’s members have lauded the Armed Forces’ bias to the people and the decisions taken by the Transitional Military Council for releasing the political detainees and formation of a civilian government, calling for fair trials to the corrupts and those who killed the revolutionaries.

They stressed the importance of establishing balanced regional and international relations, asserting that the front will a strong boost to the Transitional Military Council in the current stage.

Flying the flag for Sudan – what flag is that?