Demonstration in Khartoum on 16 January (RD)

Eight journalists, including correspondents of Reuters and AFP, are being held in detention by the Sudanese security service. The print-runs of two newspapers were seized yesterday in Sudan’s crackdown on media coverage of the ongoing price hike protests.

Sudan’s security apparatus, the National Intelligence and Security Service (NISS), confiscated the entire print-runs of El Jareeda and El Midan newspapers from the printing presses, for the second time this week. The reason for the confiscation of Thursday’s issues is the articles they contained about the sharp rise of prices and arrests of demonstrators in Omdurman and Khartoum.

Ashraf Abdelaziz, editor-in-chief of El Jareeda, told Radio Dabanga that the security apparatus had issued strict instructions to the newspapers not to cover these events. A NISS officer contacted Abdelaziz, telling him and his journalists not to attend or cover the demonstrations.

“But I assured the officer that we will cover the events, as it is our professional and moral duty.”

The issue of El Jareeda on Thursday would inform readers about the peaceful protests in Khartoum and Omdurman, the march of the Sudanese Communist Party, and what took place at the schoolyard of El Ahliya in Omdurman. Here, NISS officers had pre-emptively flooded what was to be the venue of a vigil held by opposition parties, civil society and student groups.

“So we were surprised by the confiscation of all newspaper copies by the security apparatus, without giving us any reasons for it.”

The editor-in-chief explained that such confiscations that happen after printing but prior to distribution, cause newspapers huge economics losses. “Yesterday our losses exceeded SDG 40,000 ($5,677*). It is an attempt by the NISS to tear down the newspapers and silence voices during events and important issues that concern the homeland.”

Also on Tuesday morning the NISS confiscated El Jareeda and El Midan print-runs. For El Jareeda it is the third time its print-run has been seized for its coverage of the price hike protests. 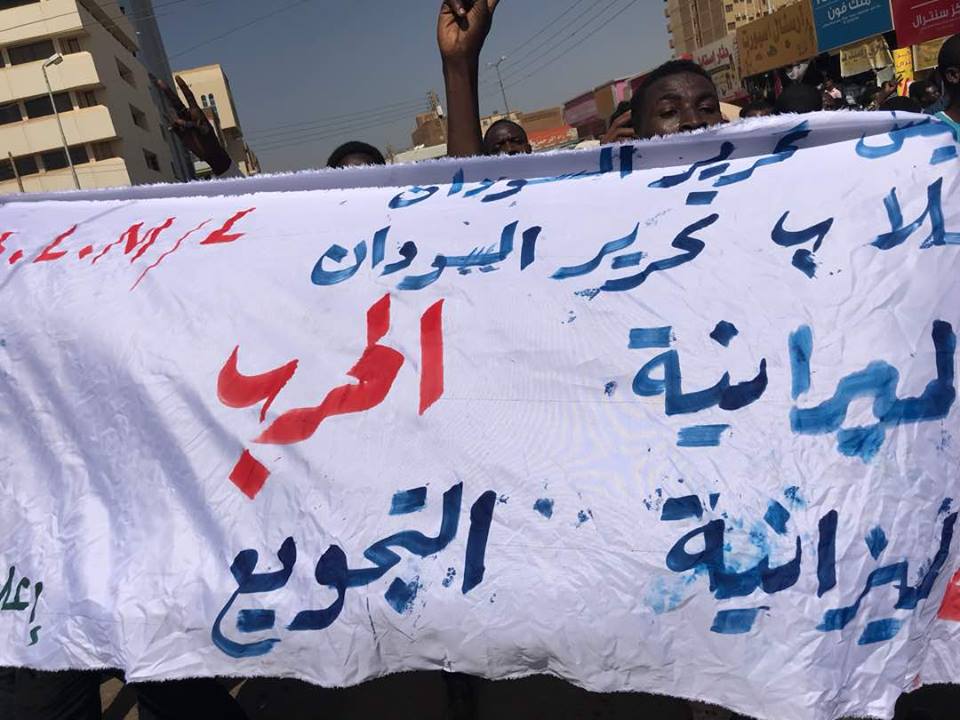 Journalists involved in the coverage of the Omdurman protest this week reported to Radio Dabanga that there was a strict ban on photography on the penalty of detention, even journalists and satellite channels.

Eight journalists remained in detention by the security apparatus on Thursday, the Sudanese Journalists’ Network (SJN) said in a statement. All had covered the marches and vigils in Khartoum and Omdurman against the rise of prices on Tuesday and Wednesday.

Abdelmunim Abu Idris who is a correspondent of French press agency AFP, Khalid Abdelaziz, a correspondent of Reuters, and editor Shawgi Abelazim (El Youm El Tali) were detained on Wednesday at the vigil in El Ahliya, bringing the number of journalists in detention to eight.

The Committee to Protect Journalists (CPJ) issued a condemning statement saying that Sudanese authorities should cease harassing and arresting journalists and confiscating newspapers, and should allow journalists to report on matters of public interest without fear of reprisal.

SJN renewed its demand to the Sudanese authorities to release these journalists immediately, warning the NISS not to subject them “to any type of torture”.

People have held demonstrations nearly every day this month against the sharp price increases following the higher taxes in Sudan on consumer goods, including flour and fuel, that the new annual budget includes.

In addition to this, the statutory increase in the customs price of the US Dollar from SDG 6.7 to SDG 18 caused a rise in the Dollar exchange rate in the parallel market. The Dollar rate in the black market increased with six Sudanese Pound in less than two weeks.

The new budget has been criticised for allocating the majority of funds to security, defence and presidential expenditures.

Committee to Protect Journalists calls on Sudan to release reporter