A compact digest of the past week's most-read highlights, from the heart of Sudan. Subscribe to receive this digest weekly in your inbox.

October 11 - 2021 NEW YORK For decades, Sudan has suffered from economic mismanagement and corruption. Since the overthrow of the former regime of Oma Al Bashir in 2019, the transitional government has yet to transparently address the country’s inherited issues in the banking and financial sectors.

The latest briefing from The Sentry published last week, asserts that in order to rebuild the country’s economy, mitigate risks, and encourage foreign investment, banking reform must be prioritised.

Sudan Banking Sector Reforms and Asset Recovery, by The Sentry’s Senior Advisor Oliver Windridge, offers recommendations for how Sudan can begin to engage in transparent, democratic, and innovative economic rebuilding.

The briefing offers concrete steps that can be taken, including asset recovery, increased transparency, and stronger enforcement of existing laws and policies. The USA, the UK, and other international stakeholders all have a role to play in supporting Sudan’s recovery.

October 6 - 2021 KHARTOUM The High Council of Beja Nazirs and Independent Chieftains will adhere to their demands concerning the cancellation of the Eastern Sudan Track of the 2020 Juba Peace Agreement, and the formation of a ‘government of technocrats’.

Beja community leaders stated on Tuesday that they will continue their protest actions for a just development of the region (Red Sea state, Kassala, and El Gedaref).

Last month, followers of the Beja Nazirs Council blocked the Khartoum-Port Sudan highway and other roads. Most of the ports were closed as well. During a visit of a high-level government delegation from Khartoum in end September, it was agreed to continue negotiations.

Darfuri rebel leaders however commented on the demands by stating that it is impossible to change parts of the Juba Peace Agreement, as this will lead to the “collapse” of the entire accord.

According to the Ministry of Transport, the closure of the Red Sea state Southern Port has already caused large losses to the Sudanese treasury. 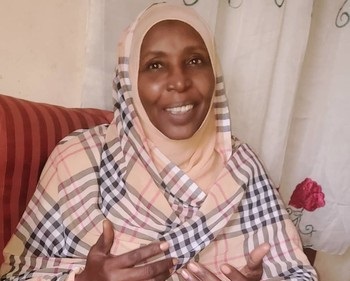 October 12 - 2021 DABANGA SUDAN For Radio Dabanga’s Inspirational Women series, we spoke with agricultural engineer Souad El Tayeb on her fight for food security in Darfur, the importance of training women, and the lack of government support.

Born in West Darfur in 1957, Souad was the first woman from Darfur to study at the University of Khartoum. She became a pioneer within the horticultural sector in sustainable food preservation in Sudan and abroad.

A scholarship in 1988 at the Faculty of Agriculture of the University of Khartoum was an opportunity for her to work on her master’s thesis on mango harvesting and preservation. In the following years, she trained several groups of women in West Darfur, in the hope that the state government would provide aid, but “unfortunately, there was no interest”.

Many years later, Souad is still trying to develop a state strategy for environmentally and economically sustainable mango production and trade chains. “The loss of crops exceeds 50 per cent at the moment, whilst mangoes could be a secure product that helps fight poverty and hunger if we direct our energies towards rural economic development,” she stated.

Kordofan, Darfur shootings leave seven dead
October 11 - 2021 DALAMI / EL GENEINA / GIREIDA Seven people including two children have died and at least five others were injured in a series of attacks by armed men on villages in South Kordofan, as well as West and South Darfur.

Sudan PM briefs envoys, FFC on talks with military
October 8 - 2021 KHARTOUM Sudanese Prime Minister Abdallah Hamdok briefed the members of the Central Leadership Council of the Forces for Freedom and Change in Khartoum on Wednesday on the results of his meetings with military ...