The Sudan People’s Liberation Movement-North (SPLM-N), chaired by Abdelaziz Adam El Hilu, has declared a unilateral cessation of hostilities in the South Kordofan region for four months. This weekend the Khartoum government and the armed movement plan to resume peace negotiations in Ethiopia.

The ceasefire will go into effect on February 1, the SPLM-N statement, received by Radio Dabanga (below), reads. The declaration refers to the ceasefire which the movement signed in August last year, at the height of internal tensions, and is “a gesture of goodwill to give chance for a peaceful resolution of the conflict in Sudan”.

El Hilu directed all forces and units to cease any hostile acts except in case of self-defence and protection of civilians.

This Saturday and Sunday the SPLM-N peace negotiators meet again with the Sudanese government’s delegation, in Addis Ababa. The head of the government delegation, Presidential Assistant Ibrahim Mahmoud, said that the talks will focus on the views of the parties towards the African Union’s proposed roadmap for the peace process in the Two Areas (South Kordofan and Blue Nile states).

President Omar Al Bashir announced a similar ceasefire in the Two Areas from October to December 2017. The rebel movement had declared a ceasefire in August, a month after El Hilu was temporarily appointed SPLM-N chairman. The leadership dispute and internal tensions have caused a rift in the rebel group.

The other faction is now led by former SPLM-N chairman Malik Agar in Blue Nile state. He said that his faction will not participate in the February negotiations on the Two Areas in Addis Ababa. He branded the talks “part of the Sudan government's strategy of a piecemeal solution”.

In South Kordofan, humanitarian access has remained cut off for the now less than 25,000 people who live in the SPLM-N controlled area, according to a monitoring unit. In the state’s government-controlled areas, 354,500 people were in need of humanitarian assistance in 2017, including 218,500 displaced and refugees.

In August 2016, peace negotiations between the Sudanese government and the SPLM-N on the Two Areas, and the Justice and Equality Movement (JEM) and the Sudan Liberation Movement-MM on Darfur, brokered by the African Union High-level Implementation Panel (AUHIP) in Addis Ababa, collapsed.

Both sides accused the other of obstructing the peace talks. While the introduction of new issues by the JEM and SLM-MM caused the negotiations on Darfur to fail, the provision of humanitarian aid to war victims lead to a deadlock in the talks concerning the Two Areas.

This year, the International Committee of the Red Cross (ICRC) and Khartoum discussed new assistance activities to be carried out in South Kordofan. In addition negotiations between Khartoum and the UN Children’s Fund (Unicef) resulted in access for this organisation to Kurmuk (Blue Nile), as well as in Golo (Central Darfur) and Belle El Sereif (South Darfur). 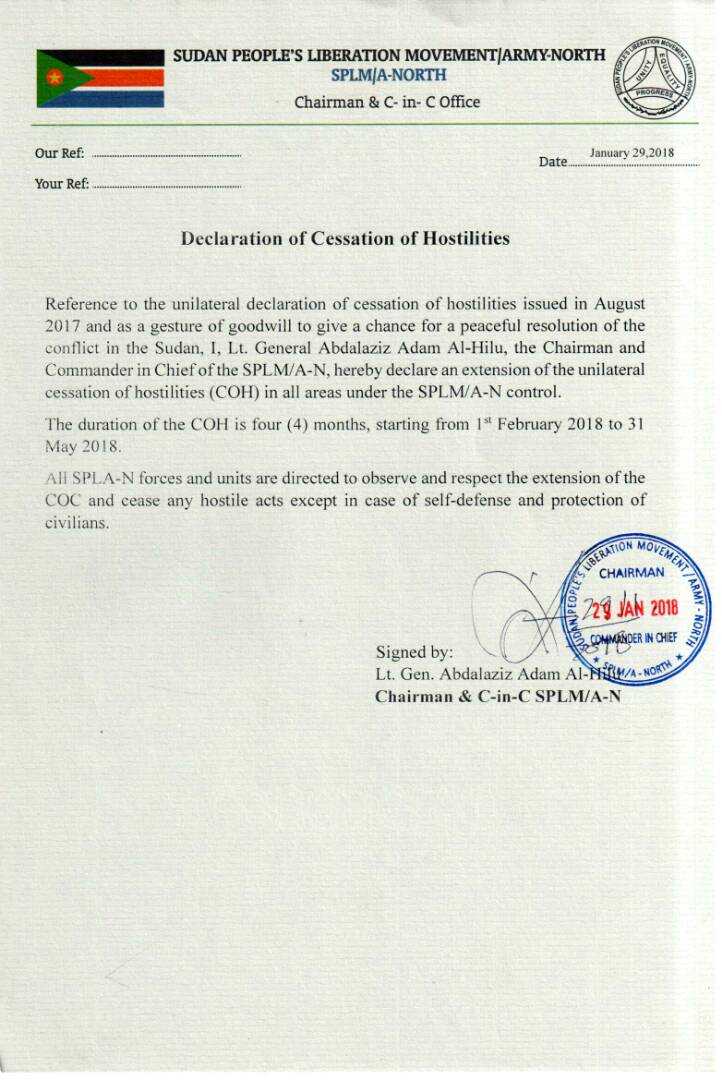 '9,000 displaced' by deadly clashes between SPLM-N factions in Blue Nile