Barricades on the streets of the Sudanese capital, October 26 (Social media)

Protests continued in Khartoum and the states following the military coup on Monday, while main roads and bridges in the capital remain blocked by military forces. New nationwide Marches of the Millions are planned for Saturday. Sudanese holdout rebel leaders, ambassadors, and communities abroad all condemned the overthrow, while eastern Sudanese leaders seem to welcome the coup.

Street protests against the military continued in particular in Khartoum and Atbara in northern Sudan.

As telephone calls from abroad are still possible, Radio Dabanga managed to reach sources in various parts of Sudan. They reported “a complete paralysis” in government and educational institutions in the country, as many people responded to the calls by the Sudanese Professionals Association, the driving force behind the 2018 December Revolution, for civil disobedience actions.

Some roads in the capital witnessed hit-and-run actions between troops and protesters around the barricades. Military forces fired live ammunition in neighbourhoods in the southern part of Khartoum to remove the road blocks set up by protesters.

An unknown number of demonstrators sustained bullet wounds. Many were detained. The Office for the Coordination of Humanitarian Affairs (OCHA) in Sudan reported this morning that seven people have died in the protests so far. At least 170 people have been injured. Hospitals in Khartoum are calling on the Sudanese to donate blood, and on medics to help out treating the wounded.

Small demonstrations were witnessed in Khartoum on Wednesday. They grew much larger in the evening.

Members of the Resistance Committees and other activists continue their preparations and calls for the Marches of the Millions protests against the military planned for Saturday – though military forces are reported to have been going house to house in the Sudanese capital detaining protest organisers. 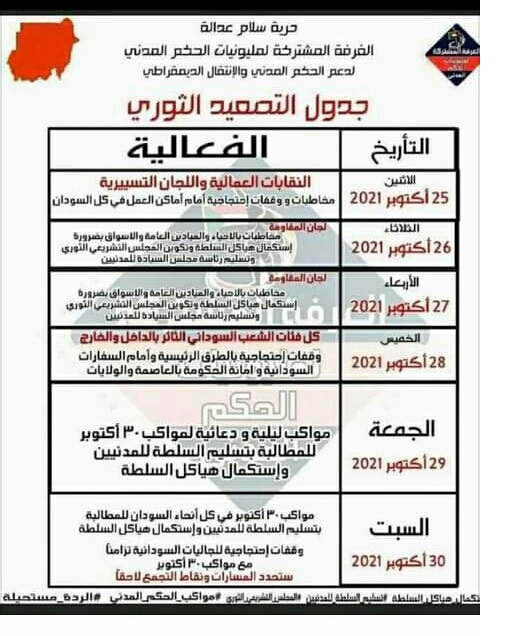 The Joint Chamber of Marches of the Millions for Civilian Rule and Democratic Transition posted its “Revolutionary Escalation Schedule” on social media on Monday, before the internet went down. That day “Trade Unions and Facilitating Committees” were to hold public protest speeches and vigils in the entire country.

On Tuesday and Wednesday members of Resistance Committees would arrange speeches in public places on “the completion of the governance structures, the formation of a Revolutionary Parliament, and handing over the chairmanship of the Sovereignty Council to civilians.

More protest vigils are to be held on Thursday and Friday, demanding a civilian government and the establishment of a transitional parliament. More demos are planned for Friday night, as a prelude to the Marches of the Millions on Saturday.

In various places abroad, Sudanese held protest vigils in support of a civilian government in their country. The hashtags Oct30March (مليونية30اكتوبر#), No Way Back (الردة_مستحيلة#), and Complete Civil Disobedience (العصيان_المدني_الشامل#) are circulated widely on the internet.

Eight of Sudan's ambassadors abroad condemned “the brutal military coup against the revolution” in a joint statement on Tuesday.

Abdelaziz El Hilu, leader of the Sudan People’s Liberation Movement-North (SPLM-N El Hilu) also denounced the coup. “Declaring a State of Emergency undermines the chances of peace and stability in the country,” he said in a statement on Tuesday. He called on SPLM-N “members, allies, and the Sudanese to take to the streets and officially resist the coup”, and on “patriots in the Sudan Armed Forces to protect the people”.

The movement called for the immediate release of PM Hamdok [who was allowed to return home yesterday] and all others who were “arbitrarily detained”. It further condemned the behaviour of the paramilitaries of the Rapid Support Forces in dealing with people who “peacefully demonstrate against the coup”.

The mainstream Sudan Liberation Movement under the leadership of Abdelwahid El Nur (SLM-AW) also condemned “the reckless coup”, and called on the Sudanese to resist it. In a statement issued by its president on Tuesday, the movement demanded the immediate release of Hamdok and handing over the reins of power to a civilian government.

It called on “all political and civilian forces to unite, forget the differences, and work as one to defeat the coup and restore the hijacked revolution”.

On Tuesday as well, the Democratic Unionist Party demanded “the immediate release of all political detainees”, and urged the parties to return to the negotiating room to overcome this national impasse.

There have been conflicting reports about the opening of the Red Sea ports and the Port Sudan-Khartoum highway in eastern Sudan that were blocked 42 days ago by angry Beja activists in protest against the Eastern Sudan Track protocol of the October 2020 Juba Peace Agreement.

Sources from Port Sudan reported that ports and roads were partially opened to lorries after the speech of coup leader Lt Gen Abdelfattah El Burhan on Tuesday.

Members of the High Council of Beja Nazirs and Independent Chieftains allowed the passage of lorries carrying humanitarian aid items and other suspended materials. In a press statement, they said they are waiting for the return of the government delegation to further discuss their demands.

According to OCHA Sudan this morning, “A convoy with 29 containers of humanitarian cargo left Port Sudan on 26 October and is on its way to its final destination.”

Beja Nazir Karar Askar said that the closure of the ports and the Port Sudan-Khartoum highway that entered its the 41st day yesterday, will continue until their demands, the cancellation of the Eastern Sudan Track protocol of the October 2020 Juba Peace Agreement and the establishment of a new negotiating platform for eastern Sudan, have been met.

The head of the council, Nazir Sayed Tirik, announced his support for El Burhan on Tuesday, after the coup leader acknowledged the political demands of the Beja leaders concerning participation in the government. Tirik pledged that they will ease the blocking of the ports and the highway as soon as a part of their demands have been agreed on.