The Ambassador of China to Sudan has announced that Beijing has written-off all government loans to Sudan from before 2016. The Nile River State in northern Sudan plans to export scorpions to China.

At a press conference on the outcomes of the Forum on China-Africa Cooperation (FOCAC) held in the Chinese capital on 3-4 September, Ambassador Li Lianhe said that President Xi Jinping pledged to waiver African countries’ payment of Chinese government loans without interest until the year 2018.

The official Sudan News Agency (SUNA) reported on Thursday that Li expected China to write-off its government debts to Sudan until 2018 as well.

During the visit of the Sudanese president to China in early September to participate in the FOCAC, Al Bashir met with President Xi and secured a pledge for a $58 million grant and a $30 million interest-free loan.

Both countries further signed several cooperation agreements in the fields of agriculture, industry, and customs management.

The envoy announced the formation of a joint committee tasked with “boosting cooperation between Sudan and China in all fields”. He affirmed his country’s keenness to encourage cooperation in the oil sector as well.

He further highlighted the role China is playing in helping African countries to solve their internal issues while respecting their sovereignty.

He added that China will support industrial development in Africa, the building of infrastructures, seek to ease trade and protection of the environment, promote capacity building, health protection, and communication, and support the keeping of peace and security in the continent.

Sudan’s external debt is very high and growing with the pace of the SDG depreciation. It reached $53.35 billion on 31 December 2017.

According to the Central Bank of Sudan, the government accumulated $2.2 billion in debt payments to China between 2010 and 2014. In the same period the Sudanese government was indebted by about $780 million to Kuwait and Saudi Arabia. 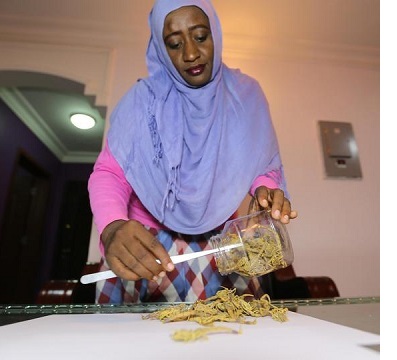 He said that many industries use dried scorpions, Akhbar El Sudan reported on its digital website on Wednesday.

In reaction to Chinese workers catching scorpions in the Lake Nasser in northern Sudan, Sudanese began to catch and dry scorpions to sell to China. In 2016, Sudanese customs agents at Khartoum International Airport seized 200 kilos of dried scorpions on their way to the Asian country.

However, the creatures are also legally exported. Sudanese businesswoman Kawsar Samani obtained a permit to hunt scorpions in northern Sudan and founded a company that exports scorpions to in 2015. Most of them are boiled, dried, and then ground.

They are mostly used for medical purposes; the rest are bought by Chinese restaurants. Scorpions are used in several countries as a supposed sexual stimulant. They are also used for the treatment of cancer.

The arachnids are hunted by forcing them out of their hiding places with water and light. They are then picked-up with aluminium pliers and placed in a glass box, where they are left to breed.

Sudan to get $88 million in loans and grants from China