UPDATED 22:30​ - Sheikh Matar Younis Ali Hussein, a visually impaired religious teacher who was arrested by the Sudanese National Intelligence and Security Services (NISS) in Zalingei city, Central Darfur on 1 April and charged with espionage, was released today in Khartoum.

His co-accused, merchant Adam Haroun, was also released. Both accused were arrested in Darfur and were transferred to Khartoum’s notorious Kober prison, however two weeks ago, the State Security Prosecution withdrew the complaints against them.

The sheik’s arrest prompted an international chorus of condemnation calling for his immediate release.

A relative of Sheikh Matar confirmed his release, and reported that he is in good health considering the circumstances.

In a video interview with Radio Dabanga this afternoon, Sheikh Matar thanked the Darfur Bar Association and other Sudanese Lawyers for conducting his defence, as well as all his supporters in the international community and the displaced and civil society in Sudan for campaigning for his release.

He extended a special vote of thanks to Radio Dabanga and its editorial team: “The radio station has covered our detention and trial every day. This is the only radio station in Sudan that gives a voice to the voiceless. Radio Dabanga always stands up for the oppressed.”

Sheikh Matar concluded: “We will never deny our cause and we will continue our work until Sudan has security and peace and freedom for all Sudanese.”

Sheikh Matar (48) is a religious teacher at the Mosque of Zalingei and father of eight. He is the founder of the Young Rebels Association for Freedom and Democracy has been a vocal critic of the government’s policy in Darfur. In the recent past, he publicly called out the government for hiring thousands of young people in Darfur to join the army and also for distributing weapons in the region. He has also described the peace process in Darfur as ‘false peace’ and called for the protection of displaced people in Darfur. 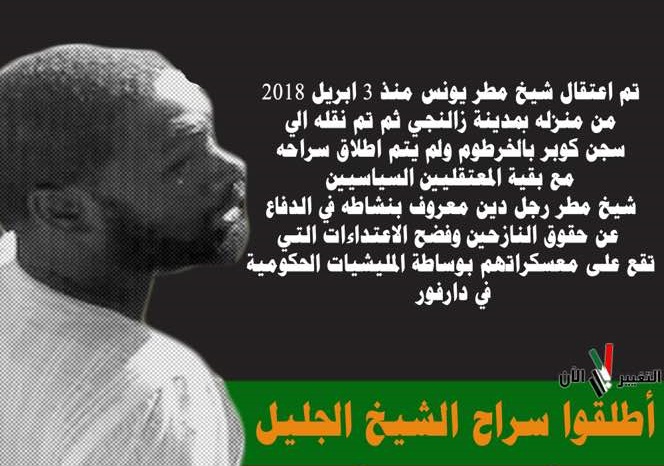 In 2009, NISS officers prevented the sheikh from preaching at the Hasaheesa Mosque in the Central Darfur capital. Security agents attempted to arrest Younis in the stadium of Zalingei in February 2014, but the crowd present at the stadium prevented the action. In 2013 and 2014, the sheikh reported to this station about the Sudanese authorities recruiting young Darfuris to join the paramilitary Rapid Support Forces (RSF) in South Kordofan.

Sudan army, rebels blame each other for Central Darfur clash