Sudan’s Defence Minister, Lt Gen Ahmed Awad Ibn Auf *, who was sworn-in yesterday as interim president of Sudan and head of the military transitional council, has announced that he will step-down after little more than a day in office. His successor, Lt Gen Abdelfattah El Burhan, Inspector-General of the Armed Forces, was sworn-in as new interim president on Friday evening.

Buckling to growing pressure from the Sudanese public, opposition forces, and the international community, Ibn Auf announced this evening that he will step-down as head of the military transitional council, which seized power after deposing and arresting President Omar Al Bashir on Thursday.

Yesterday’s announcement that Al Bashir had been deposed after 30 years of rule was initially welcomed, however news of the succession of Ibn Auf as interim president and head of the military transitional council, which intends to govern Sudan for two years, was met with widespread dismay; the transfer of power was branded a ‘palace coup’ by opposition forces and questioned by the international community, including the UN Secretary-General, the Chairman of the African Union, and the United Kingdom.

Ibn Auf was an unpopular choice. The signatories to the Declaration of Freedom and Change, a broad coalition of opposition parties including the Sudanese Professionals Association, a major force behind the Sudan Uprising, rejected the seizure of power by Sudan’s military, and called on the public to maintain the protests and sit-ins until a civilian interim government is established.

In addition, Ibn Auf was generally viewed as ‘too close to the Al Bashir regime’ (see below) for his appointment to be embraced as a substantial change, especially by the tens of thousands of people who have maintained a continuous 24-hour sit-in outside the General Command of the Sudanese Armed Forces in Khartoum since April 6.

On Thursday night, thousands of people in Khartoum defied the curfew imposed by the military council, as it became clear that yesterday’s military takeover did not lead to a civilian-led government. The mass demonstration lasted well past curfew on Thursday night and Friday morning while it was not clear whether the army would take action against the protesters.

Lt Gen Abdelfattah El Burhan, Inspector-General of the Armed Forces, is not as close to Al Bashir, and the military transitional council clearly hope that Burhan will be more acceptable to the people, who are adamant that the interim government should include civilians, and not replace one military junta for another.

On Friday morning, prior to the announcement by Ibn Auf that he would step down, El Burhan was seen speaking to one of the leaders of the opposition Sudanese Congress Party, Ibrahim El Sheikh, at the sit-in in front of the General Command of the Sudanese Armed Forces. 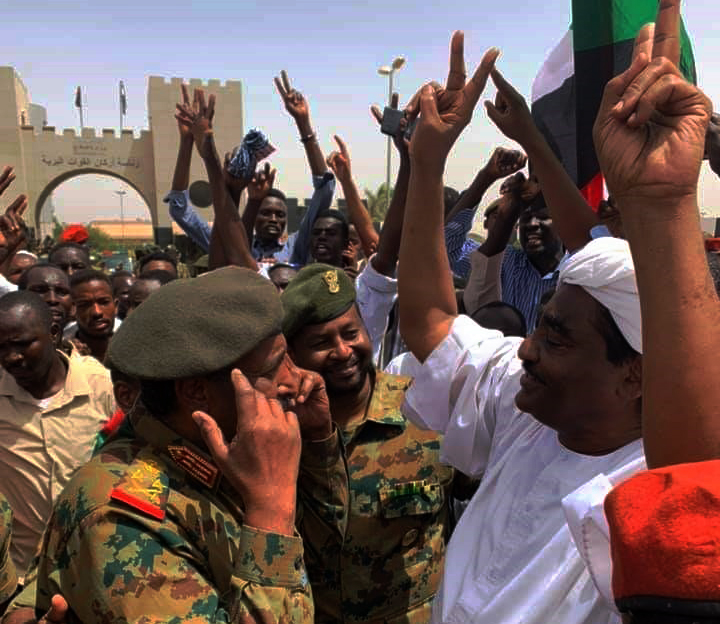 On Friday, Lt Gen Abdelfattah El Burhan was seen speaking to one of the leaders of the opposition Sudanese Congress Party,
Ibrahim El Sheikh, at the sit-in in front of the General Command of the Sudanese Armed Forces

Tens of thousands of Sudanese turned to Mecca for Friday prayers, led by an Imam from within the sit-in area in Khartoum, in what is claimed to be the largest prayer gathering of its kind in history. 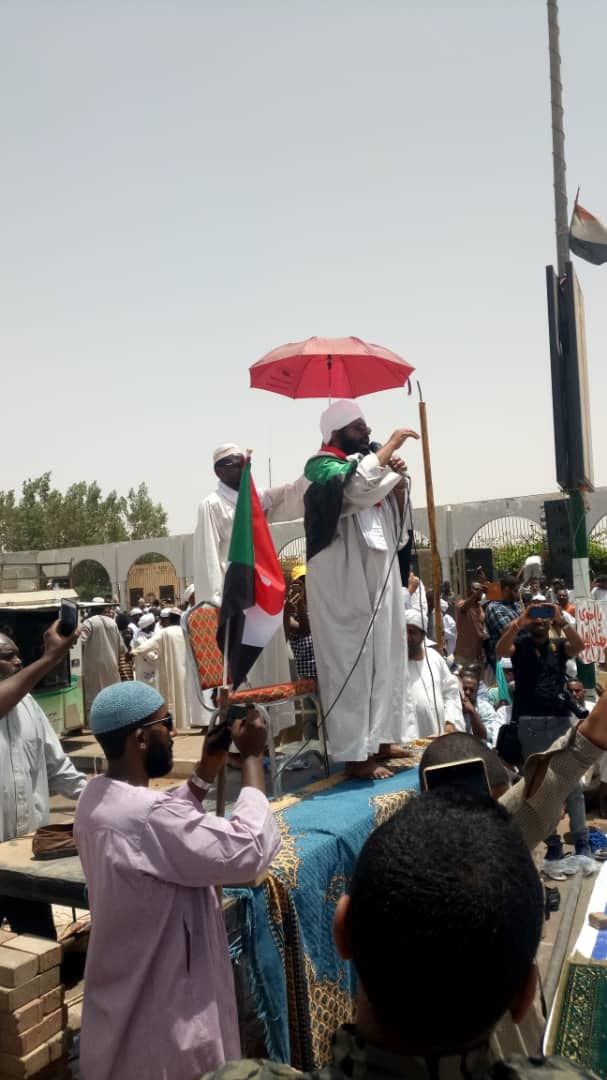 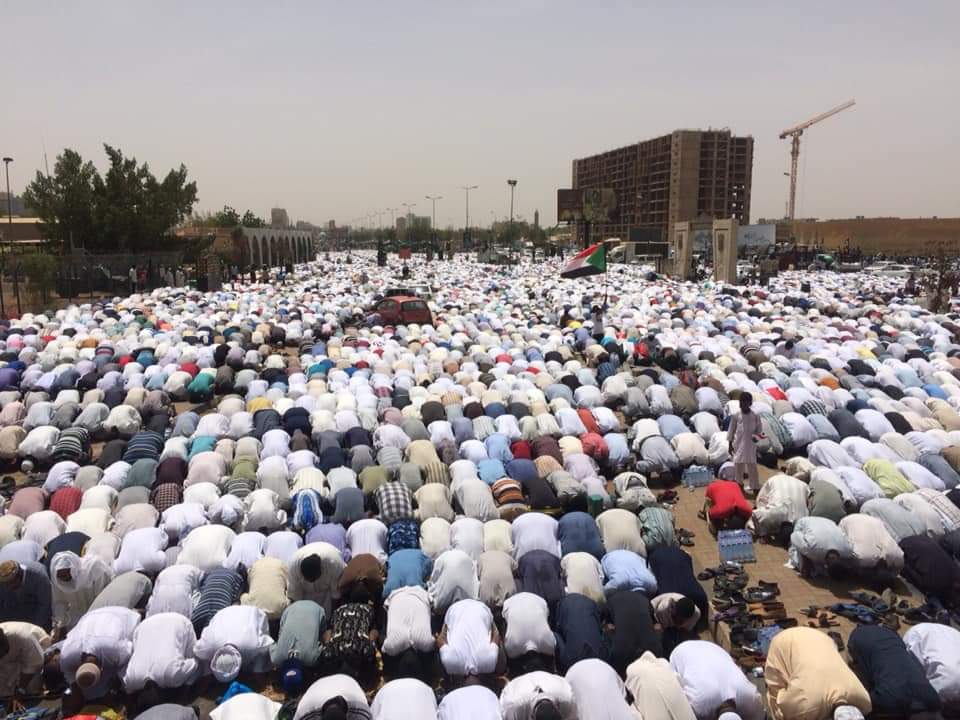 Sudan’s military has an “overarching duty” to refrain from using violence against protesters and ensure that their human rights are protected amid concerns of a further escalation, UN High Commissioner for Human Rights Michelle Bachelet said in a statement on Friday.

Speaking in the Security Council on Friday morning, Sudan’s Deputy Ambassador, Yasir Abdelsalam, said that the military council’s imposition of a State of Emergency for three months, a suspension of the constitution and nightly curfew, had been done in response to “the demands of the crowds…who have expressed their aspirations and their demands”

He said the military council was committed to respecting all international agreements, and “a peaceful transition”, in which it would be the “guarantor” of a return to “civilian government”.

* Lt Gen Ibn Auf previously served as Head of Military Intelligence, and Head of the Joint Chiefs of Staff, before he was appointed Minister of Defence in August 2015. On February 22, when President Al Bashir announced the State of Emergency in the country and dissolved the government (for the third time within one year), Ibn Auf was appointed Vice-President as well.

In May 2007, Ibn Auf was placed on the list of Sudanese individuals sanctioned by the USA because of his alleged role as a liaison between the Sudanese government and the various militias (Janjaweed) in Darfur. He allegedly coordinated Janjaweed operations leading to bombing attacks on civilians and villages, mass rape, and forced displacement.

Sudan opposition to present junta with candidates for transitional council