Yasir Arman defies junta: ‘I will not leave Sudan’

The deputy leader of the Sudan People’s Liberation Movement-North under the leadership of Malik Agar (SPLM-N Agar), Yasir Arman, who arrived in Khartoum on May 26, is defying requests by the ruling Transitional Military Council, that he leave the country.

In a statement on Wednesday, Arman said that he received six letters; five sent by the deputy chairman of the TMC and commander of the paramilitary Rapid Support Forces (RSF), Lt Gen Mohamed Hamdan 'Hemeti', and one by the chairman of the junta, Lt Gen Abdelfattah El Burhan, demanding him to leave Sudan.

“We came and do not carry a pistol. Our only weapon are millions of Sudanese seeking a new homeland,” he stated.

He said that the death sentence issued by a judge in 2014, during the ousted President Omar Al Bashir’s rule, in a trial in absentia against SPLM-N leaders, was “a political ruling par excellence”.

Arman said: “If the TMC does not want to hand Al Bashir and other indicted leaders of the former regime to the International Criminal Court, saying this can only be done by a democratically elected government, why not apply the same logic to the verdicts against us, the leaders of the SPLM-N?” He wondered if the old regime is still present.

Arman considered the rejection of his presence in Sudan as a rejection of peace. “Comprehensive peace could have been a title that could accommodate us all. This decision is wrong and I will not accept it, will not implement it and we will resist it, just as we have resisted the Al Bashir’s regime,” he stated. 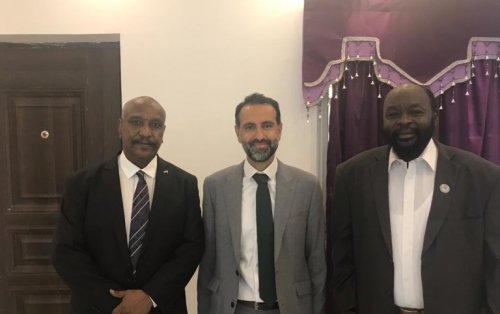 British Ambassador to Khartoum, Irfan Siddiq  met with Arman and Khamis on Wednesday. According to the armed group, the meeting dealt with issues of democratic transition and ways to end the war.

On social media, Siddiq said he was pleased to meet the two SPLM-N Agar leading members and said he would “encourage all the armed movements to return to Sudan and take part in the talks to agree on a civilian-led transition and achieve peace,".

The British All-Party Parliamentary Group for Sudan and South Sudan (APPG) warned against the arrest of the SPLM-N Agar deputy leader saying it will negatively impact the relations of Sudanese junta with the international community.

In a statement by APPG chair David Drew MP, said they received reports about TMC demands that Arman must leave Sudan with the threat of arrest and execution over his head.

"If the Transitional Military Council arrests or deports returning politicians then they can no longer be considered to have any desire to hand over power to a civilian-led government, and this will seriously affect relations with the international community,” the APPG leadership said.

As previously reported by Radio Dabanga, Arman and representatives of the SPLM-N Agar met with US Chargé d’Affaires Steven Koutsis on Monday. The meeting discussed ways forward on the establishment of a civilian-led government.

A statement via the US Embassy in Khartoum said that “any arrangement for the transitional period must include an inclusive dialogue for a lasting peace. All factions willing to join in the process should be allowed to return to Sudan immediately without restrictions.”

Two weeks ago, a SPLM-N advance delegation arrived in Khartoum  and was received by representatives of the Alliance for Freedom and Change and the Sudan Call (a coalition of armed movements, opposition parties, and civil society organisations). It was then announced that SPLM-N Agar leaders would soon travel to Khartoum.