Sudan’s second city of Omdurman, the location of the Houses of Parliament, experienced the largest demonstration of its kind since the outbreak of the current uprising, undeterred by excessive violence from security forces. At least three people have been confirmed killed and dozens wounded.

Tens of thousands of Sudanese marched from El Shuhada market in downtown Omdurman to the Parliament building along the Nile to hand over a memorandum demanding the immediate and unconditional step-down of Al Bashir and his regime from the rule of the country.

At the same time, a rally was held at the Green Square in Khartoum, attended by hundreds supporting President Al Bashir.

The anti-government demonstrations were met by volleys of live ammunition and tear gas from riot police, some of which spilled-over into Omdurman Teaching Hospital. It has been confirmed that at least three protestors have died, however new figures and reports are currently pouring into the Radio Dabanga news desk.

Journalists and witnesses told Radio Dabanga that the crowd started with a number of marches through different roads towards the Parliament. On El Arbaeen Street, one of the main roads, thousands of people joined the protest, shouting slogans for overthrow of the regime and Al Bashir.

In response to the march supporting President Al Bashir at the Green Square the crowd chanted, “People of the Square, we are the sand storm”.

The demonstrations continued until late on Wednesday in the districts of Wad Nubawi, Banat, Beit El Mal, Abbasiya and Morada as the demonstrators placed barricades on main roads to prevent vehicles of the security forces from reaching the demonstrators. 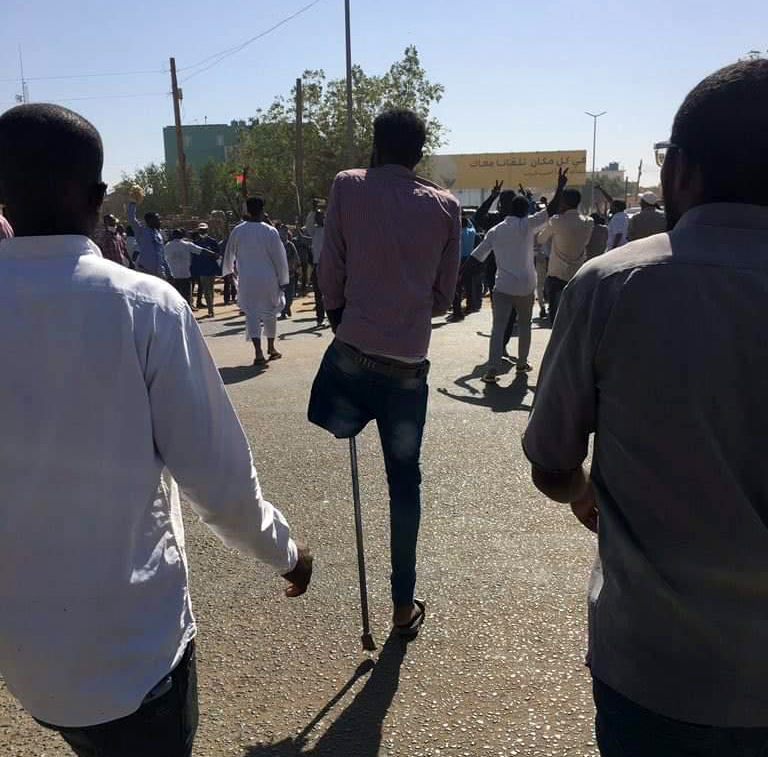 The security forces besieged one of the marching groups near the Military Hospital, not far from the Parliament while other demonstrators managed to reach the vicinity of the National Assembly building.

It pointed out that there were nine cases, including a serious injury subjected to surgery due to a shot in the chest.

The committee condemned the security forces’ violation of the hospital campus of Omdurman by firing bullets and tear gas canisters, causing injury and suffocation to a number of patients and doctors in emergency and intensive care.

In a statement, the General Secretariat of the opposition National Umma Party (NUP) appealed to members of the party and people living in the neighbourhood to immediately go to the Omdurman Teaching Hospital and hospitals in the vicinity to help the wounded, donate blood, and protect the wounded from arrests and violence.

It confirmed to a significant number of cases of serious injury among demonstrators as the result of using live bullets and rubber bullets.

Journalists and witnesses told Radio Dabanga that security forces and the police turned the main roads of Omdurman into a military barracks and a battlefield, where large numbers of vehicles carrying paramilitaries of the Rapid Support Forces (RSF), agents of the National Intelligence and Security Service (NISS), and members of the riot police were deployed more than an hour after the start of the demonstration.

They confirmed that the security forces chased the protesters into the districts and fired live bullets in the residential areas, injuring civilians in their houses.

Largest of its kind

Journalists and independent witnesses described the peaceful procession as the largest of its kind since the coup d’état and the Islamists’ takeover of power in 1989.

Journalists confirmed to Radio Dabanga that the demonstration witnessed unprecedented interaction between the people of Omdurman by providing safe havens for the demonstrators, drinking water, and praying for victory.

Witnesses said that the demonstrators are predominantly young people in their twenties.

On Wednesday afternoon, people in Burri district in Khartoum witnessed simultaneous demonstrations in conjunction with the peaceful march of Omdurman. The demonstrators blocked the road of the Khartoum International Fair. The police and security forces fired dense tear gas inside the district.