The United Nations Secretary-General António Guterres reports that over the past three months, the security situation in Darfur has remained relatively stable. His report was issued this week in terms of Security Council resolution 2429 (2018), by which the Council extended the mandate of the African Union-United Nations Hybrid Operation in Darfur (Unamid) until 30 June 2019, and requested a report, every 90 days, on its implementation.

Guterres: “The security situation in Darfur has remained relatively stable, except for intermittent clashes between the Sudanese Armed Forces and the Sudan Liberation Movement Abdul Wahid (SLM-AW) faction in Jebel Marra that resulted in civilian displacement. No major episodes of intercommunal violence were reported. Incidents of crop destruction, which often spark local-level confrontations, were also on the decline.”

He says that “the reporting period saw some progress in the Darfur peace process. Together with the Sudan Liberation Movement/Transitional Council (SLM/TC), the Sudan Liberation Army/Minni Minawi (SLA/MM) and the Justice and Equality Movement (JEM/Gibril), which are non-signatories of the Doha Document for Peace in Darfur, renewed their unilateral cessation of hostilities on 9 November, until 8 February 2019. On 6 December, SLM/MM and JEM/Gibril signed a pre-negotiation agreement with the Government, supported by Unamid. Meanwhile, the implementation of the Doha Document itself remained slow and beset with challenges.”

Guterres laments that “clashes between the Sudanese Armed Forces and SLA/AW continued to occur in central, western and southern Jebel Marra.”

He also highlights that “although no major intercommunal clashes occurred during the reporting period, there were two incidents of violence, resulting in three fatalities, compared with six incidents and 18 fatalities in the previous reporting period.

“Security improvements had a positive impact on the humanitarian situation overall, although the clashes in the Jebel Marra area resulted in additional displacement and the suspension of humanitarian missions to several villages in north, central and west Jebel Marra.”

Guterres says that the military component of Unamid conducted a total of 9,231 patrols, of which 2,667 were for the protection of civilians, including 1,905 visits to villages and 860 visits to internally displaced persons camps. Protection of Unamid personnel and equipment patrols totalled 6,321. Unamid police personnel also conducted 1,481 patrols, including 450 confidence-building patrols to internally displaced persons camps, 177 firewood and grass collection escorts, 114 market escorts, 463 patrols to villages, 222 patrols to towns, 34 patrols to areas of return and 21 patrols along migration routes, with a particular focus on women and children engaged in livelihood activities outside of their camps. Formed police units also provided 41 humanitarian escorts to the camps for internally displaced persons in Kalma, Dereige, Bileil and Otash, South Darfur. 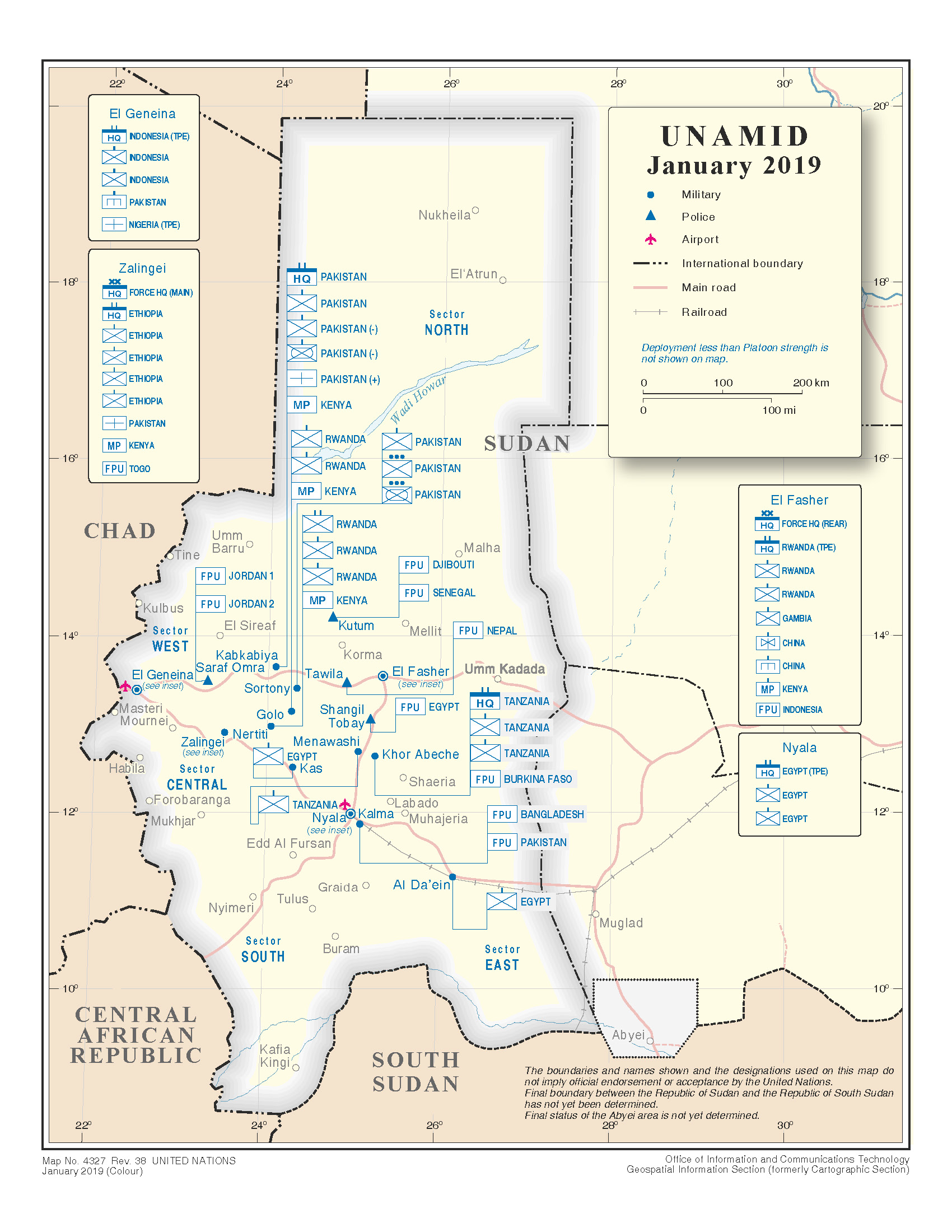 In accordance with the plan and timetable to reduce the military strength of Unamid from 8,735 to 5,470 by 31 December 2018, the repatriation of 190 Egyptian troops, 800 Ethiopian troops, 475 Indonesian troops, 310 Bangladeshi troops, 74 Pakistani troops, 25 Kenyan military police, 150 Tanzanian troops and 499 Rwandan troops has been completed. Five team sites have been closed and three others have been handed over to the mission’s formed police units. The redeployment of the former police units also continued to the team sites in areas from which the military personnel have withdrawn, as follows: the Egyptian units to Shangil Tobaya; Burkina Faso units to Khor Abeche; Nepalese units to Tawila, Jordanian units to Saraf Omra, and Senegalese and Djibouti units to Kutum. The number of individual police officers has also been reduced from 800 to 760. In the areas from which the military component of Unamid has withdrawn, internally displaced persons have raised concerns regarding the decrease in security and livelihood escorts. Unamid intends to scale up its rule of law and livelihood-related services to address those issues.

UN Secretary-General calls for ‘calm and restraint’ in Sudan