Newspaper editors in Sudan have been obliged to fill-in forms for the security apparatus which include details such as tribe, skin colour, and political affiliation. Journalists have denounced the forms: “This has bad connotations.”

The security service (NISS) has demanded that newspaper editors fill in a form of personal data and information including tribe, skin colour, military activity, a sketch of their houses and the closest methods of access to them, as of Sunday.

Journalist Ashraf Ibrahim, editor-in-chief of El Jareeda newspaper, said in an interview with Radio Dabanga: “What is strange in the form is mentioning the name of the tribe, which was not required in previous forms submitted by the security service to the journalists.”

Ibrahim was surprised at being asked about the skin colour. “I do not know why this form was designed in this way. This information has bad connotations.”

The form includes a question about the political colour of his partner, which was also not in the previous form. The new questions added to the form make it difficult to predict what the security apparatus wants with this information, Ibrahim concluded.

The form – which is not new in Sudan – demands information about editors' tribes, political affiliation, and access to their homes

Iman Osman, the editor-in-chief of El Midan newspaper (the mouthpiece of the Communist Party of Sudan), has described the newspaper editors' form as “repressive”. “This means that the press is more restricted and this could be used against them one day.”

She told Radio Dabanga that the redistribution of the form – which is not new in Sudan – coupled with the signature of journalists on Media Charter of Honour on November 1 “confirm that this regime will not change its attitude towards the press and its restriction”.

The security form comes one and a half week after newspaper editors-in-chief signed the Media Charter of Honour at the request of the NISS. The charter stipulates that no material or news about the Sudanese regular forces is to be published without indication of a spokesman. 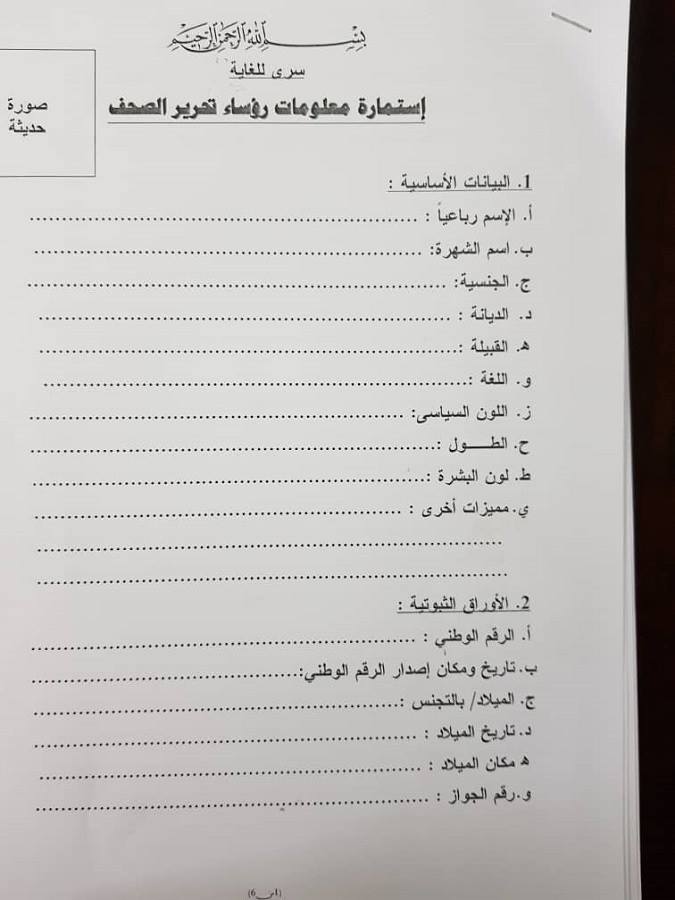 The form continues with questions about relatives and friends, their political orientation, and 'personalities and events that had an impact on the journalist'.

On the last page of the form, the editor is asked for a sketch of their houses and the closest roads that have access to them.

The Journalists Association for Human Rights (JAHR) has condemned the security apparatus’ distribution of the security form. Faisal El Bagir, the network's general coordinator, said in an interview with Radio Dabanga: “The security apparatus is not entitled to know your tribe, your friends, your wife, your political colour or the colour of your vehicle.”

He called on Sudanese journalists to resist the security step and not to fill out the form, saying that should the security services want information, it can access it through the civil registry.

“Sudan's measures [the security form and media charter, RD] are moving towards more violations, repression, and a police state – which is going to get worse than it is now.

The signing of the recent media charter recalls the charter from 2009, which was also signed by newspaper editors-in-chief at the time. The NISS used it as a pretext to conduct censorship prior to publication and confiscate newspapers. Originally, the NISS did not have the authority to interfere in the content of Sudanese newspapers. For years Sudan has been ranked at the bottom of the World Press Freedom Index by Reporters Without Borders.

Media Charter ‘no solution to problems of Sudan press’