Lecturers protest in Omdurman on Tuesday

The demonstrations and sit-ins called for by the Sudanese Professionals Association and other signatories to the Declaration of Freedom and Change continued across the country on Tuesday.

Graduates of the University of Khartoum carried out a protest near the main downtown campus chanting slogans of the revolution, which the troops attacked with batons and fired tear gas to disperse the demonstrators.

El Mustagbal University graduates also carried out a protest vigil in front of the university’s headquarters where the protesters carried banners demanding the overthrow of the regime.

On Tuesday, the silent vigil organised by lawyers before the Supreme Court in the centre of Khartoum turned into a massive demonstration after the security forces confronted them with tear gas and batons.

Witnesses said that lawyers walked around the areas adjacent to the Supreme Court and chanted slogans calling for the overthrow of the regime and the punishment of the killers of the demonstrators.

In Wad Nubawi in Omdurman demonstrators blocked El Doma street. They shouted slogans such as “We are all Ahmed [El Kheir, tortured to death by security agents last week]”, “The killing of a teacher is the killing of a nation”, “Just fall that’s all”, in addition to condemning the killing of the demonstrators, the corruption and the sale of the port.

In addition, the districts of Jabra, El Sahafa and Burri saw demonstrations demanding the overthrow of the regime.

Lecturers of Omdurman El Ahliya University, and the teachers working for the Kibeida International schools, held a sit-in demanding the step-down of Al Bashir and the fall of the regime.

The lecturers of Omdurman El Ahliya University held in the vigil they organised at the university campus signs of “Just fall that’s all”, “Freedom, peace, justice” and “Revolt is the people’s choice”.

Hundreds of members of El Gezira and El Managil Agricultural Scheme carried out a demonstration at El Ogda El Magharba village, carrying the flag of Sudan and demanding “freedom, dignity and the overthrow of the regime”.

All the pharmacies in Khashm El Girba of Kassala state were closed in response to a call by the Sudanese Professionals Association to strike.

The Central Pharmacists Committee described the strike as successful, pointing out that many pharmacies in the capital, Khartoum and the states, responded to the call to strike.

On Tuesday, doctors carried out 13 protest vigils in Khartoum and four other states in front of and inside hospitals, demanding that Al Bashir and his regime step down without any condition. 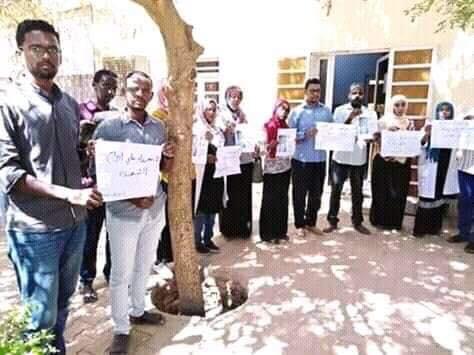 Doctors in Khartoum, El Managil and El Hasahisa in El Gezira, El Geneina in West Darfur, Singa in Sennar, and in Kassala, carried banners demanding the regime’s departure, condemning the killing of protesters with live bullets and assassinating them under torture.

The banners read “killing of a teacher killing a nation, stop the killing of doctors, teachers and demonstrators”.

The doctors chanted the national anthem and condemned the killing of peaceful protesters and assassinating citizens under torture.

Witnesses said Dr Hasan Bahari, the director of Ibrahim Malik Hospital in Khartoum, took the banners off the doctors and forced them out of the hospital’s campus. 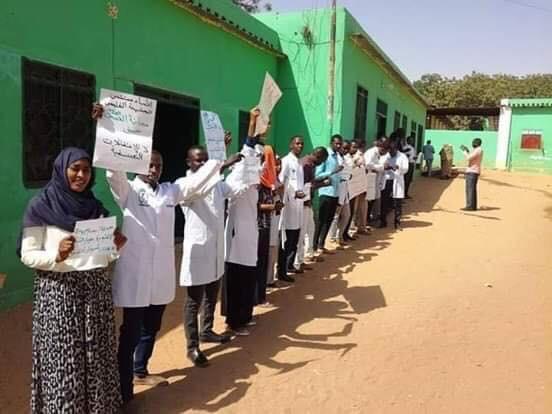