The defence attorneys of Noura Hussein, a 19-year-old Sudanese woman sentenced to hang for killing her husband after he allegedly raped her, were prevented by authorities from holding a press conference in Omdurman on Tuesday.

Sources told Radio Dabanga that the head of the defence team, lawyer Adel Mohamed Imam, notified the Omdurman police that a press conference would be held at 3 pm on Tuesday, and asked for the police to secure the conference.

However, the National Security and Intelligence Service (NISS) banned the defence from holding a press conference under the pretext of not being authorised by the security services.

Legal and press bodies attributed the banning of the press conference to the broad international rejection of the ruling issued against Hussein and the escalating pressure by civil society organisations.

This week, the European Union Heads of Mission and the Norwegian and Swiss ambassadors to Sudan expressed their concern over Hussein’s conviction, stating their “firm opposition” to the death penalty: “whatever the place and circumstances”. 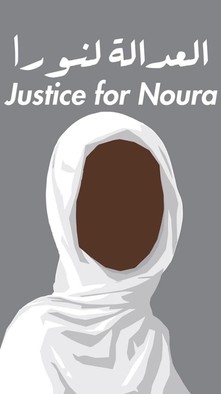 The Sudanese No to Suppression of Women Initiative has launched a campaign against the ruling. Internationally, the case of Noura Hussein has raised attention to the issues of forced marriage and marital rape in Sudan. The legal age of marriage is 10 and marital rape goes unpunished.

With the hashtag #JusticeForNoura and #SaveNoura many rights activists have expressed their condemnation of the unjust punishment. Amnesty International's Seif Magango told CNN that “The death penalty is the ultimate cruel, inhuman and degrading punishment and to apply it to a rape victim only highlights the failure of the Sudanese authorities to acknowledge the violence she endured“.