Ousted Sudanese president Omar Al Bashir is transferred from Kober prison to the office of the Public Prosecutor to hear the charges against him (Photo: SUNA)

Sudan’s ousted president Omar Al Bashir has met with Public Prosecutors in the Sudanese capital of Khartoum, to hear charges that will be brought against him in a trial scheduled to begin next week.

The official Sudan News Agency (SUNA) reports that the Prosecution for Combating Corruption has directed charges against the deposed president Omar Al Bashir for violations of foreign currency laws, illegal wealth, violation of the Emergency Order, and possession of Sudanese cash exceeding the maximum amount allowed.

The charges were directed in personal presence of the deposed president and representatives of the defence, including Ahmed Tahir, Mohamed Amin and Hashim Jaali.

An official source at the Public Prosecution said in a statement to SUNA that the ousted president was informed about his right to appeal against the charges within one week to the supreme prosecutor. Pictures show Al Bashir, clothed in traditional Sudanese garb, being transferred by car from Kober prison – which his regime made notorious – in Khartoum North, to the offices of the Attorney General.

The Attorney-General announced on Saturday via SUNA that the trial of Al Bashir will be held next week.

He said in a press conference in the public prosecutor’s office in Khartoum that the investigation in the case had been completed, the charge has been prepared, and the suit would be brought before trial after the legal period of seven days.

On Thursday, the Public Prosecution announced completion of all the investigations in the criminal case filed against Al Bashir.

Al Bashir, who was deposed by a military coup on April 11 has been indicted by the International Criminal Court for war crimes and genocide in Darfur, however the ruling Transitional Military Council (TMC) have opted to try him in Sudan. 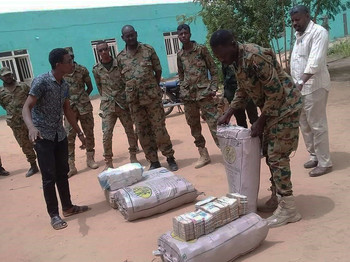 On April 18, Sudanese authorities seized a substantial amount of cash during a search of deposed Al Bashir’s residence in Khartoum, including $351 million, €6,7 million, £5.2 million, and SDG 5 billion ($105 million).

On April 25, even more money was reportedly retrieved from accounts in Al Bashir’s name.

All the cash has reportedly been safely deposited in the treasury of the Bank of Sudan.