Darfuri student Asim Omar will have an operation on his ear on Wednesday. His hearing was damaged during a beating-up at the Kober Prison in Khartoum North three weeks ago.

Omar, a member of the Independent Student Congress Party (affiliated to the opposition Sudanese Congress Party, SCP), has allegedly been tortured in prison several times since he was detained in early May 2016.

The student was detained after clashes had erupted between students at the University of Khartoum the previous month. Riot police intervened. During the chaos that followed, a policeman was killed.

After having been held incommunicado for months and reportedly ill-treated, Omar was charged with murdering a policeman. He was found guilty and sentenced to death in August 2017. The ruling prompted hundreds of fellow students and SCP members to demonstrate near the court against the “unfair trial”. In December, the Court of Appeal in Khartoum upheld the death sentence.

In January, the student started a hunger strike in the Kober prison in Khartoum to protest the prison administration’s decision to continuously shackle him.

Amnesty International, Omar’s lawyers and the SCP reported earlier this month that Omar was seriously beaten-up by guards at Kober Prison in Khartoum North on October 3 – just days before he was due in court for the first hearing of his re-trial.

“Asim Omar was repeatedly beaten with blunt instruments and whipped across his chest until he fainted. He was unable to appear in court because of his injuries, prompting the court to order his hospitalisation,” Amnesty International quoted Omar’s lawyers in a report on October 11.

Wifag Gurashi, a leading member of the Independent Student Congress Party, recently visited Omar in Kober Prison again, and told Radio Dabanga that he suffers from “an injury to his right eye, a kind of paralysis of the facial muscles, loss of hearing in one of his ears, and a loss of balance, in addition to injuries on his entire body after he was severely beaten-up by police guards in his cell.

She said that Omar’s injuries have been ignored. “He has not seen a doctor in time, which aggravated his health condition.”

Gurashi holds the authorities responsible for the consequences. “Hopefully, the operation on Wednesday will restore his hearing,” she said. 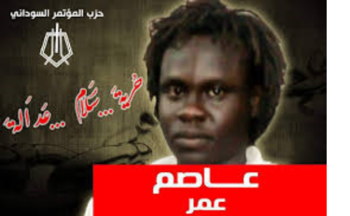 There will a court hearing on Tuesday to resume Omar's re-trial after two earlier sessions were postponed, the student activist further reported.

She added that the defence team has lodged a complaint against the Ministry of Interior Affairs, the prison police, and the persons who tortured Omar in early October.

The team will continue its proceedings upon the completion of the medical report, which has been delayed by the authorities on purpose according to Gurashi.

“The continuation of Asim’s unfair detention for more than two years is a flagrant violation of justice,” she said, and demanded “all human rights and humanitarian organisations to stand with Omar and express their solidarity with him”.

The SCP has always claimed that the charges were “fabricated”.