Over the past week, Ambassador Siddiq has tweeted several comments criticising the violent dispersal by Sudanese militia and other forces of the sit-in in front of the General Command of the Sudanese army in Khartoum on Monday June 3.

Siddiq also tweeted his concern about the deportation of the SPLM-N goodwill delegation to Khartoum and the reported killing of 19 children in Sudan since June 3.

In a statement via the official Sudan News Agency (SUNA) on Wednesday, the ministry summoned him “to express Sudan’s concerns and reservations about Mr Irfan’s statements and his unbalanced stance towards the current developments and events in the country,” the Foreign Ministry said.

The Ministry referred to “Irfan’s frequent tweets” saying they are “contrary to established diplomatic norms and the principle of sovereign equality of states in international law”.

The Sudanese officials complained that in his posts “the British ambassador disregards the circumstances of the bloody raid on the peaceful protest site and the TMC’s readiness to negotiate with the opposition”.

British ambassador Irfan Siddiq's tweet regarding the violence in Sudan 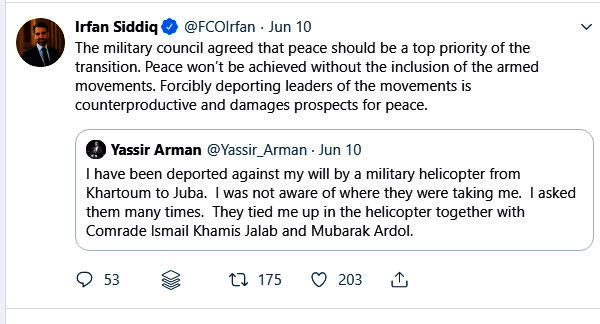 US appoints Donald Booth as Special Envoy to Sudan