Nuba women in Yida camp call for the resumption of aid, July 14 (RD)

Nuba refugees in the South Sudanese Yida camp deplore the increase in sexual assaults in the camp.

One of the refugees told Radio Dabanga that in particular girls are raped. “It mostly happens when they leave the camp to work on farms or to collect firewood.”

The number of rapes has risen recently. “The schools are closed at the moment, so the students are staying at home,” she said. "As we lack food since humanitarian aid stopped on September 14 last year, many girls leave the camp to search for work in the markets and on the farms, where they are subjected to rape.”

The source called on the UN Refugee Agency (UNHCR) and other organisations to provide the necessary protection for the girls and women in the camp.

On Monday July 13, women refugees staged a protest in front of the UNHCR office in the camp, calling for the resumption of humanitarian aid.

Yida is located in Unity state, 12 km from the border with Sudan. In 2011, before the civil war broke out again in South Kordofan’s Nuba Mountains, the area hosted about 20,000 refugees. By June 2012, it had increased to 50.000 refugees. 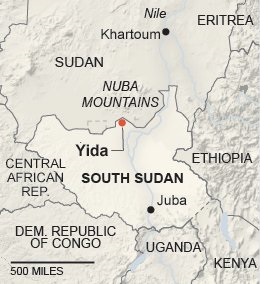 The place has never been officially recognised as a refugee camp. Therefore, UNHCR and partners started the relocation of the about 70,000 refugees from the overpopulated site in June 2016. The people were requested to go or transported to the camps in Pamir and Ajuong Thok.

Several refugees chose to stay in Yida. They were cultivating their own crops to supplement the food aid given by agencies. Yet, the aid was suspended and food became scarce because of the lack of rains that year.

In early 2017, tens of thousands of refugees left Yiday because of hunger. Many of them sought refuge in Pamir camp, others returned to Sudan. By mid-August, more than 27,500 refugees had returned from South Sudan to the Nuba Mountains.

Man ‘killed for being Nuba’ in Sudan’s South Kordofan