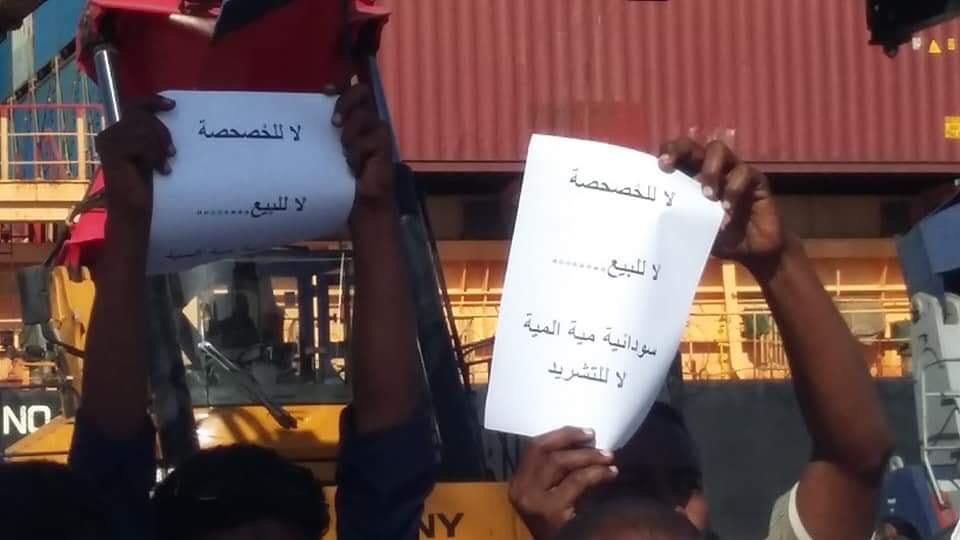 Opponents of the privatisation of the terminals in Red Sea state capital Port Sudan will form a committee to look into the agreement between the Ministry of Transport and the Philippine company that manages the port.

The Committee Against Privatisation said in a statement that the government’s decision to grant the management and operational contract of the largest port in the country to a company “whose technical and financial capabilities are questionable” as “catastrophic”.

The committee will prepare its observations, reservations and opinion on the agreement and is ready to “sit down with any official body to discuss our substantive justification for the rejection of the agreement”.

The committee, similar to the demands earlier expressed by port workers who staged a large strike against the agreement on January 28, expressed the desire of the people to “modernise and develop the port with its own capabilities and by its people”.

They fear that the Philippine company International Container Terminal Services Inc (ICTSI), which won the bid to operate the southern cargo port of the harbour, to “absorb about 1,000 workers out of a total of 6,500 registered workers”.

ICTSI was already granted management rights of the container terminal at the southern port for four years. Opponents of the privatisation explained that many workers oppose the new contract because ICTSI has been operating there in previous years without making any developments.

The complexity of the issue is also caused by the fact that a number of workers are in temporary employment or are loading and unloading workers. The latter is estimated to be more than 30,000 people who work on a temporary and cooperative basis called the ‘Kalat’ system, according to an earlier report by the Sudan Democracy First Group (SDFG).

In addition, the services that the port previously provided to port workers, including health centres and schools, are feared to be stopped.

Omar Farajallah, Undersecretary of the Ministry of Finance, announced that: “In the first seven years, the company will pay a fixed fee of one million Euros to the government.”

Farajallah told the official Sudan News Agency that ICTSI would do so under the contract signed with the government. The selection of the company to operate the port came after bids from international companies.

He explained about the provision of 530 million Euros as a bidder pays 410 million Euros in advance, the remaining to be collected within four years, provided that the Sea Ports Corporation receives 14 percent of the total output without the government bearing any losses.