Massed Friday prayers at the sit-in in Khartoum

During Friday prayers at the sit-in area in front of the General Command of the army in Khartoum, a leading imam has called on the leaders of the former regime to be brave, and face fair, urgent, and public trials. He also demanded that the maximum penalties be imposed on those who committed murder and abuse in the face of peaceful demonstrations.

In his Friday sermon at the sit-in, Dr Adam El Shein, the Imam of El Rahma Mosque in El Haj Yousef, called on the military junta to expedite the handover of power to a civilian government, indicating that the Sudanese people have experienced military rule for 30 years and found only injustice and corruption. He described “the talk of the remnants of the regime about the Sharia (Islamic law)” as “another corrupt bid”.

After Friday prayers, thousands of protesters marched in front of the General Command, demanding that the Transitional Military Council hand power to a civilian leadership.

The European Union mission in Sudan organised an iftar ceremony (breaking the Ramadan fast) at the sit-in in front of the General Command in Khartoum on Thursday.

In a statement the mission said it had decided to postpone its official annual celebration because of the holy month of Ramadan, and replaced it with the iftar, which was attended by the head of the mission, Ambassador Jean-Michel Dumond and staff.

He said that the aim of organising iftar is to communicate with the Sudanese, especially the youth in their quest to transfer power to a civilian transitional authority.

“I have been honoured to meet many young people from all over the Sudan who are here in search of justice, freedom and peace. It is a big reminder of the power of the human spirit and the desire for freedom, human rights and democracy. The European Union will continue to support those values in Sudan” said Ambassador Dumond at the ceremony. 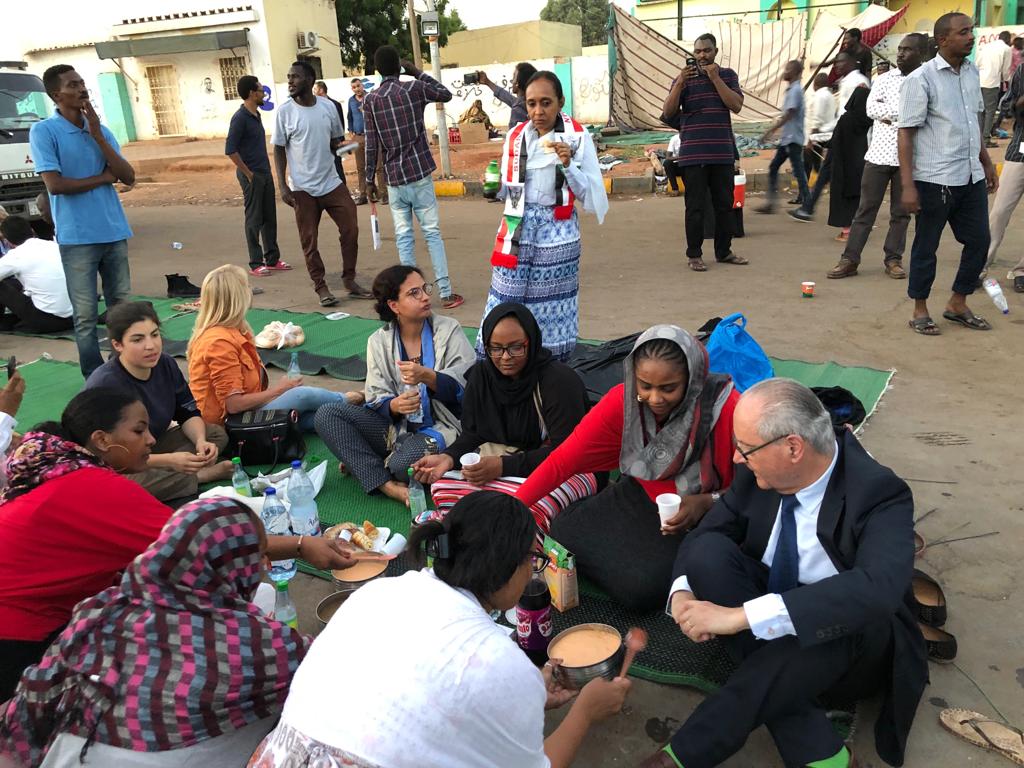 EU Ambassador Jean-Michel Dumond and staff join an iftar ceremony (breaking the Ramadan fast)
at the sit-in in front of the General Command in Khartoum on Thursday (Photo: EU)

Imam: ‘Bring leaders of Al Bashir regime to trial as lesson to others'