Fears of economic collapse as Sudan inflation continues to climb

The Grand Market of El Fasher, closed after repeated burglaries, May 2015 (RD)

Following new increases in the prices of food and other basic consumer goods in Sudan last week, economic analysts are warning of an imminent economic collapse.

While the value of the Sudanese currency continues to fall, the country’s Central Bureau of Statistics (CBoS) reported last week that the inflation rate in June rose to 63,86 per cent.

The US Dollar rose two Pounds within ten days on the parallel forex market in Khartoum. On Thursday, the greenback sold for 46 Sudanese Pounds, up from 44 Pounds on July 11.

Economic analyst Abdelhadi Ibrahim has warned of the consequences of Khartoum’s financial policies. “The economic collapse will most probably be accompanied by a breakdown of the remaining security structures and to social disintegration,” he told Radio Dabanga.

He attributed the soaring inflation and the continuing fall of the Sudanese Pound rates to “the over-borrowing from the banks, the printing of large amounts of extra bank notes, the increased production costs and import fees, and the lack of exports”.

Ibrahim called on the government to recognise the failure of its economic policies and develop an emergency plan to finance production projects in order to avoid the collapse of the country - which will entail a serious food crisis as well.

In June, Saudi Arabia allegedly promised Khartoum to support an economic development programme over the next five years.

On Thursday, the Ministry of Finance reported an acute shortage of foreign currencies, causing the rise of the forex rates at the parallel market.

State Minister of Finance Tarig Shalabi told the press in Khartoum that the ministry would address the crisis with a number of measures including new cuts in the import of so-called non-essential goods.

He said that the government expenditure should be curtailed, and exports increased.

“The economic collapse will most probably be accompanied by a breakdown of the remaining security structures and to social disintegration.”  - Economic analyst Abdelhadi Ibrahim

According to economist Hamid Eltigani, professor at the American University in Cairo, the rise of the exchange rate can be attributed to the increased demand.

“The Dollar is no longer a means of exchange but a means of saving money,” he said last week. He predicted a Dollar rate of SDG 100 by the end of this year.

In January, the director of the Troubled Currencies Program at Johns Hopkins University Steve Hanke said Sudan’s inflation rate jumped to a record high of 122 per cent, “the second highest inflation rate in the world after Venezuela”.

If high inflation persists, it can have a major effect on the econometric-social structure of a country. It tends to create a two-class system, eliminating the middle-class. Inflation can occur when a country prints too much of its currency and it loses value relative to other currencies.

Earlier this month, former banker Ismail Mohamed criticised the measures taken by the government to combat the crisis: “While the economy needs stimulating measures so it can start growing, they are using deflationary measures like restricting borrowing from banks and reducing the liquidity – which will deepen the recession even further”. 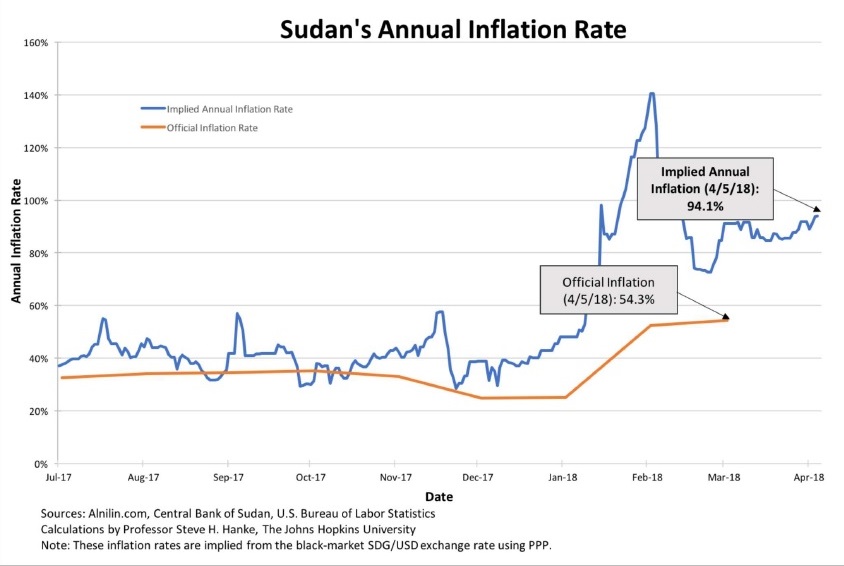 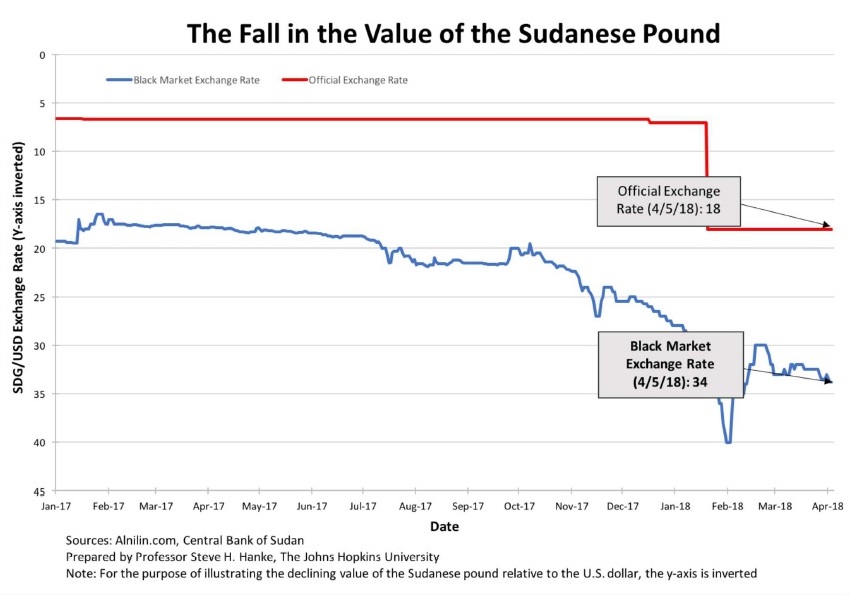 New, reduced cabinet to be announced within a day