Addressing a land conference launched in Khartoum on Sunday, UN Resident Coordinator in Sudan, Marta Ruedas, called for support to the land administration in Darfur in order to reach peaceful coexistence between the various communities in the region.

The UN official further pointed to the importance of establishing a steering committee and information centres to settle land disputes and demarcate pastoral routes in Darfur.

The Sudanese Ministry of Environment, Natural Resources and Physical Development and the Darfur Land Commission, in collaboration with the UN Development Programme (UNDP), UN-Habitat, the UN Food and Agriculture Organization (FAO) and the Global Land Tool Network (GLTN) organised the two-day Land Conference – Challenges and Opportunities, attended by donors and other stakeholders, including the Qatari ambassador to Sudan and representatives of Darfuri pastoralists and farmers.

This conference marks the first step towards improving land governance and land management in Sudan [..] and to develop a common understanding and vision on key land governance themes, UNDP said in a press statement today.

“This conference has brought Darfuris’ concerns forward but this is still the beginning and there is still more to accomplish.”  - Qatari Ambassador Rashid Bin Abdelrahman Al Neimi

Dr Wael El Ashhab, UN-Habitat Director in Sudan, explained that the aim of the conference is to share knowledge, experiences, challenges and solutions in terms of land governance and commitment to the necessary procedures.

He called the conference “timely”, and said that “the security situation continues to improve in Darfur which requires fast responses in terms of housing and services, rapid urbanization, competition over rural land by farmers and pastoralists, large scale land-based investments, and others.”

Aboud Jabir Saeed, the State Minister for Environment, Natural Resources and Urban Development, emphasised the necessity “to asses current land tenure laws and consider as well the views of the communities on the ground”. 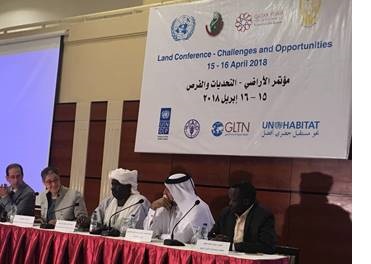 The Commissioner of the Darfur Land Commission, Mohamed Salih Mango, also pointed to the importance of including Darfuris in issues concerning land tenure and ownership.

“Previously, all land-related laws were formulated here in Khartoum. We are now discussing with the native administration in Darfur different approaches to reform land laws which will then seek the ratification of legislative councils in the five Darfur states,” he said.

The Qatari Ambassador, Rashid Bin Abdelrahman Al Neimi called for the endorsement of the outcomes of the conference. “This process is owned by all Darfuris who contributed and participated in the consultations represented by the Darfur native administration and Nomads and Farmers Unions. This conference has brought Darfuris’ concerns forward but this is still the beginning and there is still more to accomplish.”

Recommendations of the conference focused on “the imperative need to introduce reforms to the current land laws”. Other issues included “the need to boost awareness amongst communities on the rights of individuals in addition to the removal of current bottlenecks hindering proper registration of land”.

Participants further called for the need to address desertification and climate change’s impact on fertile land, and to replicate the successful experiences of smart partnership between the private and the public sectors in Darfur.

Another elderly man ‘tortured to death’ in South Darfur