More than 25,000 people commemorated yesterday the massacre of 79 people in Mukjar locality in Central Darfur on March 2, 2004, allegedly carried out by Ali Abdelrahman (aka Ali Kushayb*).

The demonstrators shouted slogans, holding Abdelrahman responsible for murder, their homelessness and theft.

The protesters marched from Freedom Square in Mukjar to the place where Abdelrahman allegedly carried out his first massacre, located 700 metres north of Mukjar. On March 2, 2004, Abdelrahman gathered 79 people from the area, including community leaders, imams, merchants, teachers, health care professionals and students. He executed them by opening fire at 12.00.

The demonstrators stood at the scene of the massacre yesterday for ten minutes, mourning the lives of their relatives.

The demonstrators then read the opening Sura from the Koran for the souls of the victims. They stated that justice is on its way, since Abdelrahman now is in custody in The Hague, the Netherlands, and will be tried by the International Criminal Court (ICC).

Abdelrahman, who was transferred to the Netherlands last week, was informed of the charges against him on Monday. On the basis of his individual criminal responsibility Abdelrahman will be tried on 53 counts of war crimes and crimes against humanity allegedly committed in Darfur.

The massacre was the start of other mass executions in Mukjar and Bindisi localities in Central Darfur, witnesses and survivors told Radio Dabanga. They hold Abdelrahman responsible for the killing of 1,033 people between March 2 and April 9, 2004.

They claim that the victims were buried in 43 mass graves. These graves have been found in several areas, including Mukjar, Narmi, Tandi, Sendu, Jalgasim and Kedum, where more than 100 people were buried collectively, and Turetka, where Abdelrahman executed 54 people.

They said that whenever possible the victims were registered by name, age and village. Many could not be registered properly of were never found. Whole families had been killed as well. 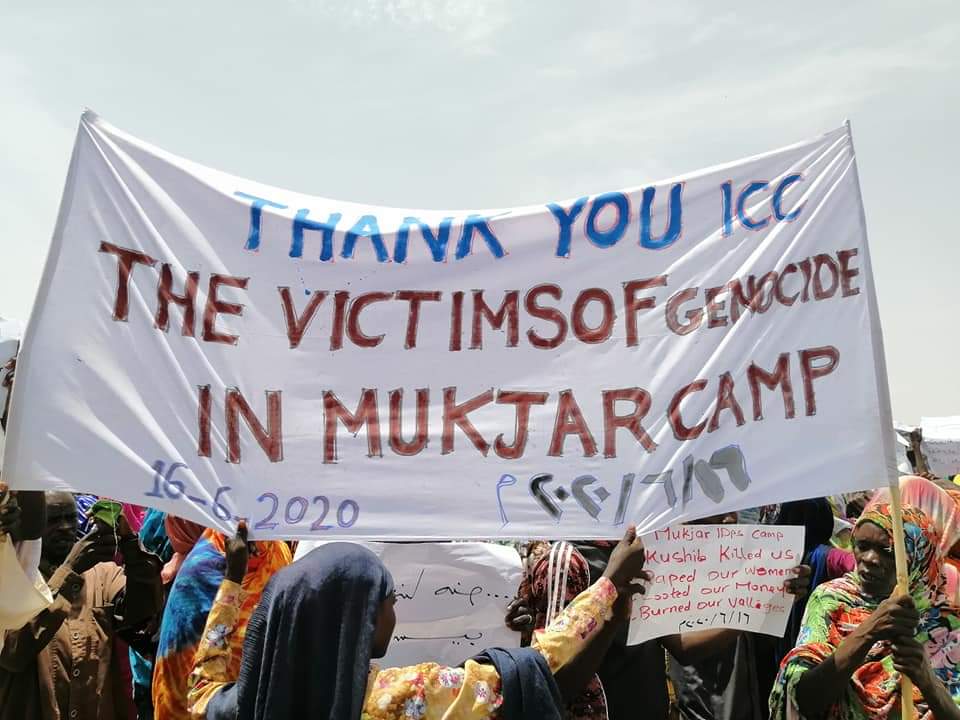 Displaced people living in Ardamata camp in El Geneina, capital of West Darfur, carried out a vigil yesterday to welcome the start of Abdelrahman’s trial at the International Criminal Court.

They demanded the most severe punishment for the perpetrators of genocide, crimes against humanity, and war crimes in Darfur.

They also demanded that the four others indicted by the International Criminal Court be extradited to The Hague, including ousted President Omar Al Bashir.

They emphasised that have been displaced more than 15 years ago.

*At his first appearance before the ICC on June 15, Ali Kushayb (as stated on the arrest warrants) insisted that he be referred to as Ali Abdelrahman. The judge provisionally ruled that the suspect will be referred to as such.

Sudan govt lauds arrest of Kushayb, will discuss extradition of other suspects