Second Vice-President Osman Kibir ordered state governors in Darfur and all other states to return any land of people who have been displaced by war and now willing to return, to their rightful owners by force.

At the conclusion of the Darfur States Conference of Displaced People in Nyala on Monday, Kibir called for the support to “any displaced person and refugee” in this regard. He also instructed the Darfur governors to carry out the so-called voluntary return of displaced people, or carry out their resettlement – all “in accordance with the wishes of the displaced without forcing anyone”.

Kibir stressed to continue the collection of illegally held weapons from all components of society, with no exception to anyone.

Osman Kibir was appointed as second vice-president in the new cabinet of President Omar Al Bashir in September.

'There is no liberated land'

El Faki affirmed his commitment and that of fellow governors to the Doha Document for Peace in Darfur (DDPD) which stipulates the return of displaced people to their home areas.

He added that they are committed to coordinate with organisations, UN agencies and the peacekeeping mission (Unamid) “for peace, stability and the exit of displaced people from aid relief to recovery and sustainable development”. Unamid has been withdrawing from the region, including from camps for displaced people, and has handed a number of positions over to police or regular forces. 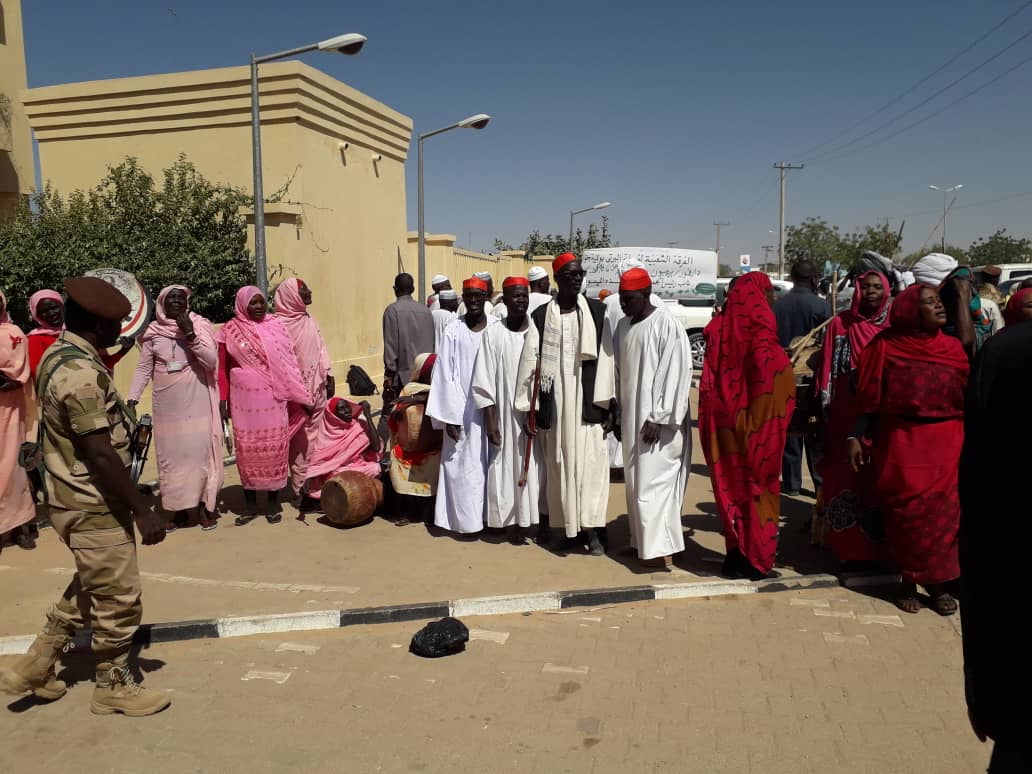 The team sites in Buram and Gireida, in Sector South are due to be closed before the end of December.

The head of the Unamid South Darfur sector was also present at the Darfur States Conference of Displaced People. Birhani Musgil Nika said: “The Conference and the success of the inter-school competition is evidence of progress in the peace process and stability in Darfur and South Darfur in particular.”

He confirmed Unamid's support for displaced people's efforts, continued dialogue and consultation in Darfur in order to achieve peace over the next two years.

Several associations of displaced people and refugees in Darfur have rejected the Darfur States Conference of Displaced People, which concluded yesterday. It brought together “over 200 displaced including women from across Darfur, recommended among others, restoring peace, stability, development and address the root causes of the conflict in the region” a Unamid statement reads today.

“Khartoum attempts to erase the impact of the displacement through the voluntary repatriation,” – Chairman Yagoub Furi

According to the chairman of the Darfur Displaced General Coordination, Yagoub Furi, they were not represented at the conference held in Nyala. “Those who took this step represent only themselves and have nothing to do with the displaced.”

Speaking to Radio Dabanga, Furi expressed his concern that the government attempts “to erase the impact of the displacement through the three-way plan of voluntary repatriation, camp re-planning and resettlement”.

He said that there should be no voluntary return unless it meets several conditions: “Including disarming all the Sudanese pro-government militias, expulsion of new settlers from the villages, trying the perpetrators of the conflict in Darfur – headed by the fugitive of the International Criminal Court (ICC) President Omar Al Bashir, as well as the provision of compensation to all those affected by the war in Darfur.”

In his statement he also called upon Unamid to request international envoys to continue field visits to investigate the humanitarian situation on the ground.

This week, the governor of Central Darfur offered three options for people: for those who want to integrate into their current city, they will be offered a certificate of ownership of a piece of land, of which there are 8,000-9,000 available. Secondly, for people to return to the displaced persons village of origin, and the final option is to move to a new area in Central Darfur, “all basic services and security provided”.