On Wednesday, the Sudanese security forces launched a large campaign of arrests among activists in Rabak, capital of White Nile state. They also opened roads linking the town to Khartoum and neighbouring towns, that had been blocked by protestors, by force.

He said no injuries were reported.

On Tuesday, security forces opened fire, killing at least four people and wounding 20 others, two of them were taken to Khartoum for treatment.

On Tuesday evening, the security forces tried to break up Port Sudan’s sit-in in front of the 101st infantry division without being able to do so while Port Sudan Airport workers continued civil disobedience.

Journalist Amin Sinada told Radio Dabanga that police vehicles broke into the barricades of the sit-in outside the old gate of the Red Sea University in order to break the sit-in, but the protestors held on to the sit-in, forcing the police to withdraw.

He reported that civil disobedience continued in Port Sudan and the airport to demand that the military junta to hand power over to civilian rule.

The protestors closed most of the main and branch roads in the market and a number of neighbourhoods using roadblocks and igniting file on tires.

On Saturday, massive marches were launched in El Obeid, capital of North Kordofan which the city has never witnessed before, against the transitional military junta demanding the handover of power to a civilian government.

Osman Hasan of the leadership of the Alliance for Freedom and Change (AFC) in El Obeid told Radio Dabanga, that the marches began from the eastern and western districts of the city and the main street streets and shouted against the military junta.

He pointed that the marches then went to the homes of the families of the martyrs in El Obeid where they raised the demands for which the martyrs died.

On Wednesday, Ed Damazin in the Blue Nile state witnessed a heavy deployment of the Rapid Support militias, causing great panic among the residents.

Dr Shiraz Ahmed of the leadership of the Sudanese Professional Association in Ed Damazin told Radio Dabanga that RSF are deployed in markets and main roads to hospitals.

She pointed out that the residents were beaten and harassed by RSF militiamen in the roads and markets, causing great panic among them.

Yesterday Singa in Sennar was relatively calm after it was subjected to gross violations by the RSF on Tuesday.

He pointed to Radio Dabanga that the residents in the market in Singa were subjected to a humiliating violation of human dignity by the RSF, which consisted of severe beatings with batons. Plastic wires and the firing of live ammunition in the centre of the city, in addition to looting of property and damaging goods without any justification. 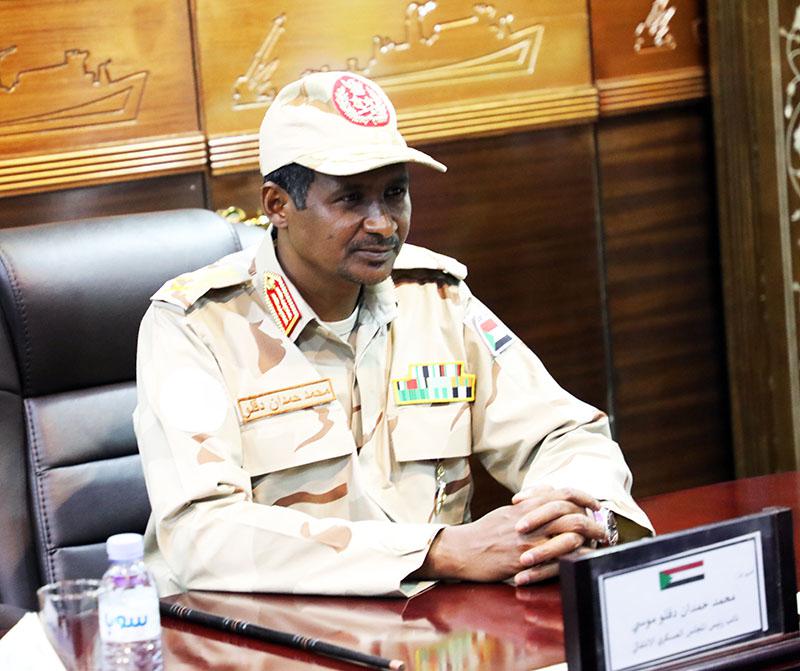 Lt Gen Mohamed Hamdan ‘Hemeti’, the deputy chairman of the Transitional Military Council and commander of the RSF (Photo: SUNA)

Hemeti: ‘Junta is seeking to impose the Rule of Law’

Lt Gen Mohamed Hamdan ‘Hemeti’, the deputy chairman of the Transitional Military Council and commander of the RSF, said that the junta is seeking to impose the Rule of Law.

He said in a speech on the occasion of Eid El Fitr in front of members of the RSF in Khartoum on Wednesday that there are organised gangs working to systematically target troops, pointing out that these gangs impersonate the members of the RSF and act to incite and assault and intimidate the Sudanese.

He said that “Sudan has emerged from the totalitarian regime after the removal of President Omar Al Bashir, as the country was about to become more totalitarian”.

Sit-ins broken up in Port Sudan and Wad Madani

Troika: Khartoum massacre has put peace in Sudan in jeopardy