Sudan’s largest paramilitary force has carried out nearly 100 attacks against towns, farms, and civilians in North Darfur and Jebel Marra since 2016. A number of these villages have been destroyed and have turned into ghost towns after residents fled the area, satellite images from before and after the attacks show.

Verifying reports of attacks on residential areas in Darfur has been difficult due to the remoteness of towns, the lack of footage and the scarcity of news reports from Sudan’s western region. Research and media non-profit Lighthouse Reports has analysed news reports and satellite imagery of villages that have reportedly witnessed large-scale attacks and arson at the hands of members of the Rapid Support Forces (RSF).

Attacks by the paramilitary RSF have led to numerous civilian deaths and displacement of people in Darfur, according to human rights organisations. The RSF have been formed by the janjaweed fighters that have terrorised the Darfur region for years since 2003. Then, and now, commanded by Lt Gen Mohamed Hamdan Daglo ‘Hemeti’. Hemeti has also become vice chairman of Sudan’s now leading Sovereign Council after protesters toppled 30-year dictator Omar Al Bashir in April 2019.

In Darfur, many of the people displaced by armed conflict and insecurity have sought refuge in camps or have fled abroad. According to the United Nations Refugee Agency (UNHCR), nearly two million people remain displaced in Darfur. They are scared or unable to return home because their home has been destroyed. This is particularly the case in North Darfur state and the mountains of East Jebel Marra that overlap the state’s southern border. 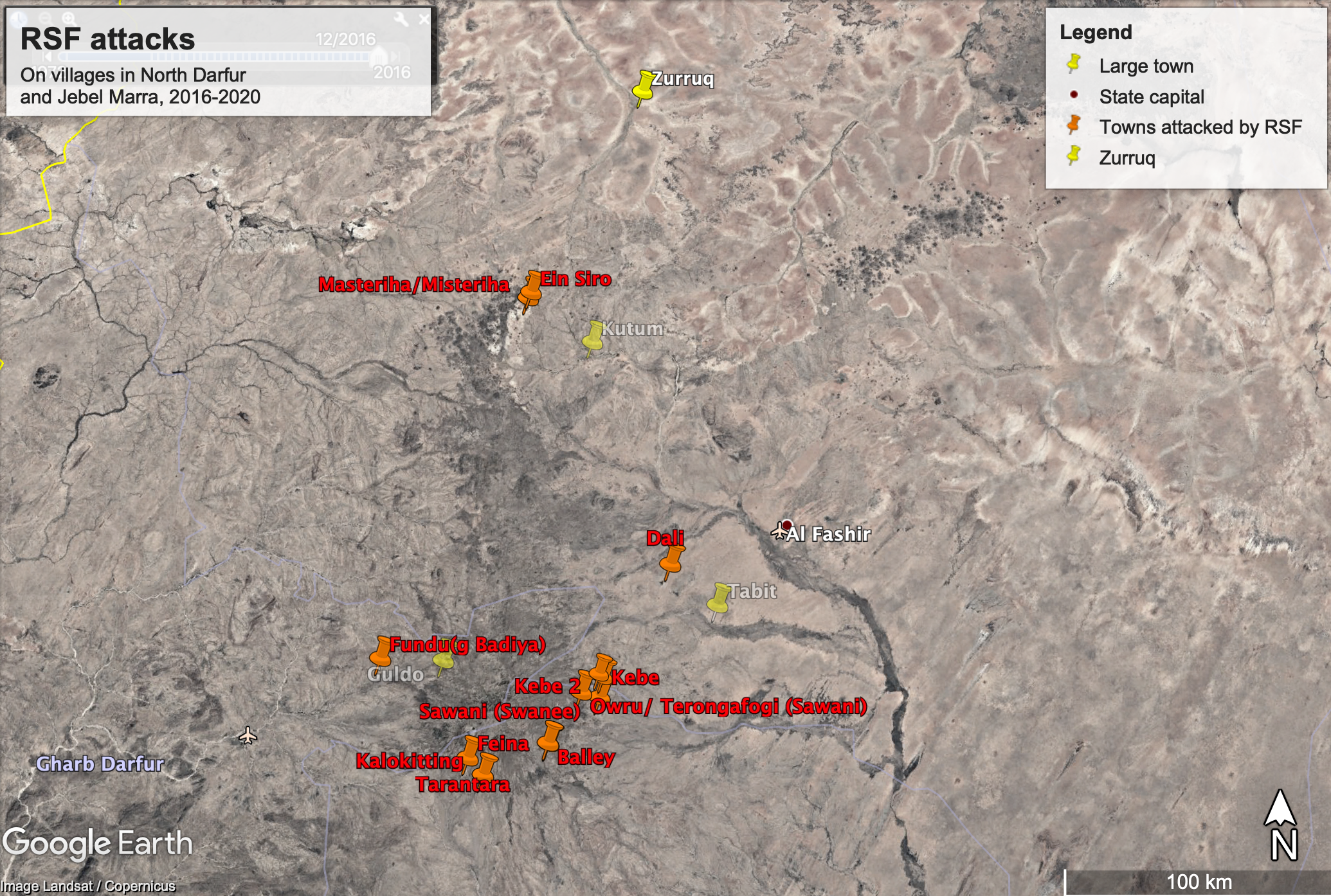 In North Darfur, returning residents and farmers have been attacked and denied access by militiamen including RSF that claim ownership of the land. In Jebel Marra, Amnesty International reported the destruction of at least 45 villages by Sudanese army and Rapid Support Forces between July 2018 and February 2019.

A news analysis of Radio Dabanga witness reports from North Darfur and East Jebel Marra showed that the RSF attacked towns, farms, and residents at least 93 times from 2016 until this year. Satellite images of ten of these attacks visually confirm the reported destruction of residential buildings and crop storages. Half of the villages are displayed below, including which towns have been abandoned following the attacks. Indicating that either residents were killed, or have sought refuge elsewhere, in one of Darfur’s many camps for displaced people.

Visual clues of damaged villages on the historical satellite images are blackened earth and vegetation, months later followed by houses and huts of which roofs and hedges have disappeared. An image of the location showing rubble and other remains indicates that no one has returned to live there afterwards.

This is seen in Kebe (13° 4’51.52”N, 24°41’58.65”E), on the border between North and South Darfur. According to a Radio Dabanga news report, four children and adults were killed in an attack on the village by militiamen with machine guns in cars and camels and horses. The attackers took dozens of cows, horses, sheep, and goats, and set fire to the houses. Kebe’s coordinates are.

Satellite images showed that houses, including roofs and fences, have disappeared between 2017 and 2019. Separately, a field at the periphery of the now abandoned town with small buildings or storages has been affected too.

Fleeing people told Radio Dabanga that two people were killed, and four others were wounded in Jebel Marra during clashes between the RSF and the rebel Sudan Liberation Movement led by Abdelwahid El Nur (SLM-AW). The Jebel Marra mountains are known to be holdouts of the armed movements. The fighting caused thousands of civilians in Jebel Marra to flee, witnesses reported several days later to the radio station.

People from neighbouring villages said that they heard shooting and explosions and saw smoke billowing above the areas of Tarantara and Kalokitting (12°45’27.7”N 24°17’33.8”E). Kalokitting already had many houses missing roofs prior to the attacks in May 2018, possibly caused by a large attack before January 2017. In early 2019, however, the majority of roofs have disappeared, and buildings look scorched.

At least 11 people lost their lives in a large-scale attack by the RSF on the border between North and South Darfur. Villages in the vicinity of Sawani (13°0’36.32”N, 24°41’12.43”E) were raided and torched. More than a hundred livestock animals were stolen according to residents. Villages in the area of Terongafogi and Owru, 10 kilometres north-east of Libei, were attacked as well, causing the people to flee to nearby valleys and mountain tops.

Sawani lies in an area with multiple crop warehouses and a place for livestock, which came under attack. The satellite images below by Arcgis Wayback Imagery have a high resolution and show the damages as recorded nearly a year after the reported attack. Coordinates:

In May 2017, the RSF carried out a large-scale attack in the area of Ein Siro in Kutum locality. Their attacks on the villages Ein Siro and Masteriha (also known as Misteriha 14°21’23.00”N, 24°25’45.00”E) resulted in the death of at least 12 civilians, houses raided and torched, and many people fleeing the area. The damage after the attack is visible on satellite images. Multiple roofs and houses have disappeared the next month. On satellite images from 2019, Masteriha seems to have remained unchanged and empty after the attack. Coordinates:

This village in Tawila locality (13°28’9.65”N, 24°31’10.20”E) was attacked and torched by RSF or as a witness calls them, “janjaweed” in March 2016. Hundreds of families were robbed of their belongings as their houses were set on fire. A villager speaking from a camp for displaced people in Tawila told Radio Dabanga that they were attacked by a large group of militiamen in vehicles, on horses and camels.

The first image shows that all houses have roofs. By February 2019, nearly all roofs have disappeared, indicating that residents have abandoned and not returned to the village following the attack. Coordinates:

Each year since the reactivation of the janjaweed fighters into the RSF in 2013, the militiamen have destroyed numbers of villages in North Darfur and Jebel Marra. Their violent raid campaigns in 2014 have continued. And particularly in North Darfur displaced people who attempt to return to their homes or farms have faced armed men, including RSF, armed herders and ethnic groups, who now claim ownership of the residential and agricultural areas.

Hemeti and his clan have developed the new town Zurrug here, on land contested by displaced communities, The Guardian reported this year. In order to keep the grounds of Zurrug, farmers who try to visit their farms in that area are harassed by the RSF. Meanwhile Hemeti continues to expand the real estate by building houses, markets, and water wells in the area. Schools are jerry-built from prefab structures that once stood in team sites of the UN-AU peacekeeping mission in Darfur, Unamid. Human Rights Watch has denounced the takeover of the Darfur mission’s bases by “these abusive paramilitary forces”.

Commander Hemeti is currently deputy chair of the Sovereign Council overseeing the transition in Sudan while holding leadership of his paramilitary force. In April this year, Council chairman Lt Gen Abdelfattah El Burhan said that the army and the tens of thousands of RSF troops will protect Sudan and the revolution. This is the same force that follows tactics of arson in villages and running out civilians in Darfur, leaving abandoned areas they can lay their claim on. While the influence of RSF commander Hemeti continues to grow in Sudan, Darfur’s ghost towns remain, and the land ownership issue is far from buried.

The remote sensing analysis was conducted after mapping over a hundred villages in North Darfur and (East) Jebel Marra. For this, (dated) lists of coordinates by Unamid (2013) and Darfur Damaged and Destroyed Villages (2010) were used. The images have been obtained from the public satellite imagery providers Google Earth Pro, ArcGis Living Atlas, Planet Explorer and Terraserver. The following elements in images were checked to determine whether a village had been torched or abandoned: scorched earth, disappeared buildings, disappeared roofs, disappeared trees, deteriorated or disappeared thatched hedges. The chance that these kinds of damage are due to other causes (such as domestic fires) than arson committed by RSF members was mitigated by only analysing images recorded as close as possible to the date of the reported attack. Depending on the satellite imagery provider some historical images that are time-wise closer to the date of the attack may have a lower resolution. In that case I have chosen to present the higher resolution images, which you can view more clearly. At times, the research was challenged by a lack of frequent recordings or low image resolution. The satellite imagery analysis therefore covers only a fraction of all Rapid Support Forces’ attacks in Darfur that have been reported by news outlets and humanitarian organisations.

Disclaimer: The views and opinions expressed in this article are those of the contributing author and do not necessarily reflect the position of Radio Dabanga.

The author Nouska du Saar is a journalist and fellow open-source intelligence (OSINT) researcher with the Netherlands based investigative bureau Lighthouse Reports. She is also a former Radio Dabanga editor. This investigation, presented exclusively to Radio Dabanga, was made possible with financial support from the Dutch Fund for In-depth Journalism (Fonds Bijzondere Journalistieke Projecten).