The UN-AU joint peacekeeping mission in Darfur (Unamid), has officially handed over its Community Policing Centre (CPC) in El Salam  Camp, South Darfur, and El Sereif Team Site in North Darfur to the government of Sudan.

The handovers occurred on October 4 and 8, and are in accordance with the United Nations Security Council Resolution 2429 (2018), which has called for the closing of 10 Team Sites across Darfur as part of the Mission’s reconfiguration process.

In a statement via its website today, the Mission says it intends to complete this task by the end of December 2018. The Team Sites earmarked for closure include Mukjar in Central Darfur; El Sereif, Um Baru and Korma in North Darfur; Masteri and Murnei in West Darfur; Shearia and Labado in East Darfur; Gireida and Buram in South Darfur.

The handover ceremony in South Darfur was attended by Humanitarian Aid Commission (HAC) representatives, leaders of the displaced of El Salam as well as Unamid staff.

Speaking at the ceremony, Unamid Sector South, Head of Office, Berhanemeskel Nega, stated that the handing over of Unamid CPC is in line with the Mission’s winging-down.

“This CPC serves more than 70,000 displaced in El Salam Camp. Sudanese Police and the state Humanitarian Aid Commission (HAC) in close collaboration with the displaced community, will now take over the responsibility of the CPC. Unamid is encouraging all stakeholders to work together to ensure the safety and security of the displaced to facilitate attainment of durable peace in the community,” Nega added. 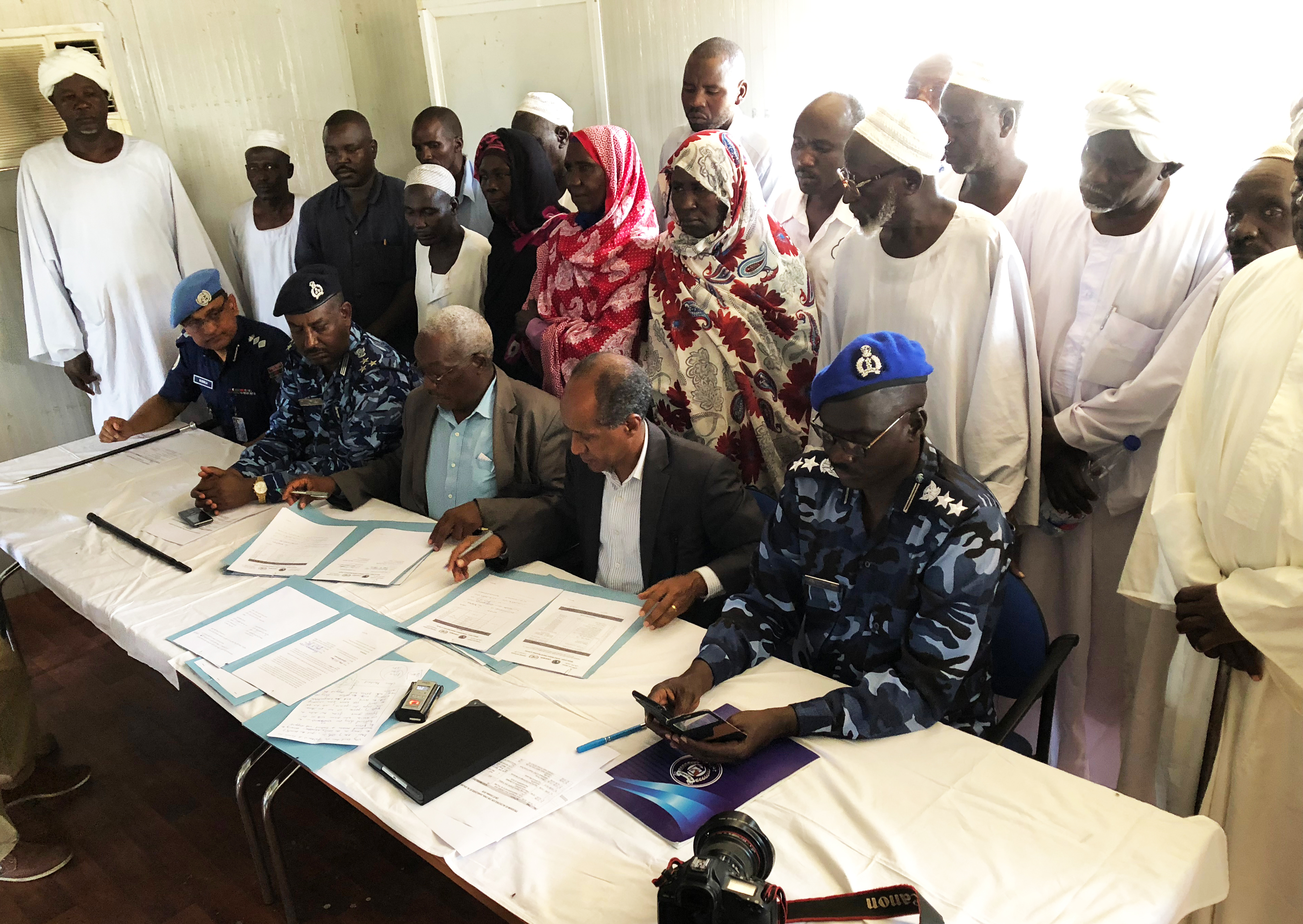 On October 8 2018, Unamid officially handed over the Community Policing Centre (CPC) in El Salam Camp
for the displaced Darfur, to the government of Sudan. Unamid Sector South Head of Office,
Berhanemeskel Nega (second right), represented the Mission in the ceremony (Photo: Mutaz Munafal/Unamid)

In his response, the South Darfur State Commissioner, Eissa Bassi, advised that the CPC at Al Salam Camp has, since its inception in 2004, provided security and community services to the displaced and will continue to do so in the future. “The [Sudan] government has agreed to utilize the CPC as a police station where government of Sudan Police, HAC and displaced leaders will work together take over responsibilities previously performed by Unamid peacekeepers, including the safekeeping of assets inside the CPC”, Bassi added.

At the handover of the El Sereif Team Site in North Darfur, Unamid Representative, Andrea Charles-Browne, emphasized that it was agreed with community leaders and local authorities that the Team Site premises will be used a technical school for youth and women, and for general recreational benefit of the community in the area. She added: “Unamid is appealing to all to maintain and develop the Camp for posterity.”

The Humanitarian Aid Commissioner in North Darfur, Ibrahim Ahmed Hamid, expressed the government of Sudan’s appreciation of the gesture a"nd rest assured that the premises will be utilised in the agreed manner for the benefit of the local community".

“In line with general UN practices in post-conflict regions, Unamid recommends that the government of Sudan transforms team sites and other locations handed to them, into education, health, security and recreational facilities accessible to the local communities as a way of contributing to the overall development of Darfur,” the Unamid statement concludes.

University of Zalingei to get Unamid’s Central Darfur HQ