The United Nations Emergency Relief Coordinator, Mark Lowcock, urged international partners to step up support to the humanitarian response to 7.1 million of Sudan’s most vulnerable people, and invest in the country’s social-economic development.

The appeal was made during a recent visit to the country between 12 and 14 May, where Lowcock, who is also United Nations Under-Secretary-General for Humanitarian Affairs, met with government officials and humanitarian partners, according to latest bi-weekly bulletin of the UN Office for the Coordination of Humanitarian Affairs (OCHA).

Lowcock stressed the complexity of Sudan’s humanitarian scenario: “Millions of people face serious and growing humanitarian needs. Many have suffered for the past 15 years, but we cannot let them slide back into a situation where they become completely dependent on humanitarian assistance,” said Lowcock, urging the donor community to support Sudan’s immediate, life-saving needs. He underlined the need to scale up longer-term development assistance to boost Sudan’s resilience, moving beyond recurrent cycles of emergency assistance.

During his two-day stay in the country, Lowcock also visited settlements for internally displaced persons (IDPs) in Murta and Kulba in South Kordofan, and verified in person the challenges to critical assistance delivery in an environment of tenuous peace. Welcoming the Government of Sudan’s efforts to improve humanitarian access to most locations in Sudan, Lowcock stressed the need for unfettered humanitarian access including those controlled by non-state armed groups. 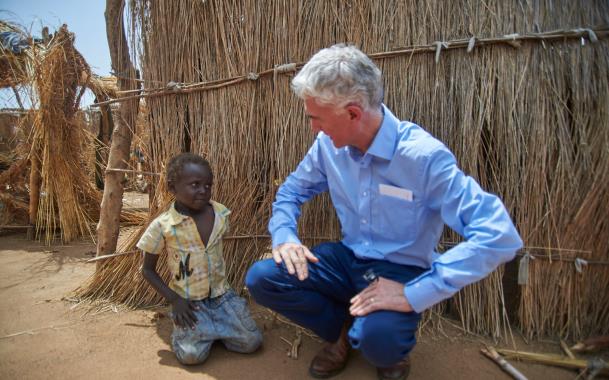 While unilateral ceasefires have improved the security situation across Darfur, South Kordofan and Blue Nile, skirmishes in recent weeks between armed groups in pockets of Darfur’s Jebel Marra region have caused a renewed wave of internal displacement.

“It is critical to strengthen social protection mechanisms for the most vulnerable, including returnees, IDPs and host communities,” said Lowcock. He expressed particular concern for women and children, and the need to protect them from sexual violence.

Lowcock also commended the generosity of the Government of Sudan and its people in hosting some 1.2 million refugees this year, including some 760,000 from South Sudan. He urged the donor community to provide more support to Sudan to help meet these costs.

Sudan’s humanitarian situation has become increasingly complex, since a recent food price increase has left millions of people unable to afford the price of the basic food basket. In addition, recent fuel shortages have affected the delivery of humanitarian assistance to vulnerable communities.

The United Nations-coordinated Sudan Humanitarian Response Plan for 2018 now appeals for US$1.4 billion. So far this year, donors have provided about $232 million, most towards food aid.

Key facts and figures on the current situation in Sudan

▪ Of at least 2 million IDPs, many have lived in camps for more than 12 years.

▪ $1.4 billion is urgently needed to provide humanitarian assistance to those in need, and to help people rebuild their lives.

▪ There are some 300,000 refugees from Sudan living in refugee camps in Chad. Voluntary repatriation started in March, and 20,000 refugees are anticipated to return to their places of origin in Darfur in 2018.

▪ During the past year, access has opened to people in need in new areas in Darfur’s Jebel Marra in Central Darfur, South Kordofan and Blue Nile states, for the first time in several years, requiring scaled up assistance.

Nationwide fuel shortages that started in March 2018 continue to impact humanitarian operations, including the delivery of relief, provision of basic services and the implementation of an urgent measles vaccination campaign necessary to minimize the immunity gap among the Sudanese population.

A high incidence of measles cases reported from 16 out of 18 states of the country highlights the need for urgent vaccination campaigns and strengthening of routine immunization across the country. Sudan’s Federal Ministry of Health (FMoH) confirmed 745 cases of measles between 1 January and 4 May 2018. Nearly half of these cases were reported from Red Sea state (338 cases), followed by River Nile (96), North Darfur (93), Gedaref (67), Kassala (65) and other states. In North Darfur, 41 cases were reported from Zamzam and Mellit camps among populations above 15 years old.

About 61 per cent of the confirmed measles cases registered in Sudan this year were not vaccinated against the disease. The World Health Organization (WHO) strongly recommends immediate implementation of the measles response plan including conducting nationwide mass vaccination campaigns, standard case management of cases, strengthening routine immunization, enhancing surveillance and community awareness to control the outbreak and prevent future occurrence.

The FMoH, supported by WHO and the UN Children’s Agency (UNICEF), are ready to implement the vaccination campaign, with vaccines and skilled health workers on standby.

According to WHO, measles is a highly contagious viral disease. It remains an important cause of death among young children globally, despite the availability of a safe and effective vaccine. Globally, measles deaths have decreased by 84 per cent in recent years and an estimated 7 million people were affected by measles in 2016.

The United Nations Refugee Agency (UNHCR) reported in its latest update on the South Sudanese refugee response that in White Nile State the fuel shortage has interrupted water treatment plant operations for refugee camps in White Nile State. Refugees at several camp locations are now drawing water directly from the White Nile River. UNHCR is working with local partners and authorities to secure emergency fuel supplies. In the meantime, water, sanitation and hygiene (WASH) partners have started distributing water purification tablets to refugee households and extending public information initiatives on the importance of boiling water to mitigate the risk of waterborne diseases. Household water filters are also being procured in anticipation of ongoing interruptions to clean water supply for refugees living in camps.

Some international and national NGOs—who have received funding from the Sudan Humanitarian Fund (SHF)—have reported that they will be unable to complete some projects on time. Many have been forced to delay activities due to lack of sufficient access to fuel, and – in some instances – limited access to cash to pay for the labour component of projects in the field.

According to the latest Global Information and Early Warning System (GIEWS) Food Price Monitoring and Analysis (FPMA) Bulletin, in the capital, Khartoum, prices of wheat increased in April by more than 10 per cent after a 20 per cent decline in March. Overall, cereal prices in April were more than twice year-on levels and at record or near-record highs after sharp increases in late 2017 and early 2018, following the removal of wheat subsidies in the 2018 budget (FPMA Food Policies) and the strong depreciation of the local currency. The removal of subsidies of electricity, coupled with limited availability of fuel across the country, and resulting higher prices of transport contributed to the increase in food prices. Localized production shortfalls affecting the 2017 harvest provided further contributed to the increase in cereal prices, the FPMA Bulletin reported.

The World Food Programme (WFP) said in its most recent Monthly Market Update for Sudan that the national average retail price of sorghum increased by 7.9 per cent from March to April 2018. Prices were 131 per cent higher compared to April 2017, and 244 per cent higher than the five-year average, according to WFP. The increase in sorghum prices is attributed to the diminishing supply from the last harvest (2017/18) and the approaching lean season; concerns around the availability and affordability of agricultural inputs for the 2018/19 season; the high cost of production; the higher price of wheat; and the devaluation of the Sudanese pound.

The sharp increase in the price of the country’s main staple food had a negative impact on food security. Based on household survey data and price monitoring, a large majority of the general population was believed to be unable to afford the local food basket.