After having spent 10 years of asylum in the Central Africa Republic (CAR), 1,494 people have returned to their home villages in Dafag in South Darfur.

Facilitated by the UN Refugee Agency (UNHCR) and the governments of Sudan and CAR, the refugees began their return in December, via 66 UNHCR-chartered flights to South Darfur, the UN Office for the Coordination of Humanitarian Affairs (OCHA) in Sudan reported in its latest bi-weekly bulletin.

The returnees are being provided with support packages that include plots of land, non-food items and cash grants for shelter materials. The World Food Programme (WFP) is also providing a two-month food ration.

The refugees who fled from South Darfur to the CAR in 2007 expressed their intention to return to Sudan in November last year, following improvements in the security situation and the disarmament of armed groups in their home villages.

UNHCR and the government’s Commissioner for Refugees (COR) are working with the South Darfur Ministry of Health, local authorities and internation partners to enhance services in the area of return.

More than 900 refugees return to Chad 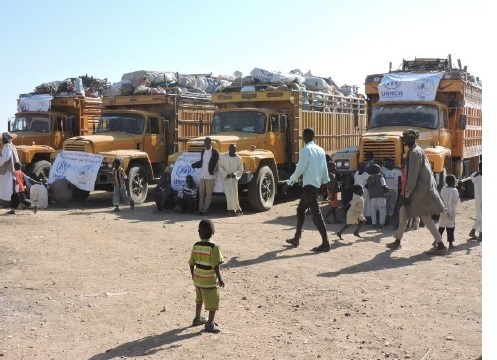 Since the return operation for Chad refugees began on 18 December last year, 944 of them have returned so far to Moudeina, in Sila region of eastern Chad, in three convoys.

By April 2018, it is expected that up to 4,000 refugees will have returned to Chad, after seeking refuge in Darfur for more than 10 years.

The voluntary repatriation of Chadian refugees follows the signing of a tri-partite agreement in May 2017 between UNHCR and the governments of Sudan and Chad, outlining key considerations for return.

The improvement of health indicators in North Darfur has led international NGO Médecins Sans Frontières-Spain (MSF-Spain)—the main health provider—to phase out of Sortony camp for the displaced, and is currently discussing its handover, scheduled for the end of March 2018, with the North Darfur Ministry of Health.

Plans are underway for a joint visit to the area—including representatives from MSF-Spain, state and federal Ministries of Health, and the government’s Humanitarian Aid Commission (HAC)—to better define the handover process and the time-frame needed to accomplish it.

The international NGO Oxfam America and the government’s Water and Sanitation Department (WES) have been maintaining the water supply in Sortony benefiting an estimated 21,600 displaced people.

Plan International has been providing water, sanitation and hygiene services in North Darfur’s Zamzam and Tawila camps for the displaced in response to an acute watery diarrhoea outbreak.

Activities include the daily water chlorination of 43 water sources with chlorine supplies provided by WES.

Trained community hygiene committee members are carrying a number of hygiene promotion activities in both camps.

Humanitarian funding for Sudan drops in 2017

The Sudan Humanitarian Response Plan (HRP) 2017 received 45.4 per cent of the $ 804 million budgeted for the country, reported the Financial Tracking System (FTS).

Almost 13 per cent lower than in 2016, this reduction in this year’s contributions represents decreases in funding as a percentage of funds requested, and the actual amount provided, compared to the past five years.

Similar to previous years, the USA, the EU and the UK are the primary donors, and their contributions accounted for almost 70 per cent of the $365 million disbursed for HRP 2017. Even so, US funding for the HRP in 2017 dropped by about $100 million compared to 2016, UK funding reduced by almost half ($34.2 million) and EU funding decreased by 14 per cent.

The UK Department for International Development (DFID) topped 2017 with a £ 71.5 million (about $ 96.2 million) in multi-year contributions to the Sudan Humanitarian Fund (SHF), UNHCR, and WFP to assist people in need in Sudan.

The SHF received a £ 31.5 million ($ 42.1 million) multi-year contribution to help the humanitarian community in Sudan provide life-saving support to millions of people in need of assistance.

The multi-year contribution of £ 7.5 million ($9.9 million) received by the UNHCR will be used to respond to the critical needs of South Sudanese refugees in Sudan, as well as host communities in White Nile, West and South Kordofan, and East and South Darfur.

WFP received a two-year contribution of £32.5 million ($43.7 million) to continue support to displaced pople in Darfur who have not had regular access to food for many years.

Sorghum and millet prices abnormally increased by 10 to 40 per cent between October and November 2017. Field reports obtained by FEWS NET suggest that some of these increases may be caused by slight delays in harvests this year, combined with shifts in planted area for cereal crops versus cash crops, with prices for the latter more than twice as high than at the same time last year.

Field reports further indicate that farmers are currently accessing sufficient cash income from the sale of cash crops, to allow them to hold on to and sell cereals later in the year at more advantageous prices. Overall, November levels of sorghum and millet prices were on average 25 to 55 per cent higher than on the same period last year, and 50 and 80 per cent higher than the five year average for sorghum and millet, respectively.

FEWS NET said that main season crop harvests underway since October are likely to continue into January 2018. The harvest of cash crops (sesame and groundnut) is complete, while sorghum and cotton harvests in the irrigated and rainfed sector is still underway.

Preliminary findings of the inter-agency Crop and Food Supply Assessment Mission (CFSAM) conducted during November/December 2017 suggest average to above-average harvests are likely in most areas of Sudan, except in Kassala and the northern parts of El Gedaref and North Darfur states, and the Kordofan region, where cumulative rainfall was below normal and/or long dry spells occurred between June and September 2017.

In 2017, WFP sourced more sorghum from Sudan than ever before, totalling 390,000 MT for use in the country as well as providing for regional operations.

WFP is at the final stage of its first purchase of sorghum from the Agriculture Bank of Sudan, in addition to a potential strategic partnership agreement with the Strategic Grain Reserve, both of which support local Sudanese farmers and boost the national economy, the OCHA bulletin reads.