This year’s rainy season (June-September) continues to take its toll on Sudan’s most vulnerable communities, the UN Office for the Coordination of Humanitarian Affairs (OCHA) in Sudan reports in its latest bulletin. Other items in the bulletin concern the recent training of 30 health practitioners on procurement and supply chain management, the situation in Abyei where about 170,000 residents remain vulnerable, the support by the UN to Sudan with $20 million this month.

Heavy rains and consequent flash floods have so far affected more than 142,000 people in 14 out of Sudan’s 18 states. West Kordofan, Kassala and El Gedaref are in particular affected according to the governmental Humanitarian Aid Commission (HAC). 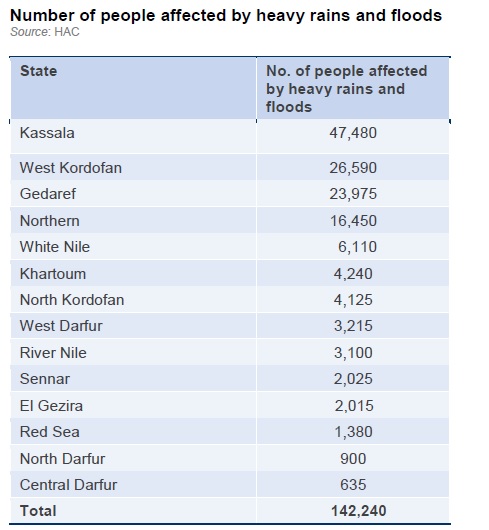 Annual floods in Sudan occur for a variety of reasons, including poor drainage systems, sub-standard construction and with some of the poor resorting to living in areas prone to flooding. In rural areas – where two-thirds of Sudan’s population of 38.6 million live – extreme dry spells cause the ground to harden and lose its capacity to absorb rain and ground water, increasing the likelihood of flash floods.

Sudan’s medicine and medical supplies’ imports dropped by 36 per cent during the first half of 2018, with consequent increases in the price of lifesaving medicine. Besides curbing the health sector capacity to deliver quality health services, the higher price of medicines particularly affects the most vulnerable 5.5 million people in need of lifesaving assistance, including displaced people and refugees.

The Sudanese Ministry of Health, HAC, and the World Health Organization (WHO) therefore offered 30 health practitioners a training of trainers on procurement and supply chain management in August. Among them were health centre coordinators, pharmacists, public health officers, and WHO implementing partners.

About 170,000 people in the Abyei Area remain vulnerable. The largest group belongs to the pastoralist Misseriya, 15,000 are Ngok Dinka, and 11,000 are refugees from South Sudan.

In order to bridge humanitarian financing gaps, the UN activated its Central Emergency Response Fund support to Sudan this month with $20 million.

Humanitarian assistance for Sudan slipped in 2018. By end July reported funding had reached about 30 per cent of the $1 billion requirement under the 2018 Sudan Humanitarian Response Plan (HRP).

In the first quarter of the year, 87 humanitarian partners provided assistance to 2.1 million people of the 4.3 million targeted under the HRP, according to the Sudan Humanitarian Dashboard for January-March 2018.

The under-funding compromises 15 years of lifesaving work by humanitarian partners in the country, who have provided annual emergency assistance to about 5 million people in water and sanitation, food, child protection, emergency shelter, education, nutrition, health and livelihoods.