During Sudan’s lean season, from May to July, the number of Sudanese requiring food assistance is expected to rise to six million. In particularly displaced people in North Darfur, parts of South Darfur and South Kordofan need aid, as staple food prices increase at the beginning of the season. The USA again donated huge quantities of sorghum, to be distributed to displaced and refugees in the country. The El Neem camp for the displaced in East Darfur has improved access to drinking water. In early June, some 180 refugees officially returned from neighbouring Chad to their places of origin in Darfur.

The number of Sudanese in crisis and emergency levels of food security is expected to rise to six million from 5.5 million people in April, the UN Office for the Coordination of Humanitarian Affairs (OCHA) reported in its latest biweekly bulletin.

The Integrated Food Insecurity Phase Classification (IPC) reports that food insecurity has increased in 13 per cent of households. During the projected period, households are expected to face a reduction in the number of meals or shift to less nutritional food.

Similarly, FEWS NET reported in its May Key Messages update that as the lean season gets underway, parts of Kassala and North Darfur states affected by severe dryness in 2017, and displaced people in Jebel Marra will face crisis levels of food security through September. In South Kordofan, the situation will deteriorate from crisis to emergency levels between June and September.

During April, sorghum and millet retail prices increased by 5 to 15 per cent across most markets monitored by FEWS NET compared to the previous month, with higher increases of up to 25 per cent in some markets. In May the national average retail price of sorghum significantly increased by 9.7 percent in areas monitored by the UN World Food Programme (WFP), compared to the previous month.

Persistent fuel shortages have continued since March, according to FEWS NET. In areas such as North Kordofan, North Darfur, and El Gedaref states, field reports suggest that fuel shortages have affected supplies of water for livestock consumption and irrigation of off-season crops. High fuel prices could also drive increased production costs during the main agricultural season in the semi-mechanised rain-fed and irrigated sectors.

US support for food insecure people in Sudan

A new food donation to Sudan by the US Agency for International Development (USAID) will provide food assistance to 1.5 million of Sudan’s most vulnerable people for the next six months.

Managed by WFP, the 55,000-metric ton donation of US-grown sorghum is scheduled for distribution to displaced people and refugees, including those from South Sudan, and other vulnerable groups. 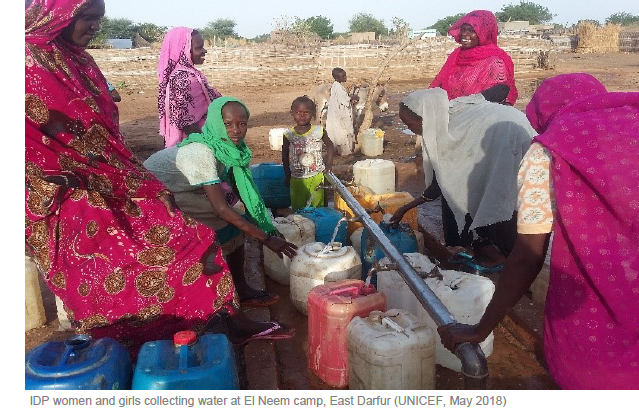 A new project by the UN Children’s Fund (Unicef) and Care International Switzerland (CIS) has provided improved access to clean drinking water to the 85,500 residents of El Neem camp in East Darfur.

The provision of clean water helps improve hygiene and health, contributing to a decrease in the prevalence of water-borne diseases. It is also helping to combat the immediate and underlying risks of malnutrition for 13,700 children under five, who represent about 16 per cent of the camp population.

The installation of a power grid with a solar system has as well reduced daily operational and maintenance costs by about 60 per cent. The solar system also saves on time spent for getting fuel and transportation, and reduces harmful emissions.

As part of a voluntary repatriation programme, in early June, some 180 people – who have been living as refugees in neighbouring Chad – officially returned to their places of origin in Sudan.

Registered in El Tina, a border town in North Darfur State, the returns were managed under the auspices of Sudan and Chad refugee authorities and the United Nations Refugee Agency (UNHCR).

Since the start of the programme in April this year, UNHCR has assisted a total of 353 refugee returns to Darfur from Chad.

While UNHCR works continuously with government and other partners to ensure refugees return in safe and dignified conditions, the Return, Recovery and Reintegration sector, chaired by the government’s Voluntary Return and Reintegration Commission, the UN Development Programme, and the International Organization for Migration are expected to support reintegration assistance for returning populations, including enhancing basic services in return areas.