On Tuesday evening, two brothers were crushed in Khartoum North when a runaway vehicle belonging to the National Intelligence and Security Service (NISS) destroyed part of their home. One boy is dead, while the other clings to life in a Khartoum hospital.

Residents of the neighbourhood said a vehicle belonging to the security forces with no licence plates, driven by and NISS agent, collided with the home of the two brothers in Darushab in Khartoum North, and demolished the outer wall.

Three-year-old Muayed Yasir was killed instantly and his six-year-old brother was seriously injured. 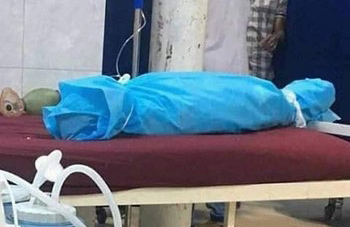 Reports by the official spokesman for the police reported that the military vehicle caused the immediate death of a one boy, while his brother died later of his injuries. However doctors at the International Hospital in Khartoum North denied the death of the second child, pointing out that he is alive but still in intensive care.

The police spokesman said members of the public tracked-down the vehicle, seized the driver and passengers, and handed them to the traffic police station in Khartoum North. The suspectds were later transported to their military base, where they will be charged under the Emergency Law.

People demonstrated yesterday in front of the International Hospital, condemning the vehicle’s driver.

The demonstrators chanted slogans in front of the hospital where the injured child lies shouting for retribution and overthrowing the regime.

Agents of the National Intelligence and Security Service (NISS) detained six youths from the children’s neighbourhood of Darushab after the sunset prayer.

The pharmacists at Omdurman Teaching Hospital also carried out separate protests in Omdurman to denounce the children’s abuse and to demand the overthrow of the regime.

In the context, the legal expert and former judge, Mohamed El Malik, called on the judges in the country to remove themselves from the emergency courts established by a decision of the President of the Republic.

El Malik said that the provision of emergency courts and tribunals in the emergency order issued by the President is flawed in form and content and considered it a violation of the Emergency and Protection of Public Safety Act of 1997, which stipulates that the authority to establish emergency courts is exceptional.

The current emergency courts derive their powers from the President and not from the constitutional judicial system. Explaining that the criminal courts are entrusted with the implementation of emergency orders in normal situations.

Professor: GERD has economic and social importance in Sudan