Since Sudan reached the public eye over years of civil war in Darfur, Kordofan, and the Blue Nile, under which war crimes, crimes against humanity, and genocide were committed, Sudanese women have been cast as the victims of physical and sexual violence in the media.

While Sudanese women continue to be disproportionately affected by violence in its various forms in the country, they have also been at the forefront of the revolution, demanding justice and peace. “Known to be leaders in all aspects of society, these women have taken on the part of caretakers, heads of households, and now, the face of the Sudanese revolution,” according to Washington-based Darfur Women Action Group (DWAG).

Women’s slowly-increasing influence in the emerging democracy of post-revolution Sudan has highlighted the many roles they play in Sudanese society, as business owners, doctors, lawyers, activists, and cabinet ministers as well as mothers, sisters, nurses, caretakers, teachers, housekeepers, and cooks.

Radio Dabanga strives to be at the forefront of news organisations projecting these voices on the Sudanese and international media landscape.

According to Radio Dabanga Project Officer, Laura McDowell: “When women’s voices are in the minority, there can be a lot of pressure on individual women to present a ‘women’s perspective’, which is problematic. But when we regularly hear from a whole range of women, not just about ‘women’s issues’ but on all matters, then we get closer to building a more inclusive and better understanding of some of the complex issues facing Sudan.”

In 2019, Radio Dabanga began monitoring its media content and audiences, with a specific focus on representation of women in the audience and in the newsroom.

Overall, the gender balance of both presenter and guest voices at Radio Dabanga has improved since gathering of gender-disaggregated data began at the end of 2019.

There has also been a significant rise in the diversity of women interviewed on the radio. In late 2019, only 16 per cent of Radio Dabanga guests were women. By February 2021, this figure almost doubled, with more than 30 per cent of Dabanga guests being women. Across all Radio Dabanga feature programming, including shows on youth, democracy, health, and transitional justice, women with different areas of expertise and experiences are sharing their knowledge. 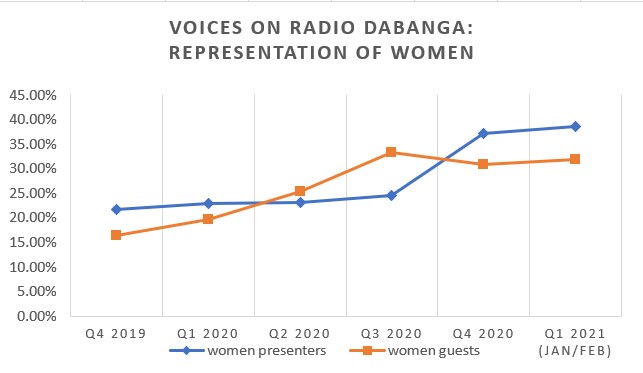 Due to cost and accessibility barriers, it is difficult for Radio Dabanga to get reliable and up-to-date data shortwave radio and satellite TV audiences in Sudan. This is particularly true in areas that are remote or experiencing conflict, including Dabanga’s priority target areas: Darfur, Kordofan, and the Blue Nile.

Although the gender of Dabanga’s website audiences remains skewed in favour of men, it is encouraging that in the younger age groups, this gender imbalance is less pronounced. For example, among 18 to 24 year olds on both Arabic and English website, women represent more than 40 per cent of users.

“It’s possible that more women are accessing Dabanga’s content online than the figures show. Research has shown that when families or couples share a computer or phone, it’s more likely to be owned or controlled by men in the household. Nonetheless, we know that there is still much work to be done to ensure Dabanga’s online and radio content is relevant, accessible, and interesting to all genders,” says Laura.

Women especially face systemic barriers on the path to becoming journalists or being cited as experts by Sudanese media.

As part of the 2021 Media4Women campaign and in light of International Women’s Day, Radio Dabanga’s Kandaka radio programme will focus on the contributions of and challenges facing women media producers throughout March. Freelance radio producer and journalist, Hanadi Saeed, will be speaking with women journalists about their experiences working in Sudan’s rapidly changing media environment.

The African Centre for Justice and Peace Studies (ACJPS), which is dedicated to creating a Sudan where all persons and groups are granted their rights to non-discrimination, equality and justice, stated in January that the use of criminal law to intimidate or silence activists and others who exercise their right to freedom of expression, online and offline, is not new in Sudan. The regime of ousted dictator Omar Al Bashir frequently relied on crimes of defamation and publication of false news to harass real or perceived critics of the regime.

The organisation, based in New York, pointed out that Sudan is party to of the African Charter on Human and Peoples’ Rights and therefore has a duty to “ensure the elimination of every discrimination against women and also ensure the protection of the rights of women.”

ACJPS also called on the authorities to take the necessary steps, legislative and others, to put an end to discriminatory actions that impair equal enjoyment of rights by women, after a human rights and women’s rights defender was sentenced to one year in prison over a Facebook video she broadcast.

The Global Media Monitoring Project (GMMP) research indicates that while there is some progress on some indicators concerning representation of women in the media, women’s invisibility as subjects and sources in the news is still the norm, especially for marginalised women.

In an interview with Free Press Unlimited*, an NGO based in Amsterdam, the Netherlands, which has supported Radio Dabanga operationally for more than ten years, Sarah Macharia, the global coordinator of GMMP said: “We have seen some small gradual changes. Between 2000 and 2005 there was a three percent increase (from 18 to 21 per cent) in women as sources and topics in the news. Between 2005 and 2010 we saw another three per cent increase. However, between 2010 and 2015, it stagnated.”

Macharia says that another statistic, namely the percentage of women producing news, did not change at all between 2005 and 2015. “Across the decade, only 37 per cent of the news was reported by women. That led us to wonder if there was a global ‘glass ceiling’ for women reporters. I can say that 2020 is looking a bit more promising. We are noticing some small steps in the right direction. The change is small but it is there.”

Women have been visible leaders on the frontlines of the 2018 December Revolution against the regime of Al Bashir, ousted in April the following year. News outlets estimated that about 70 per cent of the protesters were women.

Since the fall of the former regime, the death penalty for apostasy has been repealed. Female Genital-Mutilation (FGM) has been outlawed and the execution of children has been banned. Women no longer need the consent of their husband or male guardian to travel with their children.

The Constitutional Document of August 2019 guarantees 40 per cent representation to women in the 300-seat Legislative Council, still to be formed. The new quota is an increase from the previous representation quota of 25 per cent, which was set during the former regime.

Yet, Sudanese women remain on the side lines. Only 12 per cent of the Juba Peace Agreement table included women. Women’s rights groups in Darfur and Khartoum continue to call for a broader representation in the new transitional government and in all aspects of Sudanese life.

*Free Press Unlimited, which has supported Radio Dabanga operationally for more than ten years, is a not-for-profit NGO based in Amsterdam, the Netherlands. Free Press Unlimited helps local journalists in conflict areas to provide their audience with independent news and reliable information. The information that people need to survive and give shape to their own future.