Imam El Sadig El Mahdi, leader of the opposition National Umma Party (NUP) and Chair of the Sudan Call alliance, arrived at Khartoum airport this afternoon, and was greeted by friends and supporters.

El Mahdi was then greeted by public supporters in a parade through the streets of Omdurman. 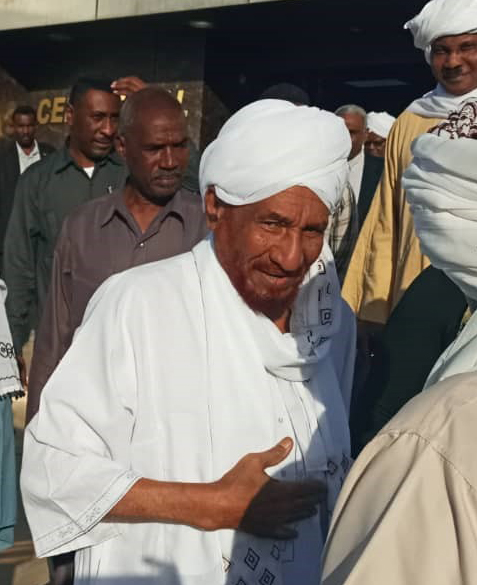 The returning opposition leader was due to address the public later today.

El Mahdi announced that he would return to Sudan on December 19, to coincide with the anniversary in 1955 of Sudan’s Declaration on Independence and transformation in January 1956 into a republic.

In an earlier interview with Radio Dabanga, El Mahdi said: “My return to Sudan comes to meet the demands of people in Sudan after I completed work abroad.” He said that he is ready to face any legal issues. In April this year, following El Mahdi’s election as chairman of the Sudan Call alliance, the State Security Prosecution service in Sudan instructed a complaint be filed against El Mahdi, “for dealing and coordinating with rebel armed movements to overthrow the regime.”

Now, El Mahdi said that “If the regime confronts me, all that we demand is a fair and public trial”. The opposition leader is not returning to have his party participate in what he called “the absurd elections”. Al Bashir has been in power since 1989 after a military coup on an elected government and has continued to be elected.

He added that his return may lead to a continuation of the dialogue between the authorities and the opposition in Sudan.

El Mahdi remained abroad in a self-imposed exile until early 2017, when he returned to the Sudanese capital. He left Sudan in August 2014 after having been detained for one month. He was accused by the National Intelligence and Security Service of undermining the Constitution. El Mahdi had denounced the widespread attacks against civilians in Kordofan and Darfur by the paramilitary Rapid Support Forces (RSF) commanded by the NISS.

Sudan to continue the liberalisation of its economy

PM Hamdok stresses the importance of refugee support and solidarity