Drivers queue overnight for fuel as Sudan runs on empty

The fuel crisis in Sudan continues to impact on everyday life across the country. In the capital Khartoum and elsewhere, drivers are forced to queue for fuel overnight. This calls into question repeated official statements that the shortage has been resolved.

The crisis has forced tens of thousands of public and private transport users in the capital and the states to walk for long distances after failing to get a means of transport.

The overnight queues at filling stations have proved an opportunity for Khartoum’s entrepreneurial street vendors, who ply a steady trade catering for the hapless fuel-seakers.

The minister refused to answer questions before Members of Parliament regarding the funding by the Central Bank of Sudan to fill the fuel gap.

“I am talking about funding because I don’t want to join Ghandour,” he said, referring to Sudan’s former Foreign Minister Ibrahim Ghandour who was dismissed by President Omar Al Bashir last month for criticising the financial situation of the country’s diplomatic corps.

The stoppage of water pumping engines for lack of fuel in parts of Kordofan have resulted in fights breaking-out among the public as tempers flare to draw the little water that is available. 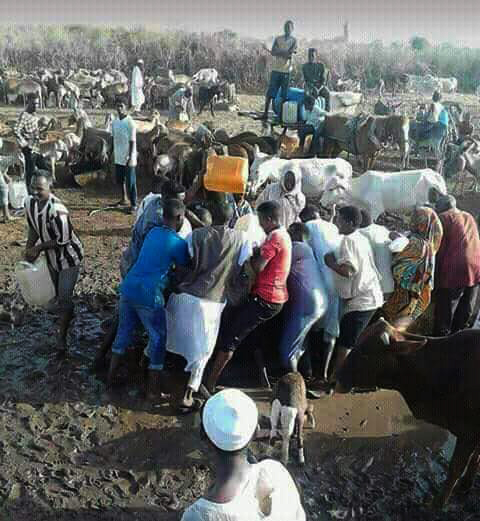 The locality of New Halfa in Kassala state instructed owners of vehicles to get a monthly card in order to get fuel from pumps.

A vehicle owner from New Halfa reported to Radio Dabanga overcrowding of the owners of vehicles in front of the locality building to get the monthly card for a fee of SDG 120 (*$4.26).

He said the vehicles are allowed to fill their tank once a week with the monthly card.

He explained that the traffic department requires the license of the vehicle to issue the card.

They said they have to pay thousands of Pounds to members of the regular forces to get the card through avoiding crowding and waiting for days.

He pointed to the accumulation of crops in the market of New Halfa because of the complete stop of the transportation vehicles due to the fuel crisis.

The price of a gallon of petrol in Nyala in South Darfur has amounted to SDG 175 ($6.22) and a barrel of water to SDG 40 ($1,42) in the districts of the city which are not connected to water networks.

Nyala is also suffering from a power outage where the electric supply is distribution one day north and a day south.

Traders in Nyala denounced the state government’s decision for each trader to pay SDG 1,600 ($57) as a contribution for the inter-school competition to be held in December.

The National Intelligence and Security Service (NISS) has forbidden newspapers in Sudan from publishing any material related to the fuel crisis.

In a directive to the editors of newspapers, the NISS called on them not to cover the crisis, but “to be satisfied with the official statements issued by the government on these topics”.

SCP: Sudan political and economic crisis ‘at point of no return’