Yesterday evening, people in various neighbourhoods in Khartoum took to the streets to protest against the reinstated Transitional Sovereignty Council (TSC) and call for a civilian government, chaired by Prime Minister Abdallah Hamdok. The Forces for Freedom and Change (FFC) strongly condemned the move.

On Thursday, Gen Abdelfattah El Burhan, Commander-in-Chief of the Sudan Armed Forces (SAF) and leader of the military junta that seized power in Sudan in a coup d’état on October 25, made known that the Sovereignty Council will be reinstated under his chairmanship, with the same military members and rebel leaders as before but with a new set (with one exception) of civilian members.

In response, the Central Leadership Council of the FFC, that cooperated with the military in establishing the government of Prime Minister Abdallah Hamdok in 2019, and again in February this year, issued a statement condemming the announcement of the coup leader.

“This afternoon, Thursday, November 11, the commander of the military coup in the country announced the members of the coup regime’s Sovereignty Council in a way that clearly confirms its indifference to the pulse of the street and the forces of life, and its continuation of unilateral measures in the same way as the former regime [of ousted President Omar Al Bashir],” the statement reads.

“The Council announced today does not represent a Sovereignty Council, but rather a mixed coup council. [..] We affirm that the attempts of harassment, violence, and arbitrary arrests will not stop our [protest] marches. The revolution has begun anew to liberate the country from all putschists, and the streets will not betray us.” 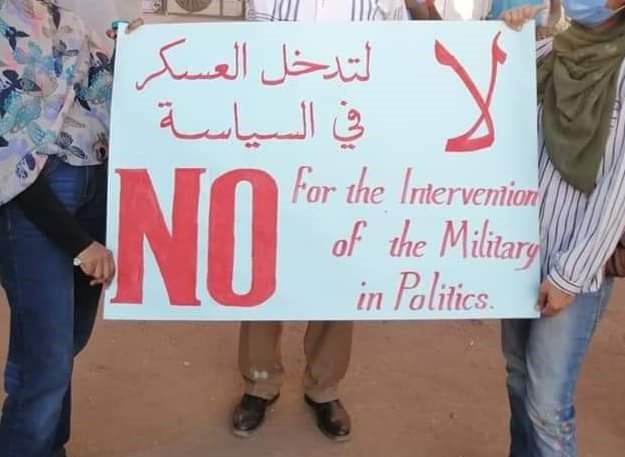 Khartoum witnessed various street protests immediately after the announcement and later that day, as various tweets reported in defiance of the persisting general Internet blackout.

According to a number of tweets, people in Kalakla, Ed Deim, Burri, El Taif, El Riyadh took to the streets and sang slogans such as “Burhan malu ayan?, Aaradu shinu? Aafa wa bayan, Alaju shinu? Kober yaman” [What’s wrong with Burhan, is he sick? What are the symptoms? Exemptions and statements, And his treatment? Kober Prison].

No violence reported against demonstrators in Darfur camps

US official: ‘Excessive violence against demos will not pass without consequences’