Banks operating in Khartoum and its suburbs have seen early morning crowds to get a little of their savings to cover their Eid needs to no avail. A bank source said there were no funds in the coffers of the Bank of Sudan to be disbursed to banks to meet customers’ demands.

As reported by Radio Dabanga on Thursday, The Central Bank of Sudan (CBoS) has issued an oral order to banks reducing the amount of cash withdrawals to customers from SDG 2,000 (*$70) to SDG 1,000 ($35).

Economic analyst Kamal Karrar told Radio Dabanga that the move would increase the suffering of employees and workers who have been forced to deposit their salaries in the banks. 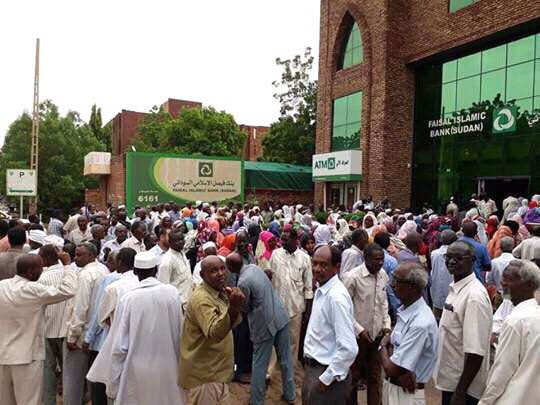 The bank source told Radio Dabanga that the banks’ own delegates are standing in queues in front of the Central Bank, which is suffering from a lack of liquidity, and can barely afford to save money to cover purchases of basic commodities such as fuel and wheat.

The banker confirmed that 90 per cent of the about 2,000 ATMs operating in Khartoum have had no cash for months.

He said many bank customers and ATM cardholders had lost their services after repeated failed attempts to withdraw from their bank’s own ATMs connected into the Bank of Sudan network of more than 40 banks. 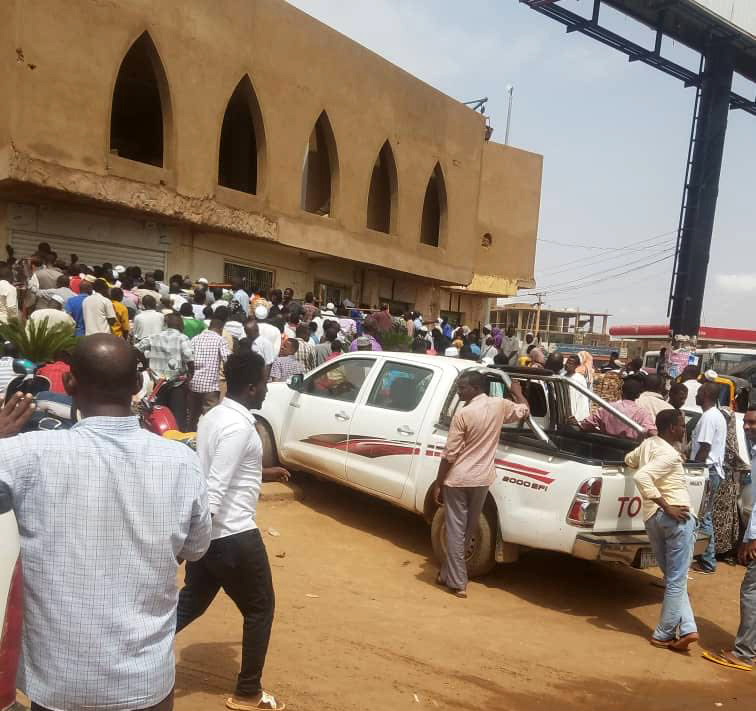 On Sunday, the suffering of workers at the University of Khartoum reached peak in an attempt to get their salaries and Eid grant, which many found it difficult to get from their bank account.

Prof Mohamed Yousef Ahmed at the University of Khartoum told Radio Dabanga that university professors, employees, and workers were informed last week that their salaries plus the allocated grant for Eid El Adha had been placed in their account at the bank. The professor said that many of them have tried to withdraw them from the only bank to meet the Eid requirements to no avail.

He pointed out that the bank allocated only SDG 500 ($17.75) per person and even this amount was not available to all, as long lines led to closure of the street, causing suffering for teachers and senior employees who stood for long hours waiting.

He added that many of them could not withdraw any amount and travelled to the provinces without money.

The teachers of the national capital Khartoum have suffered greatly for non- payment of their salaries one day before the Eid until Sunday, after leakage of information confirming that the bank, in which their salaries have been deposited does not have sufficient liquidity to pay salaries, Eid grant and that Thursday was the last day of the banks before the closure for holiday.

In addition, the liquidity crisis in the Sudanese banks has led some to buy iron safes, put their money in to keep them it in the houses.

Some of them use electronic vending machines which have become a haven for those who want cash instead of goods.

The vending machine owner receives a commission for cash to the ATM cardholder who requests this service. 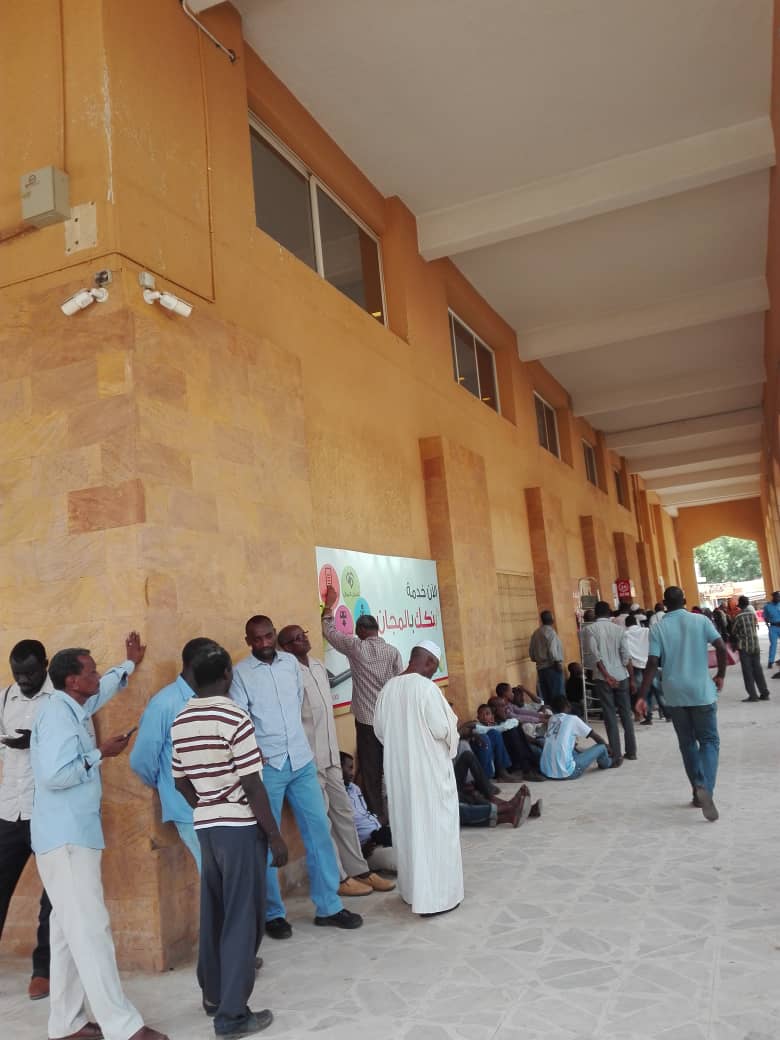 Lawyer Nabil Adeeb said that the call of some to file criminal complaint against banks under the pretext of treason or criminal possession is a call that shows naivety with no legal ground. He explained to Radio Dabanga that the relationship of customers with banks is not a relationship of trust, but a creditor and debtor and that banks are not obliged to keep all funds in the form of liquidity.

The intent to acquire criminal funds for customers is not included in this context.

He explained that the only forms in this case is that the bank returns the check issued to a third party, exposing the person who is being issued the check to criminal accountability rather than the bank itself.

Also, he said filing a civil lawsuit is useless because any debtor party can put the money in your account but you cannot withdraw it.

He told Radio Dabanga that the introduction of this problem in a lawsuit is naive and that the issue is dealt within the political responsibility of the government, which withdraws the liquid cash from banks without setting any account or regard to the prescribed rates that allow customers to withdraw their money whenever they want.

He told Radio Dabanga that the government’s policy is now very naive that will stop investment and is a clear example of the crime of sabotaging the national economy.

Wad Madani in El Gezira state witnessed a large number of people lining up in front of the available ATMs to withdraw part of their money to meet the requirements of the Eid, causing the depletion of liquidity from the ATMs.

Samir Salah told Radio Dabanga from Wad Madani that the teachers and the rest of the staff in the greater Madani locality have not been paid their salary for August and that the grant was paid through the localities.

In El Gezira state, part of the employees and workers of greater Madani locality have been paid Eid grant the grant of a month’s basic salary, while the rest of the workers of the locality south of El Gezira have not due to lack of liquidity.

Salah said they have not been paid the grant under the pretext that the bank had not have enough liquidity, which deprived teachers and other employees of meeting the Eid demands because the banks closed on Sunday for the Eid holiday.

Families in Abu Jubeiha in South Kordofan failed to buy holiday supplies due to high prices and lack of liquidity in banks.

Residents told Radio Dabanga that most families have been unable to buy children’s clothing and sheep.

They said working banks had to close due to lack of liquidity yesterday.

The markets of Senga in Sennar state witnessed a stagnation in sales movement due to lack of liquidity and rise of prices.

An employee of the health sector told Radio Dabanga from Senga that the employees and workers have not received the salaries for August in advance, as was the practice in the previous Eids.

He said that the banks were free of liquidity and most of the banks in the city had stopped, except for two.

Sennar witnessed residents lining up in long queues in front of banks and ATMs to get money for Eid.

An employee from Sennar told Radio Dabanga that all the promises made by the Ministry of Finance and the Union of Workers to pay the employees and workers cash in advances to meet the needs of the Eid have failed without receiving anything except Eid grant.

Until yesterday evening, workers and employees of North Darfur have not received the government-approved grant for Eid because of the liquidity crisis, while regular forces have not been paid their salaries and were told that they would be paid after Eid as the top priority is for the state workers.

Teacher Hafiz Ahmed told Radio Dabanga from Nyala that the teachers were paid their salaries yesterday but they are small and cannot help them to buy supplies for the Eid.

He said that all employees are no longer thinking of sacrifice lamb because of their high prices and the limited salaries that do not help them buy children’s supplies nor provide a decent life.

He described the rise of prices of foodstuff and consumer goods in Nyala.

The price of foodstuff, consumer good and sheep in Um Dukhun in Central Darfur on the border with Chad have surged.

A housewife from Umm Dukhun reported to Radio Dabanga that the surge of price of cooking oil, sugar and meat.

She said that the rise of price of sheep forced them not to sacrifice on this Eid, where the lowest price of lamb is SDG 2,000, while a kilo of lamb meat has risen to SDG 120.