The UN High Commissioner for Human Rights Michelle Bachelet on Wednesday signed an agreement with the government of Sudan to open a UN Human Rights Office in Khartoum and field offices in Darfur, Blue Nile, Southern Kordofan and East Sudan.

Bachelet and Sudan’s new Minister of Foreign Affairs Asma Mohamed Abdalla, signed the agreement in the presence of Prime Minister Abdalla Hamdouk in New York, where they are attending the UN General Assembly.

“We have witnessed with admiration the persistence of the women, men and youth in Sudan in asserting their human rights. The road ahead promises to be full of challenges, but we are ready to assist to ensure human rights permeate the transition,” Bachelet said

“With this milestone agreement, we are poised to accompany Sudan through an important moment in its history, to offer all our support to make this transition a success for the human rights of all the people of Sudan.”

High Commissioner Bachelet said the Office seeks to support the transition particularly in four critical areas, as discussed with the government:

1. Combatting inequality and supporting the development of policies that will help provide for basic economic and social rights and the empowerment and participation of women;
2. Legal and institutional reform, to help the Government bring domestic legislation in conformity with its international human rights obligations and develop strong institutions for the protection of human rights;
3. Transitional justice: to support accountability and reconciliation, with the meaningful participation of victims in these processes;
4. Strengthening the opening of democratic and civic space, including through stronger participation of women and minorities. 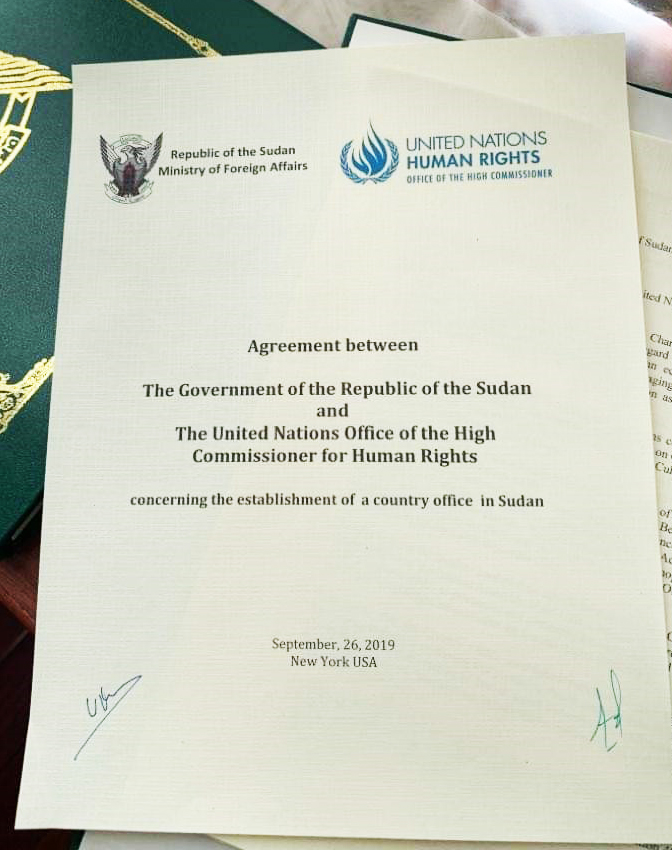 “The Constitutional document signed in Sudan on August 17 already contains many positive commitments to human rights, including the bill of rights and a commitment to work with my Office. I note also the establishment of an independent national investigation committee to investigate the repression of peaceful protestors on 3 June,” Bachelet said.

“I look forward to working with Sudan to build on the momentum of the remarkable gains of the past few months and ensure that they are firmly entrenched and irreversible.”

Sudan’s Minister of Justice and Chairman of the Consultative Council for Human Rights, Dr Nasreldin Abdelbari, and the accompanying delegation arrived in Geneva in Switzerland on Monday morning to participate in the 42nd session of the UN Human Rights Council.

In a press statement, the Charge d’Affaires at Sudan’s permanent mission to Geneva, Ambassador Osman Abufatma, said that the Minister of Justice will address the Human Rights Council to reflect the positive developments in Sudan, especially with regard to the establishment of the transitional government structures in accordance with the Constitutional Document.

He indicated via the official Sudan News Agency (SUNA) that Minister Abdelbari will also present the report of Sudan on human rights during the interactive dialogue sitting with the independent UN Expert on the human rights situation in Sudan, Aristide Nononsi, “whose mission in Sudan will end immediately after opening of the Office of the Commission of Human Rights in Sudan”.

The Charge d’Affaires indicated that the Minister Abdelbari will meet on the sidelines of the council’s session with the ambassadors of the African, Arab, Islamic, and European groups, besides the Deputy High Commissioner for Human Rights and Chairperson of the Council for Human Rights.

In its resolution 39/22, the Human Rights Council decided to renew the mandate of the Independent Expert on the situation of human rights in the Sudan “for a period of one year or until the operationalisation of a country office of the Office of the United Nations High Commissioner for Human Rights, whichever was earlier”.

It notes that the present report covers the period from 28 September 2018 to 30 June 2019. The report is based on remote consultations and information made available to the Independent Expert by the Government of the Sudan and by other sources, including civil society organizations working in the Sudan. The Independent Expert analyses the situation of human rights in the Sudan, outlines recent developments and the continuing human rights challenges in the country, assesses the implementation of the recommendations contained in the previous reports of the Independent Expert, and provides recommendations, addressed to the Government and other stakeholders, necessary for improving the situation of human rights in the country.

The Human Rights Council requested the government of Sudan and OHCHR to engage constructively to agree on the modalities and mandate for the establishment of a country office no later than September 2019, and to present their oral reports on progress towards the opening of a country office during an enhanced interactive dialogue at the forty-first session of the Council.

In his report to the Council, Independent UN Expert on the human rights situation in Sudan, Aristide Nononsi takes note of the challenges facing the Sudan, the country’s authorities and other stakeholders in ensuring and sustaining a peaceful transfer of power to a civilian-led transitional authority. He encourages all stakeholders to engage constructively with the mediation efforts and the joint proposal of the Ethiopian mediator and the special envoy from the African Union and to resume talks to ensure the swift transfer of power to a civilian-led transitional authority.

Nononsi commends the positive engagement of Sudanese authorities with OHCHR to work towards the establishment of a country office with a full mandate, also noting the interruption of this engagement following the removal of President Al Bashir, and underlines that the countrywide developments in the Sudan have important security and human rights ramifications for Darfur.