The unprecedented floods and torrential rains that swept the country for five weeks has left at least 102 people dead and 46 injured. More than 64,000 homes have completely or partially collapsed. More than 5,000 head of livestock have died.​

In Omdurman, flood waters swept through Shagala. People were forced to leave their homes and go to public squares. In Khartoum North, the waters of the Nile flooded Um Dom in the East Nile district and caused the collapse of a large number of houses. A lot of property was lost. The victims took shelter in the local schools.

The El Gezira Ministry of Health in Wad Madani reported that ten more people died and five were injured. 1,269 families have been affected by the rains and floods that struck the state. 608 toilets, 20 government facilities and 247 houses collapsed completely, 904 partially. 58 animals died.

In Blue Nile state, torrential rains and floods caused damage in the localities Bau and El Tadamon, and the outskirts of Ed Damazin and El Roseires localities.

In El Gedaref, a tornado struck the area of Mafaza in El Rahad locality on Saturday. This led to the death of Safya Abdelhafeez, the complete collapse of schools and homes, and great losses in the village of Balla. Activist El Shafee Zakariya told Radio Dabanga that the villagers still live in the open without any shelter. He called on the authorities to intervene urgently and provide shelter materials, food and drinking water.

The torrential rains and floods led to the collapse of 100 houses in El Gureisha town in the eastern part of El Gedaref. Some 39 villages in the locality are now completely isolated and threatened by floods. Shihabeldin Wadelyam told Radio Dabanga that families are living in poor humanitarian conditions, or are forced to stay with their relatives after their homes collapsed. The area needs urgent reconstruction of roads and bridges, he said.

The situation in Tokar, Red Sea state, is even worse than before. Journalist Mohamed El Ameen said that 30 per cent of the people fled their homes. He expects forced evacuations in the event the water levels increase. “The disaster is much bigger than what can be done. There is a lack of food and safe drinking water, and all communication networks are out of order,” he said. “The hospital and press centre in Tokar town are closed because of the floods. Flies and mosquitoes are spreading.”

Minister of Irrigation and Water Resources Yasir Abbas expects a gradual decrease in water levels the coming weeks. At a press conference yesterday, he said that storing water in the reservoirs of the Roseires dam in Blue Nile state and the Merowe dam in Northern State mitigated this year’s extreme water levels and the severity of the disaster.

The minister stated that Sudan’s dams and reservoirs are safe. He denied that there is a crack in the Jebel Awlia reservoir in the south-western part of Khartoum, and called this “a rumour which is meant to create confusion and fear”. The flooding of the Soba and Masoudiya neighbourhoods in Khartoum has been caused by narrowing the river bed because of urbanisation, he added.

He said that 99 per cent of the Nile flooding is caused by extremely heavy rainfall on the Ethiopian plateau. It is expected that the Ethiopian Renaissance Dam will regulate the flow of the Blue Nile, and Sudan will no longer suffer that much from floods.

He referred to the decision to evacuate the residents of Tokar town and 43 surrounding villages to safe areas. This didn’t happen because the people refused to leave.

The Sudanese Secondary School examinations, scheduled to start on September 13, can take place as planned, he said, as there are no problems with the buildings where the exams will take place. There are some difficulties regarding students' access to the examination centres in some areas in Sudan, he admitted.

On Friday September 4, the National Security and Defence Council declared the country ‘a natural disaster area’ following flooding in 16 of the 18 states. The State of Emergency was imposed throughout the country, for a period of three months.

A high committee will be formed, headed by the Minister of Labour, to address the effects of the heavy rainfall and the record high water levels of the Nile during this rainy season.

According to Sudan's Humanitarian Aid Commission some 506,000 have been affected by the rains and floods, more thatn 110,000 of them in the first week of September alone. The UN Office for the Coordination of Humanitarian Affairs (OCHA) in Sudan made a map showing affected people, destroyed houses and damaged houses in 17 of Sudan's 18 states. 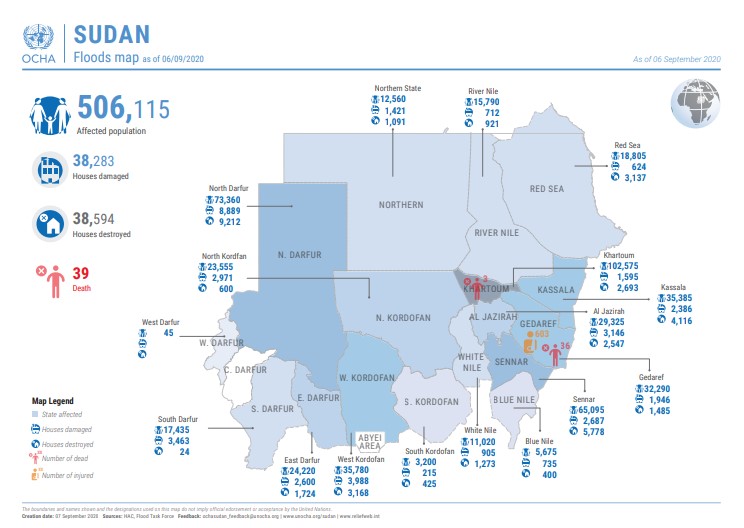