Sudan has been facing numerous disease outbreaks including dengue fever, Rift Valley fever (RVF), and chikungunya in the past months.

Dengue fever, RVF and chikungunya are vector-borne diseases while cholera is waterborne. The increase of these outbreaks can be linked to heavy rainfall and floods in the country that have left large pools of stagnant water, which are breeding sites for various types of vectors such as mosquitoes and house-flies.

The UN Office for the Coordination of Humanitarian Affairs in Sudan reported in its Sudan Situation Report updated on Thursday, that the Sudanese authorities and humanitarian partners are actively responding to these outbreaks across the country, providing health assistance, vaccinations, and vector control interventions.

Since the onset of the disease in early August, 535 dengue fever cases, including two deaths, have been reported in Kassala, Red Sea state, and North Darfur, South Darfur and West Darfur. The majority (499) of the cases were recorded in Kassala.

In Kassala and North Darfur, the state Ministry of Health activated weekly response taskforce meetings, and developed state-level preparedness and response plans to mitigate the outbreak, the OCHA report reads.

The major gaps and challenges facing dengue response include funding required for integrated vector-control interventions, shortages in tools and machines needed for spraying, the need to improve the capacity/work of national and state laboratories, and the misdiagnosis and treatment of dengue fever cases due to its co-infection with malaria.

The red Sea state Ministry of Health activated taskforce meetings and developed state-level plans similar to actions against the spread of dengue fever in Kassala. The Health Ministry, the World Health Organisation, and the Ministry of Animal Resources jointly investigated locations where the outbreak has occurred.

Medical staff was trained and an isolation centre has been established in Tagadom Hospital in Red Sea state. In addition, 2,200 mosquito nets have been distributed, 1,330 houses have been inspected for breeding sites, and 3,542 homes have been fogged.

The major challenges faced are the limited number of partners involved in response activities. In addition, a more comprehensive plan needs to be developed between the government authorities and partners, OCHA states.

Saudi Arabia has announced a ban on importing livestock from Sudan in response to the announcement of World Organisation for Animal Health (OIE) concerning documented cases of RVF. 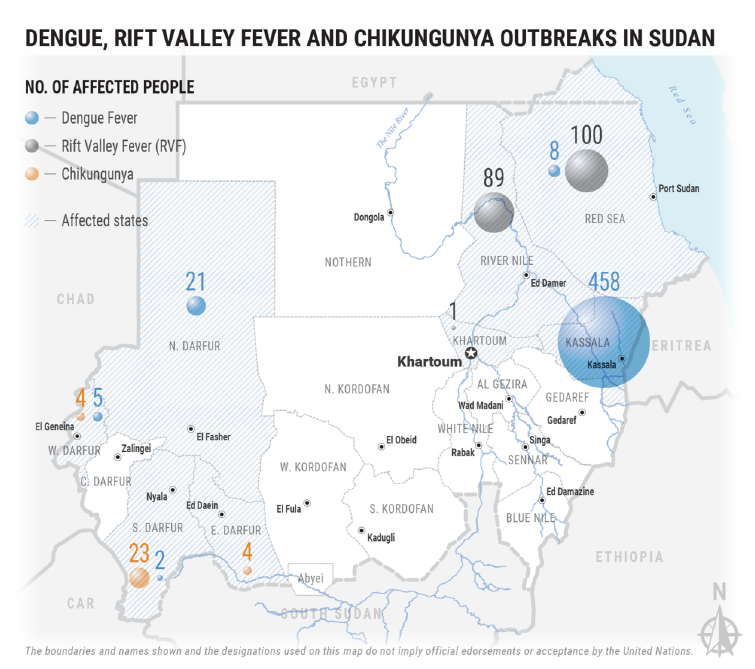 There are 31 chikungunya cases reported in South, West, and East Darfur since the onset of the disease on 2 October. Response activities, mainly vector control, are ongoing.

The Health Ministry of East Darfur, has activated a taskforce with the participation of health partners. A comprehensive response plan in being prepared by the Ministry, with technical support from World Health Organisation (WHO) and the UN Children’s Agency (Unicef). Unicef will support social mobilisation activities including household visits by trained community health promoters, awareness-raising sessions and dissemination of key message through local radio stations. In addition, mosquito nets and information materials (pamphlets, flyers, leaflets etc) will be distributed.

The chikungunya virus is spread by mosquitoes. The disease usually does not cause death, but the symptoms, fever, joint aches, and pains can be severe.

The best way to prevent chikungunya is mosquito control and avoiding bites. This may be achieved by draining stagnant waters, and using insect repellents and mosquito nets.