Sudan’s federal Ministry of Health and the World Health Organisation (WHO) are working with partners and at-risk communities to scale up surveillance of cholera in Khartoum. On November 7, the final phase of the five-year yellow fever vaccination campaign targeting more than 30 million people across Sudan was launched. According to the Sudan Metrological Authority, rainfall in the country has been persistently above average throughout most of the 2019 season.

The Sudan Humanitarian Fund has disbursed about $3 million to the WHO to fill immediate gaps in access to life-saving health and environmental health services for the communities affected by floods and the cholera outbreak.Assistance will be provided in 114 prioritised localities in 17 states.

The funding comes at a critical time as the impact of the economic crisis, recent flooding and the ongoing disease outbreaks have put a lot of strain on the public health system.

Imports of medicines have been declining for the second year in a row, according to the Central Bank of Sudan statistics, the UN Office for the coordination of Humanitarian affairs (OCHA) reported in its Sudan Situation Report update on Thursday.

The federal Health Ministry declared an outbreak of cholera on 8 September, after four of six samples taken from Blue Nile state tested positive for Vibreo cholera by the National Public Health Laboratory.

The first case was detected on August 28. The disease spread to neighbouring Sennar and to Khartoum. The total number of reported cases as of 29 October was 330, including 12 deaths.

There is a risk of the cholera outbreak spreading to Khartoum is if the outbreak is not properly managed. The Sudanese Ministry of Health and WHO are working with health partners and at-risk communities to scale up surveillance of disease in Khartoum.

To ensure that health facilities and cholera treatment centres in Khartoum are equipped to diagnose and treat suspected patients, WHO has delivered cholera medicines and supplies and rapid diagnostic tests.

“A key aspect of preventing and controlling cholera is how well at-risk communities are able to protect themselves [..],” said doctor Naeema El Gasseer, WHO Representative in Sudan.

To strengthen disease surveillance, WHO, with support from Médecins Sans Frontières, is providing refresher training for health staff and paramedics in the state. An additional 35 health staff are being trained to form Rapid Response Teams who will be the first to respond to suspected cases at locality level.

The final phase of a five-year yellow fever vaccination campaign was launched in Khartoum on November 7. Almost 7.5 million people are targeted in the seven Khartoum localities, including displaced people, refugees, and migrants.

With the launch of this final phase, all people between nine months and 60 years will have been reached with the yellow fever vaccine, which offers lifetime protection.

The vaccination campaign was led by the federal Ministry of Health and supported by WHO, UNICEF and Gavi, the Vaccine Alliance, in line with the WHO Global Strategy for the Elimination of Yellow Fever Epidemics.

Rainfall in Sudan has been persistently above average throughout most of the 2019 season, and the season continued into October past its normal end in September, reports FEWS NET.

This year, heavy rainfall and flash floods have affected more than 426,000 people, almost twice the number of people affected by floods last year, according to the government’s Humanitarian Aid Commission (HAC) and partners. 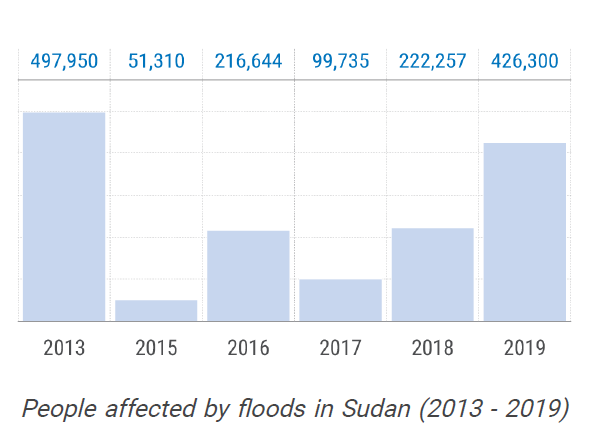 In response to the floods, the national Flood Task Force was activated and met regularly. The taskforce comprising HAC, the Sudanese Red Crescent Society, Civil Defence, and OCHA.

17 die of dengue fever in Kassala