About 11,500 newly displaced people arrived in and around Rokoro town in northern Jebel Marra during the past two weeks. The ongoing fuel shortages in Sudan are slowing down humanitarian operations in the country. The Sudan Humanitarian Fund (SHF) allocated $20 million to 45 projects in Darfur, West Kordofan, Abyei, and Kassala. More than 1,600 South Sudanese refugees arrived in Sudan in the first two weeks of April. New cases of ‘acute watery diarrhoea’ were reported in Central Darfur.

The UN Office for the Coordination of Humanitarian Affairs (OCHA) in Sudan reported in its latest bi-weekly bulletin that at least 2,280 newly displaced households (about 11,500 people) arrived in Rokoro town and nearby Jemeiza village after 18 April, following fighting between armed nomads and sedentary farmer tribes.

A joint inter-agency team that visited the area was informed that many of the homes of the displaced had been burnt. Other people have been allegedly displaced into the mountains.

Emergency shelter, non-food items, food and access to water and sanitation services are the priority needs of these newly displaced, according to the team’s preliminary findings.

There are no food supplies in the local market. The World Food Programme (WFP) sent food supplies to Rokoro on 29 April and initial food distribution for the new displaced was scheduled for 30 April.

In South Kordofan, some INGOs are not able to access their pre-positioned fuel stocks stored at fuelling stations in the state capital, Kadugli. They are only allowed to receive a limited amount of fuel, not considered enough for their operations. The UN Interim Security Force for Abyei (UNISFA) has agreed to supply fuel to all UN agencies based in South Kordofan.

Fuel shortages are likely to affect various aspects of humanitarian operations across Sudan. For instance, lack of diesel for generators and water pumps will impact the cold chain for vaccines and could lead to shortages of water for drinking, livestock and agriculture, which will eventually impact food security.

The UN Food and Agriculture Organization (FAO) said in its Early Warning Early Action report on food security and agriculture for April-June 2018 that the scarcity of fuel and subsequent increase in production costs could threaten the 2018-2019 agricultural season. This will further impact the availability and price of food, and increase rural-to-urban movement in search of employment, FAO said.

In its latest update FEWS NET reports that food prices are likely to continue increasing more rapidly than usual from April through September 2018 – caused by the high transportation costs resulting from severe fuel shortages during March and April. 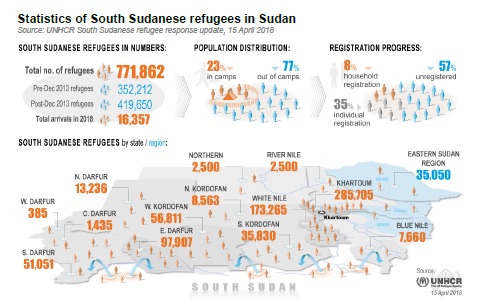 According to the UN refugee agency (UNHCR), more than 1,600 South Sudanese newly arrived in Sudan in the first two weeks of April – bringing the total number of South Sudanese refugees in the country to about 771,900.

While this is a slower rate than observed in 2017, the flows continue to be steady, OCHA states.

AWD cases reported only in Central Darfur during March

After assessing the situation in all 18 states, 17 localities from nine states have been identified for an Oral Cholera Vaccination campaign, targeting refugees and host communities. Vaccination will be carried out during 2018-2019. the OCHA bulletin reads.

Sudanese in Holland protest human rights violations in their country