The spread of Acute Watery Diarrhoea (AWD) in Central Darfur has been halted. People in parts of eastern and western Sudan will face crisis levels of food security through September. The refugee camps for South Sudanese in White Nile and East Darfur states will be extended. The UN Mine Action Service (UNMAS) has cleared about 80 per cent of the known landmines and unexploded ordinances (UXOs) in Sudan. The Ngok Dinka and Misseriya tribes signed a peace agreement in Abyei in early March.

The UN Office for the Coordination of Humanitarian Affairs (OCHA) in Sudan reports in its latest biweekly bulletin that quick action by the Sudanese government and the UN has been instrumental in curbing a new outbreak of Acute Watery Diarrhoea (AWD*) in Jebel Marra in Central Darfur in February. 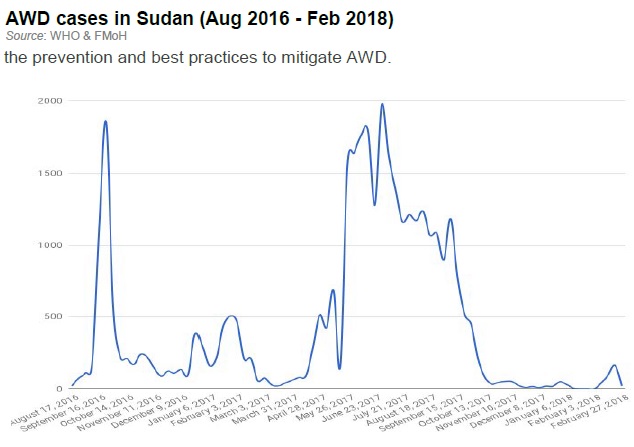 Sudan’s federal and state Ministries of Health, together with the World Health Organization (WHO), the UN Children’s Agency (Unicef), and health sector partners responded to the outbreak with an aggressive response strategy.

The measures included the establishment of isolation centres, examination centres in schools, bolstering water quality control and filtering, rapid response training in nine Central Darfur localities, and close monitoring of the situation on the ground.

Preparations and planning for the upcoming rainy season are also underway.

The Central Darfur Health Ministry has estimated it will need SDG 3 million (about $102,500) and requested support from WHO and Unicef. WHO has committed SDG 2.9 million SDG.

* Radio Dabanga reported earlier that in spite of numerous independent confirmations that the infectious disease that turned into epidemic proportions in Sudan last year was cholera, the Sudanese authorities and several international organisations still call it ‘Acute Watery Diarrhoea’.

In South Kordofan areas controlled by the Sudan People’s Liberation Movement-North (SPLM-N) food security levels are expected to reach emergency levels among displaced in the region in the period between June and September.

Government authorities have granted permission for the extension of South Sudanese refugee camps in White Nile and East Darfur states.

Italy gives way to US chairmanship of Mine Action Sudan

At least 105.7 sq km of dangerous areas and 37,898 km of roads have been cleared in Sudan of various types of landmines and unexploded ordinances (UXOs), providing unhindered passage and the freedom to cultivate land and graze livestock to hundreds of thousands of people living in fear of mine accidents.

In a meeting with the donor community and the UN Resident and Humanitarian Coordinator, the UN Mine Action Service (UNMAS) together with Sudan’s National Mine Action Center (NMAC) said that 20 per cent of known contaminations remain to be handled, most in South Kordofan and Blue Nile states.

The meeting served to launch Sudan’s pledge for an extension to their time-bound commitment to clear the country of landmines and UXOs for good, previously set for the end of 2018. The meeting also celebrated the hand-over of the Sudan Mine Action chairmanship from Italy to the USA.

To resolve a conflict involving access to pasture and water, representatives from the Ngok Dinka and Misseriya communities signed a peace agreement in Abyei on 5 March.

The signing took place during a three-day migration conference, held in Abyei under the auspices of the International Organization for Migration (IOM) and the UN Food and Agriculture Organization (FAO).

Humanitarian partners in Abyei are working on increasing the resilience of affected agro-pastoralist and nomadic communities through tailored approaches based on people’s specific needs and vulnerabilities.