In Sudan’s El Gedaref state, an estimated 24,000 people have been affected by heavy rains and flash floods in El Faw, El Mafaza and El Hawatah areas. An inter-agency mission visited the state between 4-6 September to assess the needs of people in the three areas, according to the latest bulletin of the UN Office for the Coordination of Humanitarian Affairs (OCHA) in Sudan.

El Faw and El Mafaza areas are prone to flooding as they are in low-lying areas and have experienced flooding in 2013 and 2017 when the Alrahad River and its tributaries burst their banks.

In the areas visited, flood waters have affected basic services and infrastructure, including water, sanitation, livelihood, education and health services. Some health facilities sustained damage but are able to function and provide main services. However, physical access to some health centres is difficult due to poor road conditions. The affected people were found to be consuming water straight from the canal, which is polluted with flood waters and poses a serious health hazard. Sanitation conditions are also poor—especially with the collapse of many household latrines—and pose a health concern such as potential contamination of water sources and water-borne diseases.

About 52 per cent of the cultivated land in the affected areas has become water logged, impacting the livelihoods of farmers and farmworkers who depend on farming for their income. Combined with the increase in prices for basic commodities—due to the current economic conditions—the affected people are finding it hard to buy the most basic supplies. Traders attribute the increase in prices due to the massive surge in transport costs for both passengers and goods. For example, the fare from El Faw town to a nearby village has reportedly quadrupled, from 30 to 130 Sudanese Pounds (SDG)— equivalent to US$ 1.7 and $7.22 respectively.

The State Government in Gedaref—in partnership with the Civil Defence Forces, volunteers from the SRCS and other civil society organizations—have been responding to meet the needs and mitigating the impact of the floods in the state. The response includes establishing temporary flood defences to protect properties; deploying equipment to assist with water drainage; providing medicine; distributing food items (sorghum)—enough for two days; deploying a team of engineers and workers to fix damaged roads end ensure accessibility; dispatching a helicopter to assist with response efforts in difficult to reach areas; and instructing providers of basic services to work in 24- hour shifts.

An inter-agency assessment mission requested by the Gedaref State authorities with the UN Refugee Agency (UNHCR), the World Food Programme (WFP), the UN Children’s Agency (UNICEF), the World Health Organization (WHO), the Sudanese Red Crescent Society (SRCS), line ministries and local authorities found out that about 24,000 people were affected by floods in Gedaref. Overall, 195,000 people in 15 of Sudan’s 18 states have been affected by heavy rains and flash floods as of 19 September, according to the Government’s Humanitarian Aid Commission (HAC). The worst affected states are Kassala (47,500 people), Gedaref and West Kordofan (24,000 people).

There were also distributions made by Federal HAC, including 500 plastic sheets, 500 sleeping mats, 3,000 kg of lentils and 150 cartons of cooking oil. The State Government distributed 20 tents, 1,200 mosquito nets and 600 jerry cans.

The State Ministry of Health (SMoH) has provided chlorine for the treatment of water at the household level, but the quantities are insufficient to meet all needs. There are critical gaps in supplies of emergency shelter and essential household supplies that need to be addressed urgently, according to the mission findings. Food assistance is also required. A Floods Task Force Forum (FTF) meeting will be held soon to collectively discuss the latest updates, response and how to mitigate gaps.

Between 14-19 September, UNHCR distributed emergency shelter and household supplies to an estimated 800 most vulnerable families (benefiting about 4,000 people) affected by heavy rains and flash floods in El Faw, El Mafaza and El Hawatah areas of Gedaref State. Supplies were not enough to cover all needs, so the focus was on assisting the most vulnerable people, with distributions carried out by the SRCS. Supplies distributed included 3,000 blankets, 6,000 mosquito nets, 1,000 jerry cans, 900 plastic sheets, 1,500 sleeping mats, 200 cartoons of cooking utensils, and 10,000 pieces of soap. 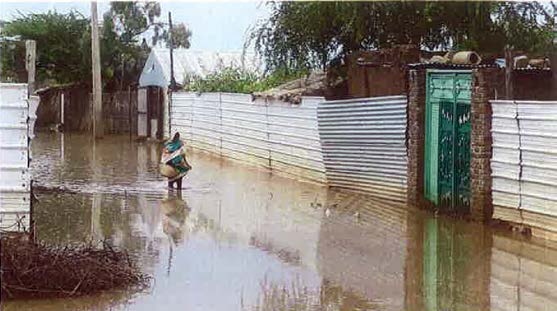 In addition, from 3 to 4 September UNHCR—through SRCS—distributed full emergency shelter and household supplies kits to 321 families (about 1,600 people) affected by heavy rains and flash floods in El Meiram town in West Kordofan State. The beneficiaries included 187 families from the host community and 134 South Sudanese refugee families. Support included mosquito nets and pesticides from the SMoH and food from Zakat Chamber in El Meiram.

The heavy rains and flash floods have also damaged classrooms, destroyed teaching and learning materials, latrines and fences in schools in different parts of the country. Nearly 33,000 students (19,000 girls) in 95 schools throughout the country were reported to have been affected, according to UNICEF’s latest humanitarian situation report.

In West Kordofan and North Darfur states, UNICEF distributed emergency education supplies in 23 schools that have been severely affected by floods, benefiting11,300 students (6,000 boys and 5,300 girls). Supplies include teaching and learning materials and tarpaulins for the roofing of damaged school buildings, allowing students resume their studies within a short period of time. Meanwhile, plans are underway to rehabilitate or construct 33 semi-permanent classrooms in the affected schools to provide longer-term solutions for the damage caused by the heavy rains and floods.

Above-average rainfall has damaged crops in some areas, FEWS NET

Widespread flooding from the above-average seasonal rainfall has caused crop damages and losses across the country, but the amounts have yet to be quantified, according to FEWS NET in its latest East Africa Seasonal Monitor. In addition, loss of livestock has been reported due to flooding at the end of August in areas around the Atbara and Dindir rivers. On a positive note, the floods have provided an excellent opportunity for recession cultivation—planting in flooded areas after the waters recede—especially for vegetables. Overall, most crops are in vegetative to reproductive stages and in generally good conditions, FEWS NET reported. 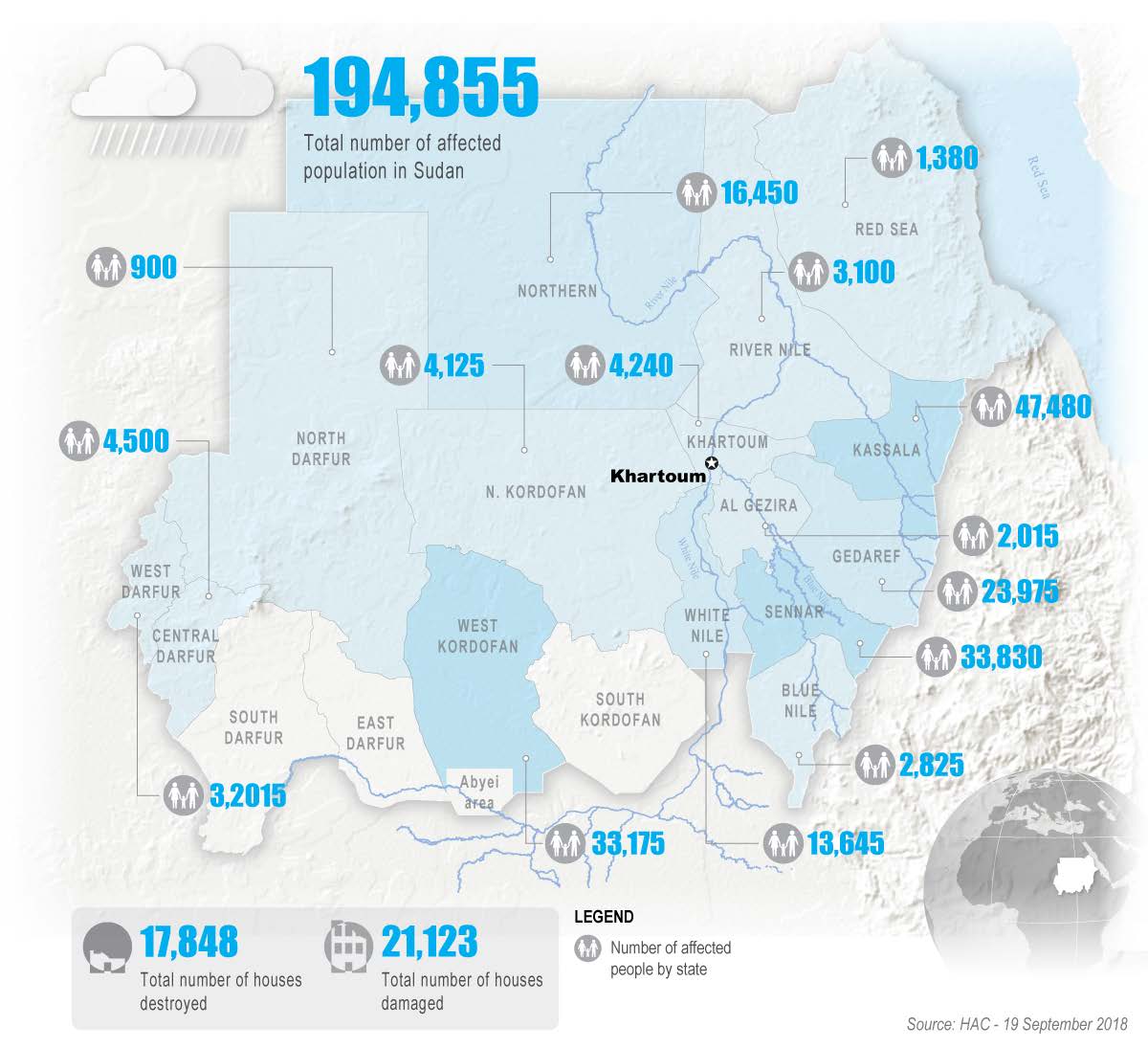 On 23 September, an inter-agency team the team comprised of OCHA, UNHCR and UNAMID, reached the villages of Wadi Tuliba and Tagulei in East Jebel Marra that were hit by landslides following heavy rains in early September. This was possible only after the Sudan Liberation Army – Abdel Wahid (SLA-AW) on 20 September announced a unilateral cessation of hostilities to facilitate the access of aid agencies to the people affected. The two villages are in a mountainous area where access and logistics are complicated by lack of roads and difficult terrain. SLA-AW-controlled areas of the Jebel Marra massif—straddling parts of North, Central and South Darfur states—have been inaccessible to aid organizations for many years.

people), including tents and plastic sheets for shelter, kitchen sets, jerry cans, blankets and mosquito nets, and treated the injured and ill. Sixteen people were killed by landslides, with reports of more people injured or sick, with several homes destroyed by the disaster and livestock lost. Humanitarian agencies will continue providing the landslide-affected people with humanitarian assistance and other support, including food and non-food relief aid, from nearby villages.

With significant contamination by landmines and explosives remnants of war remaining in South Kordofan and Blue Nile, the United Nations Mine Action Service (UNMAS) has switched its focus to the two states, the first and second most landmine-contaminated states respectively in Sudan. This contamination further restricts limited humanitarian access, preventing humanitarian and development aid from reaching people in need of assistance.

Thanks to the commitment of the Government of Sudan and support from the donor community, including the UK Department for International Development (DFID), Japan, the United States Agency for International Development (USAID) and Italy, UNMAS and the National Mine Action Centre (NMAC) are ready to launch land release operations in the two states as of October. On 11 and 19 September, a high-level delegation including the Ambassador of the United Kingdom, the United States Deputy Chief of Mission, the USAID Director and representatives from the embassies of Japan and Italy travelled to Kadugli and Ed Damazin to seek the support of local governments and the Sudanese Armed Forces (SAF) for the upcoming land release operations.

The acting Governors of South Kordofan and Blue Nile states and the deputy Commanders of SAF in South Kordofan and Blue Nile reiterated their support to humanitarian mine action activities. They assured the delegation that deminers will be able to work safely in government-controlled areas and restated the government’s commitment to its obligations under the Anti-Personnel Mine Ban Convention.

In South Kordofan, the delegation also visited Lufo Gharib, a village close to Kadugli, which was demined in April 2018. Lufo Gharib is an example of joint UN programming, where humanitarian demining was followed by the United Nations Development Programme (UNDP) Community Security and Stabilization Programme focusing on recovery and rehabilitation for the benefit of the vulnerable population through provision of water and livelihood opportunities.

The upcoming operations will enable local communities to regain access to the land for productive use, such as animal grazing and farming, and will open access for further humanitarian and development projects. Mine action activities also include mine risk education—to promote safe behaviour among the populations living with the threat of explosives—as well as psychological, physical and socio-economic support to landmine survivors.

A group of 16 refugees representing South Sudanese refugees in Sudan, Uganda, Kenya, the Democratic Republic of Congo (DRC) and Central African Republic (CAR) urged the parties of the South Sudan peace agreement to honour the agreement and support a durable peace that would end their displacement.

and other political parties and stakeholders from the civil society in South Sudan during the recent peace talks in Khartoum. This meeting was facilitated by UNHCR in collaboration with the Ministry of Foreign Affairs (MoFA), the Commissioner of Refugees (COR) and the Intergovernmental Authority for Development (IGAD).

The refugees were free to express their concerns, inspirations and ambitions about the future of South Sudan after the signing of the peace agreement and were very happy to get assurances from the South Sudanese leaders that there will be no more suffering in South Sudan.

“Refugees expect a lot of trauma healing activities to take place in South Sudan before taking the decision to return home,” Margaret Wani Ambi, a 62-year-old South Sudanese refugee lady in Khartoum, told the South Sudanese leaders. “We are citizens of South Sudan and because of that we need to be able to own this peace process and understand what the agreement is about and how peace will be realized in South Sudan,” explained Margaret.

The refugee representatives expressed their readiness to play a greater role in the awareness-raising and rebuilding trust amongst South Sudanese communities. They recommended that the agreement be translated into simple Arabic and other dialects spoken in South Sudan, and to disseminate the text among the South Sudanese communities in South Sudan and in exile. The refugees appealed to the international community to continue to stand by the people of South Sudan and told the R-ARCSS that they will return to South Sudan only if they see a change in the situation on the ground and feel a strong commitment to the agreement by all parties.

The total number of South Sudanese refugees in Sudan is 762,900, according to UNHCR’s latest South Sudanese population dashboard as of 15 September 2018.