In anticipation of the rains, a monthly Flood Task Force (FTF) composed of humanitarian partners -under the auspices of the governmental Humanitarian Aid Commission (HAC)- was reactivated in late June to put in place a four-month flood contingency plan for the country.

The UN Office for the Coordination of Humanitarian Affairs (OCHA) in Sudan reported in its latest bulletin that at least 99,000 people affected by floods were assisted in 2017. For this year, based on review of trends from 1994-2017, and a regional forecast, the FTF estimates that 200,000 people will be potentially affected by floods.

The rainy season in Sudan began in late June and is expected to last until early October. A presentation by the Sudan Metrological Authority showed that most parts of Sudan are expected to receive above normal rainfall this year.

At least 6,000 homes in West Kordofan and Kassala states have been affected by recent heavy rains and floods, according to HAC.

Heavy rains affecting supplies, fuel shortages, and high consumer price inflation are causing a depletion of food stocks associated with a rise in food insecurity, according to the South Kordofan-Blue Nile Coordination Unit.

Approximately 20-30 per cent of the displaced and poor households in areas controlled by the Sudan People’s Liberation Movement-North (SPLM-N) have been facing supply bottlenecks, which are estimated to continue until September. 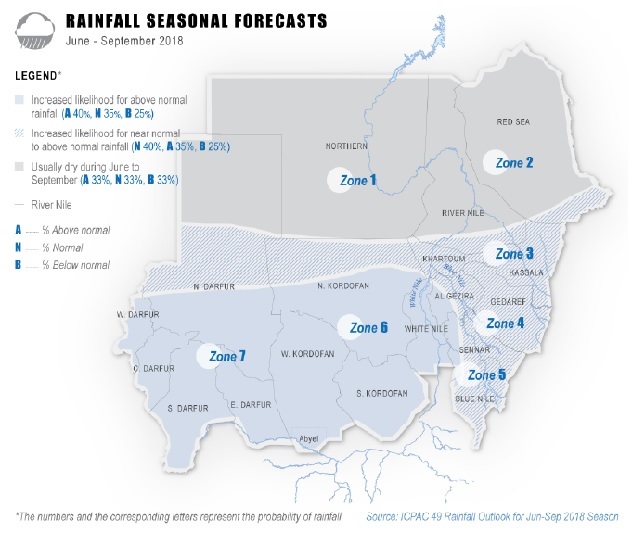 According to FEWS NET they are in Emergency (IPC Phase 4) levels of food security. Furthermore, the conflict in South Sudan and high inflation is further affecting the livelihood opportunities for communities in Blue Nile and the southern parts of South Kordofan.

In anticipation of the rainy season, WFP has begun pre-positioning 84,590 Mt of food to ensure the continuation of food distribution and nutrition programmes around the country, before road conditions deteriorate and become impassable.

By 12 July, WFP dispatched 57,919 Mt of food to its warehouses across Sudan, including cereal, pulses, salt, oil and nutritional supplements, 68 per cent of the planned tonnage.

As of the second week of July, 27,219 Mt had already been received, and the remaining 26,671 Mt are expected to be dispatched and delivered by the first week of August.

The new displaced are currently hosted in the basic school of Golo, which is overcrowded and without access to sanitation facilities. Local authorities and displaced community leaders are currently negotiating their relocation to another area.

4.2 million children across Sudan to be vaccinated against polio this year.

In order to maintain the country's polio-free status since 2015, a national immunisation campaign was launched in July. Between 16-18 July, about 23,500 health workers will conduct house-to-house visits to administer the vaccine to children under five years.

Sudan remains at risk of wild polio virus because large numbers of people -including displaced people and refugees- are moving throughout the country, and therefore sometimes inadvertently left outside vaccination campaigns.

Keeping Sudan polio-free has been a priority for the Sudanese government, the World Health Organization (WHO), and the UN Children’s Agency (Unicef), OCHA states. They were able to start with the campaign because of the generosity of partners such as the Bill and Melinda Gate Foundation, Rotary International, and health partners Global Alliance for Vaccination and Immunization (GAVI), the UK Department for International Development (DFID), the US Agency for International Development (USAID), and the Norwegian Agency for Development Cooperation (NORAD).