The UN Office for the Coordination of Humanitarian Affairs (OCHA) reported in its first biweekly bulletin of this year that about 2,500 displaced Darfuris returned safely to Turba village in El Wehda locality in South Darfur. In East Jebel Marra however, 600 people fled their homes since mid-December 2017. Furthermore, the number of Acute Watery Diarrhoea cases continue to decline in the country. The Sudan Humanitarian Fund has announced the strategy for the first standard allocation for 2018.

The Voluntary Return and Resettlement Commission (VRRC), with the support of the Sudanese NGO Manal, facilitated the return of the about 500 families from a camp in North Darfur’s Shangil Tobaya to their home village.

A mission led by the VRRC, supported by the Recovery, Return and Reintegration (RRR) sector, will be conducted soon to assess the conditions of return and to be better informed on Government and communities plans for the area which will ensure the sustainability of the return.

The VRRC in West Darfur will replace the governmental Humanitarian Aid Commission in co-leading the RRR sector, together with the UN Development Programme (UNDP).

The federal VRRC Commission who reports to the President’s office is responsible for the voluntary return of displaced people and refugees; the comprehensive assessment of return areas; and the implementation of early recovery programs.

This mainly entails the second phase package of the Darfur Development Strategy (DDS) which includes the provision of basic services such as construction of water yards, schools, health units and police posts.

More than 600 people (129 families)—mostly women and children—fled East Jebel Marra to Otash camp for the displaced near Nyala, capital of South Darfur, since mid-December 2017.

UN agencies and international aid organisations carried out a humanitarian needs assessment of the new displaced – who said they fled their homes in the Deribat area because of internal fighting that broke out among factions of the Sudan Liberation Movement led by Abdelwahid El Nur in the area in November 2017.

While the new displaced are receiving assistance from relatives living in the camp, some have also found work as casual labourers in Nyala. This is not sufficient to meet needs, owing to the high food prices, said the humanitarian team in its assessment report. 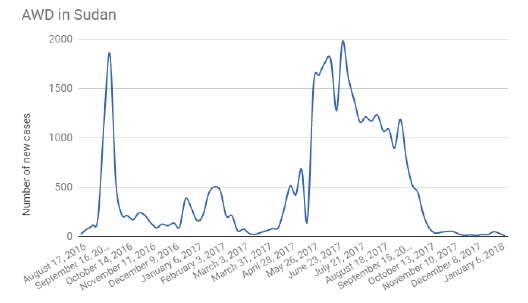 The number of reported Acute Watery Diarrhoea [cholera] cases remains low across Sudan, with 98 cases registered during the last four weeks (17 December 2017 – 13 January 2018), according to the federal Ministry of Health and the World Health Organization (WHO).

An assessment of the situation in Red Sea State is urgently required given the persistent cases of AWD over the past six weeks in the area, the OCHA bulletin reads.

The Sudan Humanitarian Fund (SHF) announced the strategy for its first standard allocation of funds for 2018 for a total of $3 million.

The strategy focuses on the needs of South Sudanese refugees in White Nile State ($1.5 million) and prevention of waterborne diseases in West Kordofan, Red Sea and White Nile states ($1.5 million). The allocations aim to address the most urgent needs in Sudan before the start of the rainy season. The two priority interventions of this strategy are closely aligned with the 2018 Humanitarian Response Plan as well as the South Sudanese refugee response plan.

In 2017, SHF allocated $29.6 million for 89 projects across Sudan which provided lifesaving and other assistance to 2.2 million people.