On 17 February, the Sudanese government launched national standard operating procedures on gender-based violence prevention and response. The UN Food and Agriculture Organization requests $9 million for desert locust response in Sudan. According to Sudan’s Ministry of Agriculture, the national production of sorghum and millet in the 2019/20 season is less than last year. A UN Sudan map with all 189 localities is now available.

It is the first time that a Sudanese government endorsed operating procedures on gender-based violence (GBV) prevention and response, the UN Office for the Coordination of Humanitarian Affairs (OCHA) in Sudan reports in its latest Situation Report.

The new measures establish the procedures, roles, and responsibilities of each actor involved in GBV response. They will be used together with existing national and international guidelines for the prevention of and response to GBV.

The launch was presided by the Minister of Labour and Social Development, Lina El Sheikh, who stressed that women's rights are a priority for Sudan and that women played a pioneering role in building society.

She also noted that that GBV is one of the greatest challenges in society and in endorsing the national standard procedures a move has been made to achieve justice and women's rights.

The Minister stressed that professionals and volunteers at all legal, health and social levels are responsible for the application of the standard procedures to address GBV. 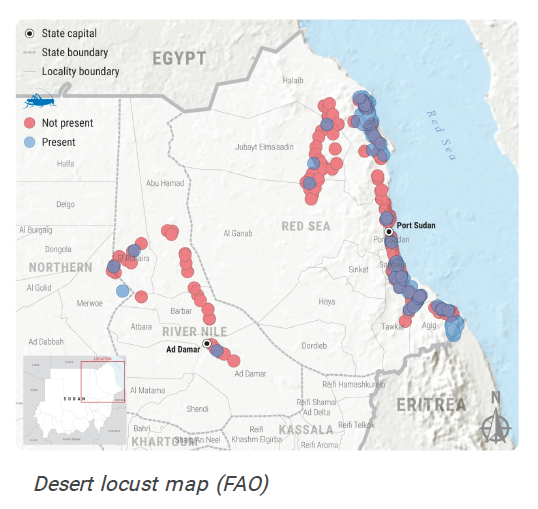 Desert locust breeding continues along the Red Sea in Sudan and poses a serious threat to crop and livestock production in an area that is already highly food insecure, the OCHA report reads.

For response in Sudan, the UN Food and Agriculture Organization (FAO) has requested $9 million to support control measures, safeguard livelihoods and promote early recovery - in addition to the appeal calling for $138 million for rapid response and anticipatory action in the Greater Horn of Africa.

Intensive surveillance of locust breeding areas as well as effective ground and aerial control operations are urgently needed in order to detect and reduce locust populations, prevent more swarms from forming and avoid the spread of the pest to

crop and pasture areas. Unless sustained control operations are carried out, significant agricultural losses are likely. This would exacerbate already high levels of food insecurity, particularly in rural areas.

The Sudanese government has been leading the response, with surveillance conducted on one million hectares and ground and aerial control operations treating about 300,000 hectares with pesticides. Currently, the government needs more vehicles (for spraying), pesticides, field equipment, and funds for operational expenses.

According to the Ministry of Agriculture and Natural Resources’ food supply assessment for Sudan, the national total production of sorghum and millet in 2019/20 is estimated at 5.1 million tonnes, which is 36 per cent below the previous year’s record output and 18 per cent less than the past five-year average.

This could have serious effect on the food security in the country, the UN Office for the Coordination of Humanitarian Affairs (OCHA) in Sudan states in its latest Situation Report.

Overall, 162 localities from 17 states have been classified out of the 18 Sudanese states.

The decline in production can be attributed to farmers shifting crop production to more remunerative cash crops, the high and increasing inflation, and fuel shortages in the 2019/20 agricultural season, as well as pests, diseases, and weeds in the 2019 summer cropping season.

The Geographic Information System team at Sudan’s Central Bureau of Statistics, the National Information Centre, the Ministry of Federal Governance, the Sudanese Survey Authority, in cooperation with the UN Children’s Agency (Unicef) and OCHA collaborated to update the administrative boundaries for a new map of Sudan.

The updated map reflects the agreed boundaries for all 18 states and 189 localities in the country. 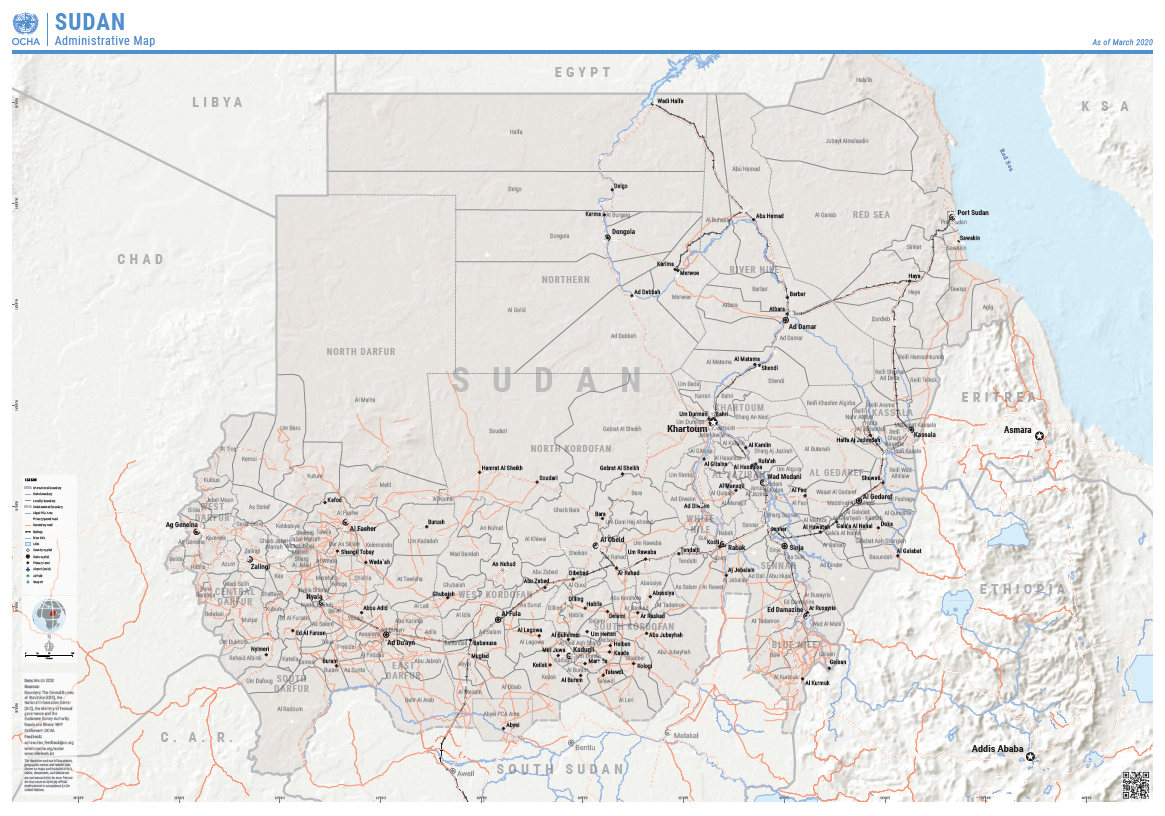