OCHA Sudan: High prices will stay as 2019 harvest was ‘not favourable’

Food prices in Sudan continue at its high level, the UN Office for the Coordination of Humanitarian Affairs (OCHA) in Sudan reported in its latest Situation Report. The Sudan Humanitarian Fund has completed its monitoring mission in Central Darfur’s Jebel Marra. According to the International Organisation for Migration, 37,900 people are displaced in El Geneina, capital of West Darfur.

Prices of locally grown sorghum and millet continued to increase in December 2019 and January 2020, despite the recently concluded 2019 harvest, according to the most recent issue of the Food Prices Monitoring and Analysis (FPMA) Bulletin by the Food and Agriculture Organisation (FAO).

Prices of imported wheat also rose further in January and at faster rates, surging by 20 per cent. In general, prices of cereals reached record highs, up to twice the already high levels of one year earlier. This was mainly triggered by a poor 2019 cereal output and a weak currency, coupled with fuel shortages and high prices of agricultural inputs inflating production and transportation costs, according to FPMA.

According to the preliminary findings of the government-led Crop and Food Supply Assessment Mission, the 2019 coarse grains (sorghum and millet) production is estimated at about 5.2 million tonnes, 36 per cent below the bumper 2018 output and 18 percent below the average of the previous five years. 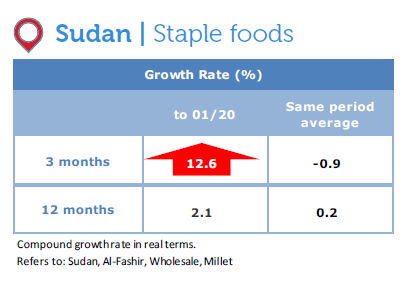 FEWS Net reported earlier this year that according to available field information, yields for key cereals, such as sorghum and millet, are lower than usual this season due to flooding, an extended rainy season, and pest infestations. In addition, field reports suggest increases in area planted in cash crops have led to decreases in area planted for cereal crops, which is likely to drive further declines in cereal production compared to previous years.

Meanwhile, the World Food Programme (WFP) reported in its Market Monitor for January 2020 that high prices are likely to stay and continue at its high level as the current season harvest is not favourable. The national average retail price of sorghum was SDG 26.87 per kilogramme, an increase of 15 per cent compared to the previous month.

According to the 2020 Humanitarian Response Plan (HRP), 6.2 million people across Sudan will need food and livelihoods assistance. HRP partners aim to provide food and livelihood assistance to 4.7 million most vulnerable people. As of 26 February, the 2020 HRP is only 8 per cent funded, with $1.24 billion requirement unmet.

Humanitarian access for people in need and humanitarian actors in Central Darfur’s Jebel Marra area continues to improve. The Sudan Humanitarian Fund (SHF) conducted a monitoring mission in the area at the end of January 2020.

Road transport between Golo and Nierteti has progressively improved in the last six months allowing for better movement of people and goods between the two areas, OCHA states.

Youth would like income generating activities to assist them build their skills and provide for their families. The community also requested the timely distribution of seeds and other agricultural tools to coincide with the rainy season.

Since 10 January, the International Organisation for Migration (IOM) has been monitoring the displacement of newly displaced people in West Darfur.

As of 25 February, IOM has estimates that there are 37,908 people (8,250 families) from 11 locations taking refuge across 35 displacement sites in El Geneina town.

Reports from the humanitarian actors on the ground suggest that displaced whose homes were unaffected are now returning to their locations of origin.

Psychosocial counselling and follow up on protection issues and cases are also being carried out. Partners have established child friendly spaces in six sites.