While the Transitional Military Council and the Alliance of Freedom and Change are negotiating the near future of Sudan, close to six million people in Sudan are suffering from hunger.

On April 16, five days after President Omar Al Bashir was ousted from power in a military coup, The New Humanitarian (formerly IRIN news), stated that the humanitarian needs in Sudan “have remained stubbornly high for years, using up an average of over $600 million in donor funding in each of the last five years, just to tackle immediate priorities, including food aid, health, and education”. 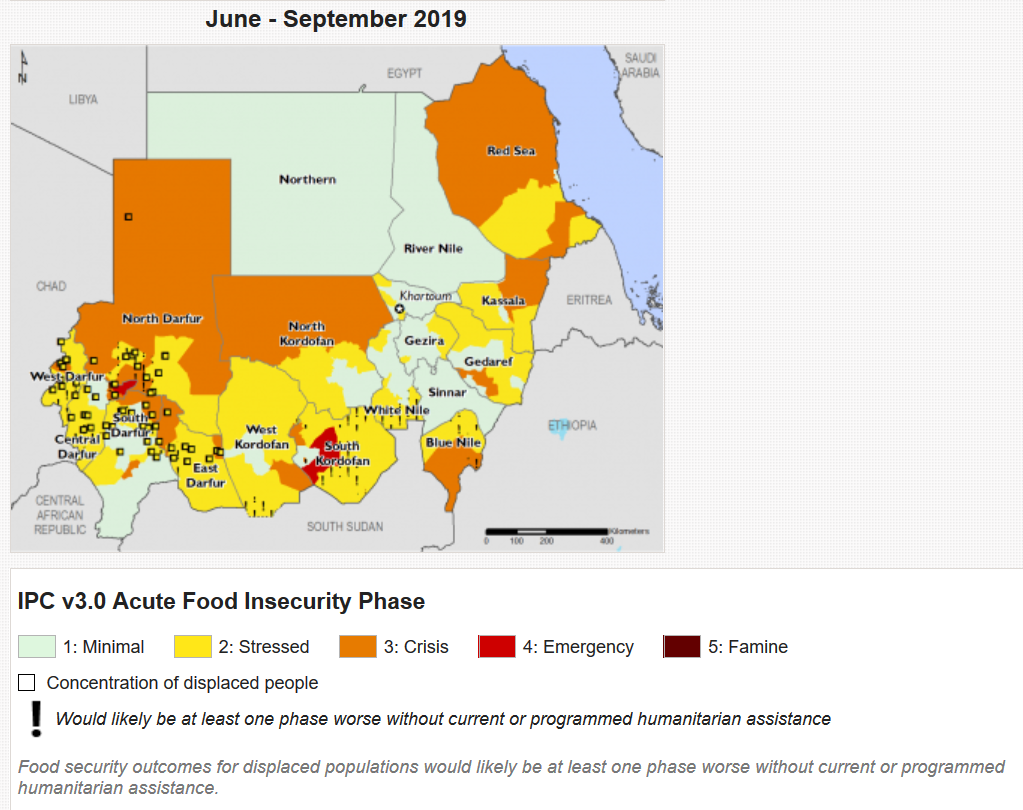 Macroeconomic conditions are extremely poor, according to the Famine Early Warning System Network (FEWS NET): about 13 percent of the population (5.76 million people) are in crisis or emergency levels of hunger.

In addition, the Sudanese Pound is rapidly depreciating against the Dollar, bread prices have jumped since the government lifted subsidies on imported wheat, and fuel price hikes have almost doubled the cost of transport.

There is already a "fast deterioration in living conditions in urban areas due to the economic situation," an UN official told The New Humanitarian in early April, adding that the limited availability of banknotes is also slowing the wider economy and relief operations.

“The bread price rise was the final straw for much of the urban-based population in Sudan,” explained World Food Programme country director Matthew Hollingworth. “The humanitarian and development needs of the people of Sudan must be prioritised – particularly right now – to stabilise sections of the population through this transitionary period.”

“Sudan is so much more than the capital,” said Aly Verjee, a researcher on Sudan and South Sudan at the US Institute for Peace. “If Sudan's patterns of governance do not change, the aspirations of millions of marginalised Sudanese will still not be met.”

Some of the pressure on the poorest and most vulnerable is contained by international humanitarian aid, such as the Central Emergency Response Fund (CERF), but an opening up of financial assistance is limited by USA sanctions against the country.

Hollingworth of the UN World Food Programme warned that Sudan’s economic problems may risk spreading to other areas, causing “wider civic and military instability and endangering the pillars of a cohesive society”.

Kamal Sadig, editor-in-chief of Radio Dabanga, has also pointed to millions of people who fled economically impoverished areas on the periphery to the capital Khartoum. These extremely poor people could “form a strong new opposition should the transitional government not address their demands,” he stated earlier this month.

UN states and donor nations currently pay over $1.5 billion a year to contain conflicts and humanitarian needs in Sudan. The UN and NGOs have prepared a humanitarian response plan for 2019 to support 4.4 million people. The final draft, with a price tag of about $1 billion, was under review by the government before the political crisis erupted on 6 April, the UN official said. The cost of the appeal was similar to recent years.

According to the latest bulletin of the UN Office for the Coordination of Humanitarian Affairs (OCHA) in Sudan, the World Food Programme (WFP) is facing severe funding shortages for its emergency cash transfer programmes for about 350,000 displaced people and refugees in the country.

Without increased financial support for these activities, WFP will be forced to scale back cash programming, reduce coverage and transfer values, and will need to shift to the provision of in-kind food as a last resort. The agency has worked with several banks in Sudan to secure cash assistance for the most vulnerable, overcoming liquidity shortages in the country, OCHA stated.

How did civil discontent propel Sudan towards the overthrow of Al Bashir?