During a visit to Khartoum yesterday, the Italian deputy Minister of Foreign Affairs, reinforced Italy’s support for education, peace and stability, and livelihoods in Sudan.

FA Deputy Minister Emanuela Claudia Del Re inaugurated a new block of the Mayo Girls Basic School in Mayo district in the southern part of Khartoum, and signed a new UNDP-Italy agreement – seeing a further €1.3 million committed for peace and social stability projects in Khartoum state and South Darfur.

The focus for this work will include job and community infrastructure creation, and peacebuilding, the UN Development Programme (UNDP) in Sudan and the Italian Agency for Development Cooperation (AICS) reported in a joint press release on Friday.

Speaking at the inauguration, alongside Sudanese and UNDP officials, Deputy Minister Del Re said Italy is committed to supporting education, as education is the best investment, we can make to give a better chance to our children, and promote resilience to future radicalization and violent conflicts.

Alongside the school block inauguration, the deputy minister met with Mayo youth and women who have taken part in vocational training for leatherwork and commodity product creation, intended to develop livelihoods and new opportunities. 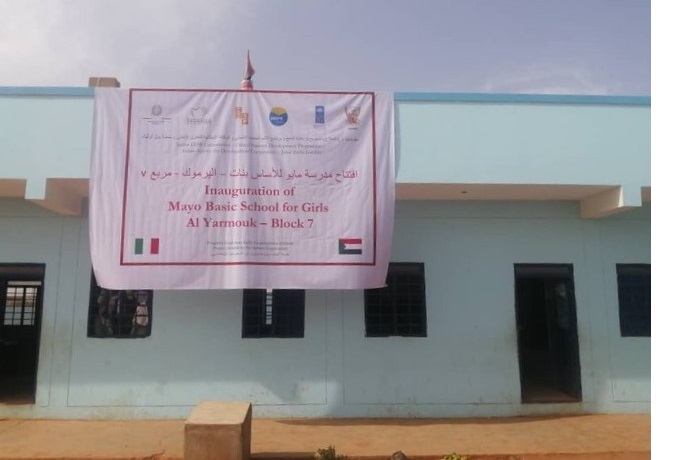 Del Re was joined at the event by Lt Gen Ahmed Abdeen, Governor of Khartoum, and Lt Gen Hussameldin, Commissioner of Jebel Awlia locality. The ceremony was attended also by Ambassador of Italy Gianluigi Vassallo, UNDP Resident Representative Selva Ramachandran, and the head of the Italian Agency for Development Cooperation in Khartoum, Vincenzo Racalbuto.

The new school block and vocational training were funded by Italy in partnership with UNDP and the Sudan Disarmament, Demobilization and Reintegration Commission. These and the new agreement are just a small part of Italy’s support for UNDP's work, specifically its Community Security and Stabilisation Programme (C2SP) which supports communities most at risk of becoming involved in conflict.

During the ceremony, UNDP’s Ramachandran thanked Italy for their support. He also highlighted the success of C2SP, particularly its expansion to 55 more communities across Sudan, supporting greater results in community-level inclusive development, youth employment, displaced population support, and women’s empowerment.

The governor of Khartoum echoed thanks to Italy and UNDP for their commitment to Mayo, and said that it is our joint duty to ensure inclusive and equitable quality education, and promote lifelong learning opportunities for all.

OCHA Sudan: 800 Nuba children can resume their education thanks to Unicef, WFP